"With marijuana being such a big issue, I think I could be a really good spokesperson to defend Justin Trudeau from all the attacks." -- Jodie Emery, marijuana activist and potential federal Liberal candidate 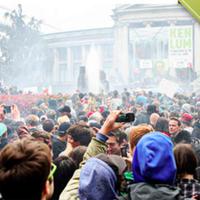 BC Ready to Experiment with Pot Reform: Poll

The self-proclaimed "Prince and Princess of Pot" -- marijuana legalization activists Marc and Jodie Emery -- plan to help federal Liberal leader Justin Trudeau, but that may instead make his chances of becoming prime minister go up in smoke.

Marc Emery is scheduled to get out of a Louisiana jail and return to Canada today after a stiff five-year sentence for dealing marijuana seeds into America by mail.

Meanwhile, Jodie Emery anxiously awaits word from a Liberal Party of Canada, ahem, "green light" committee on whether she can run for Trudeau's team in the Vancouver East riding against veteran New Democrat MP Libby Davies, herself a champion of decriminalization for years.

The Emerys also announced they will exact "political revenge" on Conservative Prime Minister Stephen Harper by touring across Canada, urging voters to support Trudeau in the 2015 election because he promises to legalize marijuana.

But Trudeau should immediately distance him from the Emerys and their "joint" campaign. Why? Because they're one-trick ponies on the single issue of marijuana, and regularly change political stables to further their cause without any loyalty whatsoever to either the party or its leader.

They've backed the Marijuana Party, the NDP and the Greens, but now it's the Liberals.

Libs were burned before

"I've never done it except with people I know and trust. And Marc Emery was someone I met but certainly not someone I ever thought of smoking with," Trudeau said in Aug. 2013. "I only met Marc Emery once in my life, so that's a lot of smoking with him that I apparently did."

Emery publicly apologized last year, but still claims he smoked up with Trudeau on one occasion. Trudeau continues to deny it.

In 2008, Emery reportedly claimed he struck a deal with the late New Democratic Party leader Jack Layton to bring Marijuana Party members and pro-pot supporters to the NDP and offer up candidates to help with an NDP promise to decriminalize the drug.

Then-Layton spokesman Brad Lavigne said: "The New Democratic Party has made no such deal with any other party or with any individual... This is nonsense, absolute nonsense."

Layton himself later denied the allegations. "There never was any kind of a deal. There was no commitment, no relationship," he said, while noting the party had favoured decriminalization for years and was asked about it in the 2004 and 2006 elections.

Emery's comments about Trudeau were nasty, since he denounced the MP for voting for Bill C-15, which would have imposed mandatory minimum sentences for drug offences, including marijuana.

Emery said in a 2009 video because Trudeau "smoked with me four or five times" that "it really pisses me off when I see Justin Trudeau, who took big gaggers with me, is in Parliament actually voting for Bill C-15. What a fucking hypocrite."

All of which makes one question Jodie Emery's candidacy, given Trudeau thinks her husband lied about him in a way that hurt Liberals.

Inconsistent, except on cannabis

What's more, Jodie is anything but consistent politically, other than campaigning for cannabis.

She twice ran for the Green Party provincially. In 2013 in Vancouver-West End, she placed third behind winner New Democrat MLA Spencer Chandra Herbert and BC Liberal Scott Harrison.

In 2009, she came in third in Vancouver-Fraserview, losing to BC Liberal Kash Heed in a contest where Elections BC later fined Heed's campaign $8,000 for overspending but did not order a byelection. Emery's 904 votes were greater than the margin New Democrat candidate Gabriel Yiu lost by to Heed.

While Marc Emery was indeed shafted when the federal Conservative government extradited him to a tough prison sentence in the U.S. rather than charge him in Canada, Emery knew all along he was poking a stick at a tiger and aiming for marijuana martyrdom.

Canadians would be outraged if the U.S. refused to extradite an American illegally mailing drugs or guns into our country. Emery, however, sees himself as a faultless hero.

"This is an epic struggle between good and evil. You couldn't pick a more virtuous person to go up against evil," Emery said of himself before being extradited.

Despite supporting the NDP, Greens and now Liberals at various points, Emery identifies most closely as a right-wing libertarian, not a social democrat.

"My mentor is Ayn Rand," he told The Georgia Straight in 2007, talking about the author of Atlas Shrugged and The Fountainhead.

The Emerys can make one claim that won't be disputed. Their efforts and those of thousands of others have begun a process of marijuana legalization in the United States, starting in Washington and Colorado States, and likely Canada in the future.

But their self-promotional and dubious approach isn't one any party should accept.