Justin Trudeau arrives today in Vancouver with some polls showing his Liberal Party in a dead heat nationally with the New Democrats -- and poised for a possible rebound in British Columbia where the party has been on life support since the last election with only two seats. 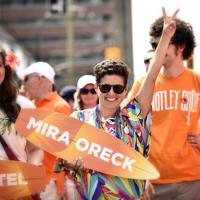 Tories in Trouble in Three BC Battlegrounds: Poll

The NDP and Conservatives are still likely to win the majority of the province's 42 seats, but the Liberals have enough momentum here that they could win up to six or eight seats in Metro Vancouver -- mostly seats they held when Paul Martin was Liberal prime minister.

B.C. has been viewed as a battleground between the NDP and the Conservatives. But the latest tracking polls from Nanos Research put the Liberals at 33 per cent, in second behind the front-running NDP at 36 per cent, and the troubled Tories at 18 per cent.

Still, the problem for the Liberals is that their vote isn't as "efficient" as the votes going to the New Democrats and Conservatives, said Innovative Research Group's Greg Lyle.

The pollster said that national surveys show that the Liberals have been gaining support in seats they are least likely to win, while not making significant gains in swing seats. "The problem the Liberals have is in getting their votes in the right places. And that's the big advantage that the Tories and the NDP have had so far, because their votes are more efficient than the Liberal votes.

"But if you go up enough, that ceases to be a problem."

Lyle said the Liberals still face an uphill struggle in B.C., but are doing far better than before the campaign. "They were looking vulnerable to the NDP and now they are not just looking less vulnerable, they are looking competitive."

The pollster said the recent Liberal ad campaign has been effective, attracting voters who were considering the New Democrats. But that dynamic could change in the coming few weeks as the NDP rolls out its advertising effort.

Insights West pollster Mario Canseco said that the Liberals remain strongest in the Lower Mainland. "I don't think they are expecting to do anything in the Okanagan, or in the North or on Vancouver Island. Their best chances are in the urban seats like North Vancouver, West Vancouver, Vancouver South and the two seats they have."

Canseco cautioned that national polls aren't necessarily a good predictor of the state of play in the regions because of the small samples. "So part of the gains for the Liberals in the polls in B.C. are from the urban areas where they definitely have a shot of winning seats."

Canseco said that the Liberals still finished in second or third place in B.C. in the '90s when the party was forming majority governments under Jean Chretien. "They are starting from a very low number in B.C. In the last election, they only got 13 per cent of the vote in B.C."

'We are feeling really positive'

For the record, the Liberals here are upbeat.

"We are feeling really positive. The trend nationally is in the right direction, and it is in B.C.," said Jonathan Wilkinson, the Liberal candidate in North Vancouver where a recent poll gave him a one-percentage point lead over Conservative incumbent Andrew Saxton.

Wilkinson and other Liberal insiders say that previous Conservative voters -- people on the centre-right -- have become disenchanted with Prime Minister Stephen Harper and are moving to the Liberals.

"We have seen quite a bit of softening of Conservative support at the doorstep," said Wilkinson. "These Tories fall into two categories: the Progressive Conservatives, or Red Tories, who have found themselves increasingly without a home in the party; and folks who have been part of the bedrock of the Harper support base but have been turned off by the Mike Duffy trial and other things."

The Liberals are expected to hold on to their two seats -- Vancouver Centre and Vancouver-Quadra -- and could regain North Vancouver, West Vancouver-Sunshine Coast-Sea-to-Sky and Vancouver South. Their party's new strength also gives them a shot at victory in Surrey Newton and Steveston-Richmond East, two other seats where Liberals were previously elected. Less probable, but not impossible, are Liberal wins in Vancouver Granville and Delta.

Mike Witherly, a Liberal spokesman in B.C., said voter fatigue with the nine-year-old Harper government is bringing about a "re-coalescing" of the Liberal political universe in southwest B.C. "It's a long-time to be in office," added Witherly, speaking about the Conservative decline.

The Liberal staffer said that a continued decline in the Conservative numbers could spook the "business type of voter" into moving to the Liberals. "These are people who will start thinking: 'Wow, do I really want a NDP government?'"

The New Democrats, not surprisingly, are downplaying the Liberal factor in B.C., arguing that in most of the province the NDP is viewed as the party of change. "There is a sense of populism in B.C. which means the province usually swings between us and the Conservatives," said NDP MP Nathan Cullen.

The Skeena MP said the Liberals are contenders in some three-way fights but will remain the third party in B.C. "The Liberals may have some concentration of voters in North Vancouver or in certain pockets. But if you look at the major regions, it's the NDP that is competitive in every single one."

Pollster Canseco said that NDP leader Thomas Mulcair has enjoyed a strong lead in polls on leadership in B.C. with Harper far in the rear. National polls in recent days have Trudeau's personal popularity steadily improving.

Too soon to write off

Veteran B.C. federal Liberal Mark Marissen believes Trudeau's improved standing will survive attacks in the remaining weeks. "Trudeau has been punched in the gut. There is almost nothing new to throw at him, and he is still standing."

Nationally, most pollsters give the NDP the edge in the race for seats. The Globe and Mail election tracker gives the New Democrats a 48 per cent chance to win the most seats, followed by the Conservatives at 39 per cent and the Liberals at 15 per cent. But the Liberal resurgence is remarkable for a group that was the third party in Parliament -- and which not too long ago was written off by many influential commentators.

Peter C. Newman wrote a book in 2011 called the When the Gods Changed: The Death of Liberal Canada, arguing that Liberals had become a "third wheel without a regional power base" and poor financial support. Globe and Mail columnist Jeffrey Simpson has similarly written about the collapse of the parts of the old Liberal coalitions, including francophone Quebec, francophone minorities in other parts of Canada and voters in industrial Ontario.

Liberal insider Marissen said rumours of the Liberals' demise have proven premature. "The word Liberal is not as bad to people as some people think. It's bad to a large number of people who aren't Liberal. But the brand is doing pretty fine across the country."

Marissen acknowledged that Liberals have struggled for love in B.C.

"I think it's because historically the federal Liberals have been too focused on central Canada because that is where the votes are," said Marissen.

"The Liberals were also in power for too long and they got out of touch with British Columbians. Paul Martin worked hard to change that, and I think he was quite successful or at least as much as he could be.

"But it's going to be tough for the Liberals in B.C., it always has been."