It is not a pretty place, but it was for a few shining weeks in the spring of 1989. 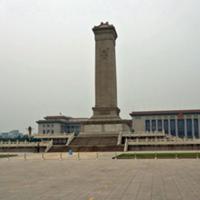 We watched it blossom daily from afar via the all-news stations on the televisions in our living rooms in Vancouver, and still relied on the morning and afternoon newspapers to hit our doorstep with a recap of what went on.

And then it came to an ugly, sorrowful end. It was June 3 here and June 4 there.

Tiananmen Square, the vast, flat cement, yet symbolic centre of China, was where students my age had peacefully gathered for several weeks to demand their government listen to them. The mid-April death of reform-minded former party secretary Hu Yaobang led to a declaration of a hunger strike on May 13, 1989. The democracy-desiring authors wrote it apparently with starvation in mind, not bullets.

"In these beautiful days of May, we are beginning a hunger strike. We are young, but we are ready to give up our lives. We cherish life: we do not want to die," it began.

"But this nation is in a critical state. It suffers from skyrocketing inflation, growing crime rates, official profiteering, and other forms of bureaucratic corruption, concentration of power in a few people's hands and the loss of a large number of intellectuals who would now rather stay overseas. At this life-and-death moment of the nation's fate, countrymen, please listen to us!"

There had been mass protests in Tiananmen Square in 1919 and 1976, but this one was different. The whole world was watching. Hundreds of thousands of sympathizers joined in. There were even reports of groups of low-level bureaucrats and military supply staff coming to march with banners in support. Protests spread to other cities, the international media descended on Beijing and the government was worried about more than losing face, but losing power. So it used all of its might to stop it.

Twenty-five years later, the world pauses, remembers and reflects. But the world is also now reliant on China, a country that is the planet's biggest factory and biggest market, for trade and investment, so leaders are careful not to criticize too much anymore. Chinese have been permitted by their government to become consumers and travel to other countries, but not citizens able to speak freely about the past.

Almost four years after Beijing was awarded the 2008 Summer Olympics, I made my first trip to Tiananmen Square with a tour group on a Saturday morning in May 2005. It was my first full day in Beijing and the first stop for the tour bus was outside the National Museum. I crossed the street and the moment I set foot on the square, the emotions overcame me. The physical evidence of June 4, 1989 was long gone, but the memories of watching it unfold on TV were fresh in my mind.

On this day, police vans circled in donuts for no apparent reason but to announce their presence. There were undercover cops throughout. Easy to spot. They worked alone, wore shiny shoes, well-ironed pants with shiny belt buckles, golf shirts and their mobile phones clipped to their belt buckles. One of them came from out of nowhere and approached me in the lineup to Mao's mausoleum. He shouted "no photos!" and pointed at the bulge in my pants pocket where my flip phone had been since I was on the bus. It was no secret that every square-inch of the square was under watch from security cameras on the lamp posts.

On the steps of the museum was the official Beijing 2008 Olympics countdown clock, unveiled the previous September. Toronto was the runner-up in 2001 when the International Olympic Committee chose the host. Some blamed it on Toronto Mayor Mel Lastman's asinine worry about being boiled by natives in Kenya, but the IOC really wanted to move into a new market to satisfy its global sponsors. Deng Xiaoping, who died in 1997, had both ordered the end of the Tiananmen protest and reforms to allow capitalism in the communist country. Still, there were many that wondered about the merits of inviting the youth of the world to compete in the city where youth of the host country were so violently silenced.

I returned in September 2006 for the Beijing Olympics' World Press Briefing, where the organizing committee gave reporters from around the world hardhat tours of venue construction sites and introductions to key executives. The countdown clock's digits had grown smaller and the margins of the square had been transformed. Giant versions of the five mascots were coupled with floral models of Chinese landmarks, even the Potala Palace. It was a not-so-subtle message to Tibetan independence advocates about who was boss in the disputed region. Decoration, not democracy, was the order of the day as the Games approached.

No moves on censorship

Looking back at newspaper reports from June 1989, the military had been flexing its muscles for several days. Soldiers had jogged by en masse and were driven through on trucks. They were even blocked by protesters and vehicles. But who predicted the iron fist reaction?

Martial law had been in effect since May 20, a week after the hunger strike began. Party secretary Zhao Ziyang, who had visited the protest and expressed sympathy for the students, was put under house arrest. Students went to the offices of the Beijing Daily newspaper building and burned copies of the state newspaper. Four-hundred students in Nanjing, inspired by the U.S. civil rights movement, began a 1,600-kilometre walk to Beijing. The protest swelled to an estimated 300,000 people.

In Vancouver, the Sun reported that Chinese consul general Duan Jin sent his assistant Li Xinmao to accept a 2,200 name petition from Chinese residents of Vancouver in support of the students. The newspaper included a terse quote from Li: "China wants stability. We hope the overseas Chinese will not support the movement in Tiananmen Square."

Wire service reports documented the mayhem that began in the wee hours of June 4. Broadcasters initially reported dozens were killed and hundreds were wounded. Armoured personnel carriers flattened tents. Citizens took out their frustration on soldiers, throwing pavement stones at them and stealing their weapons. One report said nine doctors at Tongren Hospital were shot and killed because they wanted to leave and organize a blood drive. Reports of the death toll ranged from 300 to 3,000 and there were even reports of rapid cremations to cover up the deaths.

It sparked protests in New York, San Francisco, L.A, Washington, D.C., Houston, Toronto and Vancouver, where the Chinese consulate near Granville and 16th drew hundreds of protesters. More than 200,000 marched in Hong Kong, where marches have been held annually.

The most-watched 109 acres in the world

During an April 2008, pre-Olympics visit, one of the highlights was a tour of the Beijing Police surveillance headquarters. Beijing Olympics organizers wanted to show foreign media more than the competition venues, like a weather office, food inspection centre and a new sewage treatment plant.

I was pleasantly surprised that they didn't ban me from using my video camera in the centre, which had screens of various sizes, showing the network of the city's surveillance cameras. There was a cluster showing feeds from the pan, tilt and zoom cameras inside Tiananmen Square. It is arguably the most-watched 109 acres in the world and nothing unusual would be tolerated by those monitoring it.

The B.C. government thought it had the best spot for Olympic hospitality, across the southern edge of the square, at the Beijing Planning Exhibition Hall. Attendance was much less than anticipated, as only 40,000 people visited over four and a half-month run.

Some of the reporters who were first to arrive for the Olympics in late July 2008 found out first hand, when they searched for information about the "three Ts": Tiananmen, Tibet and Taiwan. The IOC had to remind the Chinese government of its pledge not to censor the web for the visiting horde of foreign media. Since 1989, the Internet became the world's most-powerful medium, but China's government became the undisputed gold medallist at domestic censorship and the firewall returned to normal when the reporters went home. It may have gotten worse, as international human rights groups have many files on Chinese bloggers who have been jailed for expressing their opinions online.

Tiananmen Square was a magnet for Olympic visitors and it was even on the marathon route. On the eve of the closing ceremony, there was a surreal scene as I took one, last long walk across it. For as far as the eye could see, I was the only obvious foreigner in a place that draws its fair share of foreign tourists. There was an unusual amount of one-child families and they seemed to be choreographed, all walking the same speed. The police vehicles were there, as always. One cop nonchalantly smoked a cigarette with the window on the car rolled down near the Monument to the People's Heroes, where the government's red banners proclaimed in white characters messages about opening up, reform and harmony -- three things the students wanted in 1989.

I remembered back, not to the first time I visited, but the second time. It was at night, after the square had closed, to take photos of the gate to the Forbidden City, with its portrait of Mao staring south. A man, perhaps in his mid-50s, hawking postcards came along.

"Bu-yao," I said, meaning "don't want." I added a "xi-xi" as a polite "thank-you." He laughed, repeated "bu yao!" and struck up a conversation with my Mandarin-speaking friend, who told him we're from Canada.

The postcard seller, his back to Tiananmen Square, asked whether "in the West, do you trust your politicians?"

He replied: "We don't either. Not all Chinese are alike."