BEIJING -- In the 25 years since tanks rumbled across Tiananmen Square and brutally put paid to mass expressions of discontent here, the Chinese capital has been transformed. With a tip of the hat to Milan Kundera, one might think of Beijing these days as the city of spending and forgetting. 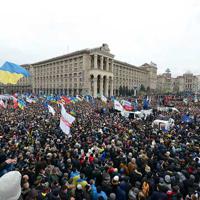 'Dromocracy' Now: When the Streets Take Over

"Beijing differs vastly from what it was in 1989," reports The Wall Street Journal. "Where bicycles once dominated the city, luxury cars now clog its roadways. Well-heeled residents dress in international designer brands and the city has become a major destination for global commerce despite a slowing Chinese economy."

Visiting the city on the weekend, I saw shopping districts and markets chock-full of spenders and forgetters. Tiananmen Square, by contrast, drew scant crowds. For locals, there was discouragement in the form of tight security to get onto the square. (To foreigners, less attention was paid, although I did draw an admonishing shout from an undercover security guard when I photographed military recruits on the march.) The weather probably didn't help either: 34 degrees Celsius, a pollution reading of 190 PM2.5 which the U.S. Embassy lists as "unhealthy," and smog so thick the city looked like it was beset by a dust storm.

The guards and identity checks at the square were among a variety of security clamp-downs in the capital during the run-up to the Tiananmen uprising's silver anniversary, and fit with the "overall tighter grip the Communist Party has tried to place on society, officials, the Internet and other areas since Xi Jinping ascended to the No. 1 leadership post 18 months ago," according to the WSJ.

Need they bother? Reportedly, a new generation of consumers knows little and cares less about what happened here a quarter century ago. China continues on what President Xi, in remarks summarized last week by the state news agency Xinhua, calls "the socialist path with Chinese characteristics," although on the evidence here it seems the lines are blurring between socialist societies and capitalist ones.

China exudes an economic confidence that is in stark contrast to doubts expressed not just by Thomas Piketty, whose Capitalism in the Twenty-First Century seems to have everyone in Europe rattled, but even by such pillars of Western capitalism as the Bank of England. About the same time Xi was extolling the virtues of the "great motherland" here, bankers and CEOs at a conference on "Inclusive Capitalism" in London heard Bank of England governor Mark Carney utter the following: "Just as any revolution eats its children, unchecked market fundamentalism can devour the social capital essential for the long-term dynamism of capitalism itself. Prosperity requires not just investment in economic capital, but investment in social capital."

So capitalism is eating its young, while socialism exhibits its "Chinese characteristics" through designer brands and the ample, sclerotic evidence on Beijing's ring roads that China is now the world's largest car market, and growing. (At fewer than 74 cars per thousand inhabitants, there is a lot more clogging of roadways in China's future when you consider that in the United States there are 742, or 10 times as many automobiles per thousand residents as in China.) Luxury car manufacturers are targeting China just as population controls are being eased and two million more births per year are expected to augment China's already astonishing birth rates.

As unstoppable as China's rise appears, it has to be weighed not only against the state's enforcement of a collective amnesia about what happened here 25 years ago, but against the dire sacrifices being demanded of the environment -- globally, in countries like Canada and Australia that are addicted to Chinese demand for raw resources like coal and oil and gas, and locally by Chinese citizens who make their way to work each day through the fog of our war on the environment. 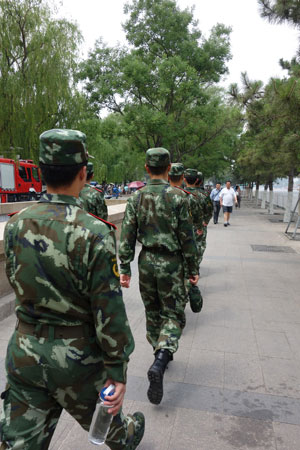 Soldiers tasked with keeping order in the Square did not willingly participate in tourist photo-ops. Photo by Ian Gill.

It's hard not to think we are at a curious time in world history. Where once the world's superpowers stood toe-to-toe in a military and ideological standoff during the so-called Cold War, we now see a merger of convenience of ideological and economic interests in what might best be thought of as this century's Warm War.

Of course, the threat of large scale military adventures will never go away, and indeed will be exacerbated by the hunger for energy resources (see Ukraine for the latest strain). But these days, a country like Canada -- militarily irrelevant but a global energy power -- is as complicit in the Warm War as any Eastern Bloc satellite that manned the barricades and armed the warheads of yore. But in our case, we export what Desmond Tutu calls our "filth" from the tar sands, we import products we mostly don't need from the buyer of our planet-warming fossil fuels, and leave behind fumes that are rapidly heating the planet and choking its citizens, here more than anywhere.

The fact that cities like Beijing and Shanghai suffer from horrendous air pollution is hardly news, although what is news is evidence that the air in China has been found to contain 10 to 20 times more fine metallic particles than that of the United States. Among them, according to the South China Morning Post, are concentrations of zinc, chromium, iron, copper, magnesium, lithium, nickel, cobalt, arsenic and selenium that are creating what one scientists calls "the most sophisticated forms of air pollutants in history," pollutants that are capable of altering human DNA, and not for the better.

"All the news these days is environmental," one long-time Shanghai resident tells me. In Beijing, a young guide talks of his generation's muted antipathy towards the government, in part because they don't trust the Communist party when it comes to the environment. And why should they? Everywhere in the cities resounds the clatter and clang of progress. Between the cities, as seen from the bullet train between Shanghai and Beijing, there is little sign of relief on a landscape festooned with electricity towers, stretching between clumps of apartment towers reaching up into the gloom, at their feet shallow waterways green with algae. A land turning sour at the hands of man.

How does it turn out? Who knows. It might well be that lifting the Chinese out of rural poverty into an urban middle class will turn out to have been the easy part. The hard part will be keeping them there, or keeping them down when they discover the true cost of their ascension to the middle of nowhere. At that point, we might look back at what happened in Tiananmen Square in 1989 as a prelude to the real revolution that threatens China, and the world, as no other in history. The Warm War portends a meltdown. China is at its vanguard.