"A good leader needs to have a compass in his head and a bar of steel in his heart." -- Author Robert Townsend 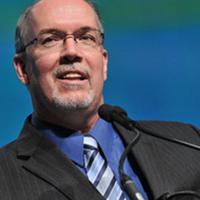 What to Make of the BC NDP's One-Horse Race?

On Thursday at 5:01 p.m., John Horgan is likely to be declared the next leader of British Columbia's New Democratic Party, and will launch his drive to become the province's next premier in the May 2017 election.

But the three years in between will determine if Horgan has the right stuff to end the NDP's string of four consecutive election losses in a row, and lead a party that has been shut out in all but three of the elections it has ever contested.

That's a tough test, but I believe Horgan is absolutely the best person to challenge BC Liberal Premier Christy Clark and win.

It's why I sent Horgan, whom I've known for 22 years, a personal and private email in February strongly encouraging him to reconsider his decision to drop-out of the NDP leadership race in October 2013 and re-enter the contest to replace Adrian Dix.

I was not alone, and Horgan only came back when a wide range of people persuaded him.

After MLA Mike Farnworth, the only other declared contender, gracefully bowed out of his own run in favour of Horgan, the NDP leadership was effectively decided.

The nomination deadline ends Thursday at 5 p.m., and with a $25,000 non-refundable entry fee, Horgan should be the only candidate.

But can Horgan succeed in the much more difficult task of uniting the party, finding policies with public appeal, encouraging new voters and beating the formidable campaigner Clark?

I'm betting on it for three good reasons.

One: Horgan has a winning personality, charisma and charm.

He is a natural, energetic campaigner who genuinely enjoys meeting people, talking politics and getting his message out.

Two: Horgan has a realistic perspective on where British Columbia needs to go, in our economy and society.

An MLA since 2005 and through his work as chief-of-staff to former NDP premier and cabinet minister Dan Miller, Horgan understands that B.C.'s success is based on resource extraction and exports as well as tourism and high-tech industries.

The delicate balance the NDP needs between jobs and the environment is essential to its success in 2017.

Three: Good will. NDP morale was crushed in the 2013 election, when apparently sure victory turned into bitter defeat through a failed campaign that squandered a substantial lead in the polls.

While some media observers claim an NDP "coronation" with no battle for leader is bad for the party, the successful examples of Dave Barrett and Mike Harcourt as the party's first and second elected premiers -- nominated unopposed as opposition leaders -- shows otherwise. A united, focused party can win.

The NDP can now avoid spending money, resources and energy in a divisive fight between opponents who hail from the same family.

Farnworth's impressive decision to spare the party a battle means the NDP has nearly half a year extra to focus on winning in 2017.

With potential candidates like Vancouver-Point Grey MLA David Eby previously bowing out to start a family this year and MP Nathan Cullen deciding to stay in Ottawa for the 2015 federal election battle against Stephen Harper's Conservatives, the acrimony all leadership fights bring is missing.

Mad as hell at BC Libs

Pundits who claim the BC NDP leadership wasn't worth fighting over completely neglect the fact that the party is within striking range of winning majority government, needing to turn over just nine seats.

It may well be that by the end of 2014, B.C. New Democrats are in the best position of any provincial sister party, with Canada's only NDP government in Manitoba at severe risk of defeat, Ontario's NDP running third, Nova Scotia's NDP devastated by the bitter defeat of its one-term only government under ex-premier Darrell Dexter in 2013, and Saskatchewan's NDP out of power since 2007.

Could anything go wrong? Of course! It's happened too many times before. But some of the criticism of the BC NDP is baseless or exaggerated.

Those who say the NDP should have a younger leader forget that at 54, Horgan is far younger than ex-premier Gordon Campbell, who was 63 when he retired after 10 years in office, and is just six years older than Clark.

Horgan's shrewd recruitment of MLAs Eby, 37, and Michelle Mungall, 36, as campaign co-chairs shows an appreciation for youth in the NDP.

Others question Horgan's temperament, and I did that myself back in 2007.

But I like that Horgan is passionate, and at times fiery, in his anger at what the BC Liberals have done in office.

The BC NDP needs a leader who is outraged at the disastrous way the Ministry of Children and Family Development abandons our most needy and vulnerable, who is furious that Clark's B.C. Jobs Plan is an empty shell filled with expensive, taxpayer-funded advertising, who is mad as hell that the B.C. legislature sat for just 36 days last year and went 200 days without a session.

Horgan will find a ready audience with British Columbians who share his anger at government ineptness and inaction.

The BC NDP caucus is full of MLAs who can make trouble for the BC Liberals -- maybe one reason the legislature rarely sits, and also at times for their own leader.

But Horgan's emergence as the consensus, unchallenged leadership candidate gives him significant clout in the caucus room, and NDP MLAs who want to be in government at last will have good reason to strongly back their new leader.

Horgan has the skills, abilities and now opportunity to become premier of British Columbia. It will be up to him and the BC NDP to achieve what has been a tantalizingly close but elusive victory.