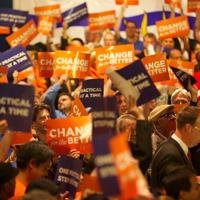 BC NDP, Fight those Wavering Spirits

Don't be deceived by public indications, because a fierce war is already being fought for the B.C. New Democratic Party leadership.

But this is a battle being fought by shadow warriors -- until they choose the right time to step into the light.

When the B.C. Legislature resumes sitting today after an inexcusable absence of 200 days, attention will naturally focus on the BC Liberal government's throne speech, its stated agenda for new policies.

And while the traditional jousting between Opposition and government will dominate proceedings, simultaneously behind the scenes NDP MLAs will be involved in another, internal fight to determine who will next lead the party into the 2017 election after Adrian Dix steps down.

To date the only leadership announcements have been to say "No, thanks": MLAs John Horgan, Judy Darcy, George Heyman; Members of Parliament Nathan Cullen, Peter Julian, Fin Donnelly, Jinny Sims and Kennedy Stewart; and Vancouver Mayor Gregor Robertson and city councillor Geoff Meggs have all declined the chance to succeed Dix.

But even this list of non-combatants is deceiving, for serious efforts are underway by party and labour activists to convince Horgan -- the fiery veteran who placed third in 2011's leadership vote -- to reconsider and run again.

Meanwhile, shadow campaign teams are actively soliciting support from MLAs, unions and key individuals who can provide the votes and money needed to win the one-member, one-vote contest that concludes in September.

Who hasn't said no

Veteran MLA Mike Farnworth, a former cabinet minister under NDP premiers Mike Harcourt and Glen Clark in the 1990s, is generally seen as the frontrunner after placing second to Dix last time.

Many of Farnworth's past backers are actively seeking support again now and believe he could have won the failed 2013 campaign against Premier Christy Clark.

But others, including Horgan himself when he announced he would not run last October, feel that it's time for new blood in leadership to face the future.

"I was hearing an inevitability about it. I felt it was best to get out of the way for our younger members. It will open up the party to new ideas. It was imperative I made this announcement to clear the field," Horgan told media then.

But late Sunday it appeared Horgan was indeed reconsidering. In an interview with CKNW AM 980 Radio's Shane Woodford, Horgan said: "I am candidly a bit disappointed. I was hopeful that we would have seen some of the younger people step up but I also understand, having been a leadership candidate, how absolutely daunting it is. It is a difficult task criss crossing the province particularly just so closely after a defeat."

And Horgan admitted he was being courted to run again.

Notwithstanding Horgan's second thoughts on a leadership bid, members holding his original view that it's time for a changing of the NDP guard are coalescing around new MLA David Eby, who became a giant killer by defeating Clark in her own Vancouver-Point Grey riding and entered electoral politics with a significant reputation as executive director of the BC Civil Liberties Association and lawyer for Pivot Legal Society representing marginalized people in the city's Downtown Eastside.

"He's a grandstander," Zubyk told The Province's Michael Smyth. "There are lots of people working quietly every day to help the homeless, but David Eby goes the YouTube route. He wants attention."

Those backing Eby are convinced a pre-emptive strike by Zubyk, who executed ex-corporate CEO Jim Shepard's $1-million pre-election advertising smear campaign against Dix, is a clear indication Eby is most feared by Clark and her strategists.

But other New Democrats are unconvinced either Farnworth or Eby are the right choice, so they are now heavily pressuring Horgan to re-join the battle, despite his October statement that it is time for new ideas and people.

They believe only Horgan can find a balance between the two solitudes that often plague the NDP -- the classic "brown" versus "green", or jobs versus the environment conundrum that bedevilled Dix after a mid-campaign announcement reversing his neutral position on the proposed Kinder Morgan pipeline by saying he now opposed it as well as the Enbridge Northern Gateway pipeline plan.

That surprise decision appeared to be the turning point in the election, letting a hard-hat wearing Clark to triumph against overwhelming odds by making the ballot question who would best lead on jobs and the economy.

Dix's position played well in Vancouver and Victoria, but was devastating amongst blue-collar workers in key swing ridings like Kamloops and other Interior and northern seats.

Horgan is seen by several union leaders and former NDP premier Dan Miller, who Horgan served as chief of staff, as the only potential leader who could avoid a repeat defeat on the same issue.

"I think he'd be the perfect guy," Miller told host Vaughn Palmer of Shaw TV's Voice of B.C. on Jan. 30. "He looks good. He's a stand-up guy. He looks you in the eye. He's a straight shooter." It all sets the stage not for a "lacklustre" contest, as some have predicted, but a hearts and minds battle that may determine the party's path for years.

Regardless of whether Horgan reverses course and enters the race or whether Farnworth and Eby ultimately decide to run, the reasons for likely candidates not announcing for leader are many and strong.

Starting a campaign without committed support can lead to major public embarrassment when key endorsements go to other candidates.

BC Liberal Finance Minister Mike de Jong was seen as a heavyweight in the party but couldn't convince a single MLA to support his cause.

Fundraising, especially after a massive party effort that raised record donations in 2013, will be difficult -- and half of every dollar given to a leadership candidate goes to the NDP provincial office.

And the successful candidate needs more than just member votes -- they require high profile endorsements, and must be able to herd cats in the NDP caucus, deal with the prickly press gallery, navigate tricky party politics around potential pipelines, liquefied natural gas, fracking and the possible Site C dam, plus develop a very thick skin to shield from both external and internal attacks.

Despite his campaign crash, Dix -- who I endorsed in 2011 -- set the bar high by calming a caucus openly at war that forced leader Carole James' departure; launching endless and successful fundraising efforts, especially in the business community; breaking major news regularly; demonstrating an exhaustive grasp of a wide range of issues; and driving BC Liberal support and Christy Clark's approval rating into what seemed a bottomless ditch.

Plus, whomever wins the NDP leadership will face incredible expectations of victory from a party that feels it was robbed of government by an amazingly poor campaign and will have been out of office for 16 years by the 2017 election.

Daunting prospects for any potential candidate, but if the risks are high, the reward is too: by reversing the results in just nine seats, the next NDP leader can become premier.

And that's enough incentive for warriors to step out of the shadows and into a party battle.