[Editor's note: Leading up to the provincial election in May, Seth Klein and his colleagues at the Canadian Centre for Policy Alternatives are posting analysis on The Tyee regularly. This is his second piece, co-written with Adrienne Montani, provincial coordinator of First Call: BC Child and Youth Advocacy Coalition.]

On Feb. 11, British Columbians will enjoy a well deserved new stat holiday. With the inaugural Family Day, Premier Christy Clark has made good on a promise made during her bid for the BC Liberal leadership. The winter stretch needed a new long weekend, and many will appreciate this newfound time with family and friends. 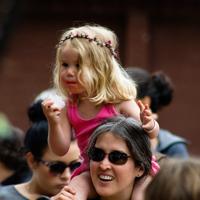 What Would BC's Parties Do for Kids?

But what of other promises made as part of the premier's "Families First" agenda? And what other policy initiatives are needed to truly make life a little easier for B.C. families? The government claims its families first agenda is "focused on keeping family life affordable" and "supporting vulnerable families," but does it really live up to its claims?

Clark did make good on one promise early in her mandate, when she eliminated the $6 "training" wage and increased the minimum wage to $10.25 an hour. Until recently, about 13 percent of British Columbians, many of them parents, earned less than $10 an hour, so the minimum wage hike provided a solid benefit to thousands of low-wage workers (although a new lower wage for those who serve alcohol will leave some behind, as in plenty of drinking establishments tips will not make up the difference).

What's needed is a clear rationale for setting the minimum wage. The minimum wage should be linked to the poverty line, and then indexed to inflation, so that employers can plan for predictable increases, our lowest paid workers won't lose buying power, and we can stop having this debate every few years.

Another early plank in the premier's proposed Families First agenda was a promise to increase the Working Income Tax Benefit. But we've heard nothing on that front for the past two years; the idea seems to have evaporated.

What else should rightly constitute core elements of a "families first" agenda? We offered up a list of recommendations two years ago, and continue to urge the following:

• First and foremost, recognize the toxic role poverty plays in undermining healthy childhood development, and adopt a comprehensive poverty reduction plan with legislated targets and timelines, as outlined by the BC Poverty Reduction Coalition. Thus far, the B.C. government refuses to commit to such a plan (one of only two provinces to stubbornly hold out). Instead, the government has announced community "Poverty Reduction Strategies" in seven pilot communities. But with no new resources or programs or targets, these initiatives are unlikely to lower poverty rates locally, let alone provincially. It is the province itself that has the capacity to meaningfully reduce poverty. According to a recent poll commissioned by the BC Healthy Living Alliance, 78 per cent of British Columbians think it is important for political leaders in B.C. to address poverty with a provincial poverty reduction plan with clear targets and timelines. Clearly, the public is ready for political leadership on this issue.

• Create a provincial non-profit child care system that offers high quality, affordable and accessible care for all families. This is a vital employment support for parents, and necessary to enhance child development opportunities for all children. Currently, parents pay punishingly high and escalating fees, there are too few spaces, and early childhood educators are underpaid. There is a growing chorus calling for a $10/day plan, and much work has gone into how such a plan should be structured. This policy would be a game-changer for thousands of young families; it is likely the single most significant thing the government could do to relieve families of a key affordability challenge.

• Reform B.C.'s income assistance policies. The welfare rates of $610 for a single person and $906 for a person with a disability are far too low and have not been raised since 2007. It is time to increase inadequate shelter and support rates, index them to inflation, and restore child support exemptions. Revise the rates for parents/grandparents raising children with disabilities to better reflect their extra needs. Thankfully, the government did recently restore earnings exemptions for everyone on social assistance, and improved the rules for adults with a recognized disability. But families and individuals on income assistance remain far below the poverty line.

• Increase government's efforts to end homelessness, and increase the availability of safe and affordable housing for low-income families. As a province, we used to bring on-stream 2,000 new units of social housing a year (and in truth, much more is needed today). But the province has only increased the net new supply of social housing by about 2,700 units total over the past seven years (or less than 400 units per year). And at present, there are no new plans to build social housing once the current promised units are completed. If that does not change, the homelessness crisis will be back at peak levels in a few short years.

• Encourage employers in both the public and private sectors to pay the Living Family Wage, that is, wages that provide a basic level of economic security (calculated annually by our organizations, and currently $19.14 in Metro Vancouver). No parent should be required to work so many hours that he or she is deprived of time for parenting, but that is what happens when wages are so low that parents must work multiple jobs just to make ends meet.

• Many important government subsidies and benefits have income thresholds that are too low, and are clawed-back so quickly that modest income families face some of the highest marginal tax rates in the province. For example, many modest-income families (despite struggling with a bare-bones budget), do not qualify for the low-income carbon tax credit, the sales tax credit, the Rental Assistance Program, MSP premium assistance, or provincial child care subsidies. This can be rectified with smart fiscal policy. Rather then wasting precious public resources on expensive tax cuts (that benefit the rich as well as the poor), focus efforts on those families struggling to make ends meet.

• Work with the federal government to achieve enhanced parental leave benefits through the Employment Insurance system. If EI parental benefits were extended to 18 months and all parents were eligible, as proposed by the Human Early Learning Partnership at UBC, it would make a huge difference to young families.

• Ensure B.C.'s public schools have sufficient funding to deliver on their promise of equitable opportunity for all children, regardless of ability or income level. Necessary supports for children with special needs should not be so scarce, and now a Supreme Court decision in the Moore case should compel action in this regard.

• Ensure the Ministry of Children and Family Development has sufficient funding to carry out its child protection mandate with integrity, based on high standards of practice. Improve supports for youth in care as they transition to adulthood.

• After B.C.'s work-start age was lowered to 12 years old, work-related injury claims for 12 to 14-year-old children increased 10-fold. Children in poorer families often face extra pressure to contribute to family income, making them extremely vulnerable to exploitation by unscrupulous employers. Raise the work-start age in B.C. back up to 15 and strengthen protections for young people at work.

With respect to "affordability," the B.C. government likes to boast about how low provincial income taxes are, and notes that thousands pay no income tax at all (because their incomes are so low). But other taxes and user fees have gone up substantially. Most notably, MSP premiums have gone up by 85 per cent since 2000 (with the latest four per cent increase kicking in last month). A middle-income household with two earners making $60,000 combined now pays more in MSP premiums than it does in provincial income tax, and the province now raises more income from MSP premiums than from corporate income tax. The province now derives as much income from sales taxes as from progressive income taxes. Increases in Hydro rates and post-secondary tuition also disproportionately impact lower-income families. And the province's reliance on gaming income (a regressive tax on the poor) has also increased dramatically.

Overall, as outlined in a recent CCPA report on taxes, the province's revenues have seen three notable shifts: from corporations to families; from upper-income families to middle and modest-income ones; and from progressive income taxes to regressive taxes and user fees. As a result, British Columbians now pay more out-of-pocket for a host of programs, through school fundraisers, post-secondary tuition, seniors care fees and more. Tax cuts, which have disproportionately benefited the wealthy, have decreased the province's revenues by $3.4 billion a year -- money that could be available to spend on needed public services such as those outlined above.

Of course families are not only those with children, and as the official government Families First agenda itself rightly notes, many do not fit the stereotypical mould of the nuclear family. A true families agenda must also seek to improve the conditions of low-income households without kids, and of seniors. As the 100 profiles contained on the website BC's Hardest Working so aptly convey, those struggling to make ends meet in B.C. are wonderfully varied. And whether their income is derived mainly from social assistance or low-wage work, all need public policy to ease their lives.

So as we enjoy some family time this coming Monday, let us also recommit to an ambitious plan to eliminate poverty in B.C., and make sure the needed services and supports for all types of families are in place.