[Editor's note: An annual tradition! The Tyee's latest roster of Big Ideas, our annual series highlighting creative ideas for improving our lives and communities, launches today. We'll publish a new idea for 2012 each weekday until Dec. 30.]

The coming year will see the world continuing to grapple with an increasing global currency crisis. Most modern forms of money are backed by nothing more than waning public confidence, and the symptoms of this deteriorating situation are splashed on the front pages of the world's newspapers almost every day. 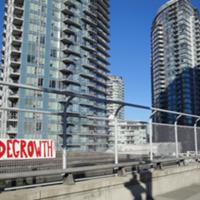 Do Less with Less, and Love It

These worries are in many ways well founded. The money in your wallet or bank account is progressively devalued every time a government cranks up the printing press, such as the recent rounds of quantitative easing in the United States. As the European monetary union lurches towards disintegration, and the U.S. demonstrates almost daily their political inability to deal with their ballooning debt crisis -- where is a safe place to keep your wealth in 2012 and beyond?

Many have turned to gold, a rare and otherwise useless metal that is valuable in the same way that Paris Hilton is famous -- only because we believe it to be true. Many gold hoarders are pining for the day when paper currencies collapse and their investments will hit thousands of dollars an ounce. Being lucky enough to live in a generation that has so far avoided significant societal turmoil, one might wonder why anyone would wish for such a thing. And while ballooning gold prices might yield short-term profits for the few who hope for the worst, it would also usher in an environmental disaster.

Gold extraction is one of the most destructive and wasteful mining processes in the world. With current prices over $1,500 an ounce, it is now profitable to mine ore with less than one half of a gram of gold per tonne -- meaning that 70 tonnes of polluting waste rock need to be crushed and processed to wring out a single ounce of gold. Things like clean water that actually have value are despoiled on an enormous scale to extract something that has no intrinsic value at all. Gold mining is perhaps the most poignant example of the yawning disconnect between conventional economic theory and the natural world that sustains us.

Imagine instead if some future currency was not pegged to mere expectations, or to arbitrary and polluting metals like gold and silver. What if money was instead backed by a basket of indicators like arable land and potable water? Such things not only have intrinsic value now, their value is expected to increase in the future.

In fact, this process is already happening. Institutional investors are rapidly scaling up speculation in the world's arable farmland. A recent survey by the OECD found that private investment in farmland in 2010 was approaching $25 billion, and most observers believe this will double or triple in coming years.

The Knight Frank International Farmland Index is another industry newsletter promoting investment on the world's remaining food growing areas. Their most recent publication showed that in contrast to slumping U.S. real estate values, American farmland prices increased by 10 per cent in 2010. Brazil's farmland increased by twice that amount. It seems the financiers of the world have finally realized the old adage that "you can't eat money."

While such speculation might be seen as harbinger of the financial End Times, it may also indicate an alternative to increasingly unstable financial systems that remain completely divorced from the living world. Current economic theory is not merely blind to the environmental underpinnings of the food we eat, the water we drink and the air we breathe -- it actually encourages their degradation.

Obviously any move towards linking currency to natural capital needs to proceed with great caution. Merely privatizing the world's natural resources usually leads to their rapid exploitation, not to environmental stewardship. Financial speculation in arable land in places like Brazil at the expense of tropical rainforests is an ongoing and tragic example.

But ignoring the global financial system when considering environmental protection hasn't worked either. Virtually every environmental indicator from global fish stocks to soil erosion to climate change has steadily worsened in spite of mounting knowledge that proceeding further down this path is a very bad idea.

The ongoing currency crisis presents an opportunity for a fundamental rethinking of the concept of money. The economy requires solid assets to backstop currency values. Our environment needs market incentives that will drive natural stewardship -- not externalize it. How to reconcile these urgent imperatives is a discussion worth starting as we move into 2012.