This is going to sound ridiculous. But "irony" is dead, at least in its latest incarnation. 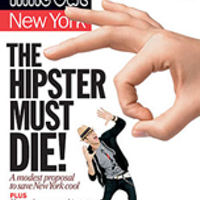 Need convincing? Start by YouTubing "Sexy and I Know It," the most recent mega-hit from LMFAO, a self-described "party-rock" duo whose name is chatroom code for "laughing my fucking ass off."

It wasn't so long ago that this type of full-frontal irony thrived mostly on the cultural margins. Consider the following description from an Adbusters Magazine polemic against Vancouver's hipster community, published in 2008: "The dance floor at a hipster party looks like it should be surrounded by quotation marks... The hipster has more of a joke dance. A faux shrug shuffle that mocks the very idea of dancing." Things sure have changed in three short years. Once the defence mechanism of fashion-conscious 20-somethings, ironic detachment now rules popular culture. But there's evidence it won't stay supreme for long.

Here's a revealing piece of LMFAO trivia: the group is signed to Interscope, the same record label that put out six Limp Bizkit albums. Recall that in a not-too-distant past, the impotent white-boy rage channeled by Limp Bizkit's "rapper" frontman, Fred Durst, and others, virtually dominated popular music. And that the grim climax of this so-called "nu-metal" movement came during Woodstock 1999, when shirtless thugs gang-raped female fans and set bonfires in the moshpit. Clearly, something had to change.

A cultural revolution, in fact, was fomenting that same year on Manhattan's lower east side. That was when the first American Apparel opened for business, Vice Magazine moved its headquarters from Montreal to New York, and groups of hip, trucker-hat wearing New Yorkers began to self-consciously mock, and glorify, America's white lower classes. With their university educations and global outlook, these proto-hipsters embodied a kaleidoscope of cultural influences, the very opposite of nu-metal's single-minded rage. It would take several years for the "hipster" aesthetic and lifestyle to spread across North America. But the movement's overarching message of ironic detachment had no trouble finding an audience. It was, after all, the era of 9/11, Homeland Security and an unpopular Iraq war sold to the public with lies and deception.

The creation of YouTube in 2005 was a crucial factor in hipsterdom's leap to the mainstream. Anyone with an Internet connection could stream global culture in minute-long fragments. This was ironic detachment writ large, the ability to select and assemble your identity from literally a planet's worth of influences. Is it any wonder that the schizophrenic musical mashups of Girl Talk and others reigned over the late 2000s? Or that a series of insanely popular Old Spice deodorant ads in 2010 gleefully declared war on continuity and narrative?

Which all brings us back to the present moment, and to LMFAO -- pop culture's latest lesson in irony. It's tempting to think we'll be stuck with quotation mark dance sequences (and much, much worse) forever. But just as the trucker hats of a new cultural order were visible beyond Woodstock 99's flames, so too with "Sexy and I Know It." Picture a certain rainy Vancouver night last January. The scene was a packed and steamy art gallery on East Hastings. On the makeshift stage, a six-foot Chinese rocker clutched his electric guitar and delivered the following un-ironic message to a crowd of 20-somethings: "Follow your dreams!" Only a month later, Egypt's youth ousted their president. And in the fall, Occupiers set up camp in every major North American city. Most are now being evicted. But their sincerity has already taken hold.