A post-secondary education has become a very expensive necessity. Average Canadian tuition costs have risen by 17 per cent since 2008, and students have found it increasingly hard to get through without going deeply into debt. Over half of Canadian graduates have had to borrow for their education and many have emerged owing between $20,000 and $25,000. 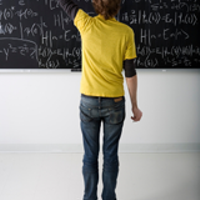 After Meltdown, Back to School?

The Canadian Federation of Students estimates that debt owed for Canada Student Loans now totals over $14 billion -- almost $2 billion more than in 2007. And that doesn't include provincial and private student loans.

But today's students don't see much choice. With only high school, menial jobs are the best available. According to StatsCan, in 2005 a B.C. worker with a certificate or diploma below bachelor level earned an average of $34,519. With a bachelor's, the average was $46,361. And with an advanced degree, the average worker earned $60,239.

Worse yet, many students must drop out before graduating -- they may run up sizable debts, but with just a year or two of post-secondary they have little chance of paying down that debt. Ironically, the sheer size of their debts may frighten them back to the workplace rather than go deeper in the hole.

College and university faculty are keenly aware that many "full-time" students are also working at least part-time. However admirable their determination may be, such students are too exhausted and distracted to do their best work.

Not always ready for post-secondary

Faculty also know that many students (especially young men) leave high school before they've really grown up. Faced with more freedom than they can handle, and lacking discipline and time-management skills, they party too much and study too little. They flunk themselves out, or at best underperform.

This is nothing new. But 40 years ago a college dropout could still find a reasonable job (the RCMP required only Grade 10). Today, even a B.A. must often settle for an "internship" before landing a real job.

As an undergraduate in the U.S. half a century ago, I saw plenty of bright young men (and a few young women) fall behind or drop out due to sheer immaturity, despite grades that had got them into Ivy League schools. And I also saw a few students who handled post-secondary with enviable ease: they had started in their early 20s, after a hitch in military service.

A few years later, in the army, I began to wish I'd done the same. I was finally growing up. I was also sharing a barracks with younger guys who'd enlisted right out of high school; they were already far more mature than I'd been at their age. However demanding military life may be, it offers plenty of time to reflect on what you'd rather be doing with your life. Those who returned to civilian life had far more motivation to succeed in post-secondary than I'd ever had.

Perhaps Canada should consider something that would give young people a similar chance to mature before tackling post-secondary. It needn't be military service (though it might be). It would offer high-school graduates a chance to get out into the world, to earn some money, and to grow up.

Suppose we created a "Canadian Service Corps." It would offer some kind of paid work for any high-school grad who applied, preferably in the grad's own community. Whatever the job, it would include some training in life skills like living on a budget, eating properly and keeping fit. CSC recruits would work in community centres, in municipal and provincial governments, or with cooperating private firms.

Pay would be minimal -- maybe $10 an hour, for a gross income of $20,000 a year. Few jobs, however useful, would be thrilling. But for every hour worked, the recruit would also earn $10 toward some kind of post-secondary education. That money would stay in a secure savings account until the recruit was ready to enroll.

The CSC recruit would sign a contract guaranteeing at least six months' full-time service. Resigning before the end of the contract would mean forfeiting one's education savings fund. Two years in the CSC would mean $40,000 to be applied to costs of tuition, books, lodging, and so on. (StatsCan says the average Canadian post-secondary tuition in 2011-2012 is $5,366.)

For anyone wanting to go into trades training, the CSC might offer a $5,000 bonus; we're going to need a lot of young plumbers, electricians, and heavy-equipment mechanics.

The CSC would transfer the money directly to the chosen school, as required. If the student decided to change schools or programs, the remaining money would be allocated accordingly.

Now 19 or 20, students would have some useful experience to bring to post-secondary. Much of their course content would make more sense than it would have right out of high school. They would be better managers of their time and money. They would know that if they flunked out, any money left in their savings funds would evaporate. (If an emergency required a temporary withdrawal from classes, the money would remain for the student's return.)

CSC veterans would of course be eligible for scholarships and bursaries like everyone else, and their coursework would likely earn them such additional support. Faculty would be ecstatic to have such mature, focused students in their classes.

The prospect of working for the Canada Service Corps would have some notable effects. Because it would recruit only high-school grads, potential dropouts would have a real incentive to stay in school. Once on the job, every hour missed would be costly both in lost wages and in a smaller post-secondary fund.

CSC workers would meet other people their own age in a disciplined workplace, and would learn to deal with other members of the community. They would enjoy the satisfaction of doing useful service while gaining respect for their work and their long-term plans. They could still party -- as long as they showed up ready for work the next morning.

Once in college or university, CSC veterans would be more likely to stay for the degree or certificate, and to go into the workplace (or postgraduate study) with little or no debt and a resume full of work experience. They would still be in their mid-20s, with their lives and careers ahead of them, and employers would be delighted to hire such mature and capable workers.

Of course, we'll also need a big idea for creating the jobs such graduates will expect and deserve.