The more I read about the world's ailing financial markets, the more I become fascinated by the immeasurable cycle of human generosity known as gift economy. 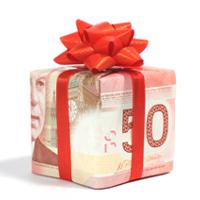 I'm not talking about the $11.4 billion retail boom on Black Friday, or the untold millions spent on holiday turkey. I'm speaking to the experiential value of unmotivated, no-strings-attached kindness. The language of economics, so often deployed as an inert tool for monetary accumulation, seems just as usefully applied to progressive, social ends.

After a year dominated by protests highlighting income inequality, corruption and corporate greed, I feel it's time to start thinking about the "upward spiral" set in motion each time you pass along a dog-eared, margin-filled book to a stranger, or casually offer your couch as a place to crash. While the payoff might not be as readily apparent as in financial transactions, that contagious feeling of goodness has tangible, community-building effects.

Nipun Mehta couldn't agree more. "It starts with conscious acts of small kindness, like making coffee for your spouse in the morning, paying the toll for the car behind you or smiling at the homeless man who is all-too-often just ignored," he says. "As many of us start doing these acts, it creates a new patterns of social interaction that ultimately create a gift economy."

Mehta is a Berkeley-based software-engineer-turned-activist who says the Occupy movement reveals an appetite for deeper human connection. Through more than a dozen non-profit projects, he's aiming to shake people out of their alienated for-profit experience. "Inequality is rooted in fear and consumption, while gift economy is rooted in love and contribution," he says. "Greed is the global pandemic of our times and the antidote is obvious: generosity."

Forgive me if all of this sounds incredibly wishy-washy. Most of us probably know that giving feels good, and our parents already taught us to share. But if you take a careful look at the societies and projects that thrive outside capitalist economics, a bigger picture comes into focus: a picture that values humans over currency, and builds alternative networks of trust and interaction.

My own introduction to an established gift economy was through the online community CouchSurfing.org. I was interested in spending a couple weeks shooting a documentary in New York City, and didn't have the budget to cover accommodations. Unsure about what could possibly motivate perfect strangers to share their homes for free, I cautiously gave it a shot, joining the website's 3 million members. The experience proved to be a life-changing give and take.

In two years, couchsurfing has taken me to concerts and bakeries in Portland and New York. It helped me explore the lush mountains and Portuguese-style villas of Swaziland and Mozambique. I've met and learned from photographers, human rights lawyers and touring musicians. I've played host to strangers hailing from rural Quebec and Poland, and discovered new secrets about my home in Vancouver.

From surfing couches, I've learned that we're wired to be compassionate and generous. The more you give into any community, the more you get out of it. And yet it's not possible to attach a dollar figure, because couchsurfing is almost entirely experiential. Skills and stories are exchanged, friends and drinks are shared, and all the while there's goodwill being quietly generated.

Wrap up something different

Mehta is interested in scaling up this concept even further. Putting his own skills to use, he started building websites for non-profits in the early aughts -- just to see what kind of "domino effect" might occur. "What started humbly with four volunteers has organically grown into an ecosystem of several hundred thousand," he says, "all without any paid staff."

This isn't a new idea, but a rather ancient one. Traditional societies have been practicing gift economy for thousands of years, before the logic of barter and trade was imposed.

Consider the Native American tradition of potlatch -- a primary economic system formerly practiced by the Coast Salish and other indigenous peoples in the Pacific Northwest. Potlatch gatherings aimed for redistribution and reciprocity; they celebrated births, deaths, marriages and other monumental events by giving away food, blankets and other essentials.

In Canada, potlatch was banned in 1884 for being a "worse than useless custom" according to one God-fearing legislator, seen as wasteful and unproductive in contemporary society. An era of rationalized profit was swiftly ushered in, and somehow our human capacities lost their non-monetary value along the way.

The trouble is, all this compassion and empowerment stuff can't easily be measured. Unless you have a moment like the Japanese tsunami, where $78 million in lost cash was actually returned to the government, it's really hard to see the scope and breadth of gift economy.

Many of us are thinking about gifts this time of year, but participating in the holiday shuffle isn't the point. "If we reduce gift giving down to a mechanical ritual or a market-driven peer pressure, it loses its essence," Mehta says. "Gifts, in their pure form, connect us, irrespective of the nature of the material stuff that is exchanged."