It's been a long five years for Stephen Harper, his gaggle of ex-Reformers and the gang of three from Harris-era Ontario -- Jim Flaherty, John Baird and Tony Clement. Long and infuriating, I am sure, because for all that time they had to pretend that they were a government. They had to masquerade as people who believed that government could be a force for good. They even "stimulated" the economy. They were a minority government and the big ticket items they really wanted to get their teeth into were out of reach. 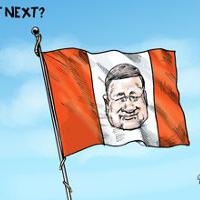 They couldn't slash Medicare or gut the Canada Health Act. They couldn't cut transfers to the provinces, or further weaken EI. They left the public services unions with their rights intact. They had to leave education alone (more or less). And they didn't risk slashing the civil service they hate so much.  Even the CBC has been spared (though they raised millions from their loyalists attacking it in fundraising letters).

The frustration level, especially for Harper, must have been almost unbearable. Remember, this is a man who got so frustrated being in Opposition as right-hand man to Preston Manning that he bolted from politics altogether. The place he chose to cleanse himself after all those years having to play the democrat was the National Citizens Coalition, by a big margin the most right-wing organization on the national scene. He said he was glad to be out of politics so he could say what he really thought.

Harper was hoping for revenge in the last election and blew it by attacking culture. He's eager for another try, making Jack Layton an offer he had to refuse. And if you want to see what real revenge looks like, give this crowd a majority and they will unleash the most destructive, nation-changing blitzkrieg in living memory. I can still remember the night that Brian Mulroney won the historic free trade election 1988. It was devastating. But Mulroney was a kindergarten teacher compared to Stephen Harper. Free trade started us down the road to Americanization. Harper will take us to the end of that road and beyond.

Every once in a while, some right-wing pundit will opine (hoping to lull us) that Harper has actually gotten accustomed to governing, that his hard edges have been worn down by the day to day responsibility of running a country. It's a ruse. If you believe that, then perhaps you would like to have a look at this bridge I have for sale.

There is nothing to suggest that Harper has mellowed. He is still the past-president of the National Citizens Coalition and that is where his heart and mind remain. He will apply its slogan "More freedom through less government" with an efficient and ruthless dedication.

Harper's "governing" style has done more to put our arcane and anti-democratic voting system under a spotlight, and a solid majority of Canadians now support a proportional representation system of voting. Our first-past-the-post voting system combined with cabinet government has always been vulnerable to executive dictatorship. But no one really imagined what that could look like until Harper took the reigns.

What would happen with a Harper majority?  That dictatorship description would look more and more real and less and less hyperbole.

One of the few checks on Harper's power has been the parliamentary committee structure, where the Opposition -- which controlled the committees through their numerical majority -- could do far more than they could in the House of Commons: deciding what issues would be investigated, calling witnesses (and even subpoenaing them), demanding documents and shining the public eye on otherwise secretive workings. The committees infuriated Harper the control-freak, to the point where he produced a book of dirty tricks for his MPs to use to scuttle their work.

With a majority, all of that will end. The committees will be effectively shut down. The Conservative majority will decide what's discussed, who testifies and what documents are asked for. There will be no Afghan detainee scandal, because the relevant committee (if it still exists) won't be asking for any embarrassing documents.

Forever funded, and closed off

One of the few positive legacies of the Chretien era was the banning of corporate (and union) donations to political parties and the public funding of those parties through a formula based on the number of votes received in the last election. That would be one of the first things to go under a Harper majority. The Conservatives' superior fundraising machine (and its extremely dedicated Christian funding base) will mean that the Conservatives will be able to outspend the other parties for the foreseeable future -- and be able to campaign year round between elections.

For all his talk about Senate reform, it is extremely unlikely that it will ever happen now that Harper has shoveled a truck load of hyper-partisan neo-cons into the red chamber. The body of sober second thought has already showed its hand by making the almost unprecedented move of killing a climate change bill with no committee hearing or debate, a bill passed by the House of Commons. There will be nothing in the previously-august chamber to slow down anything coming from a majority Harper government.

Numerous critics, including government agencies, have been extremely critical of the government's handling of Access to Information requests. In July 2009, Sebastien Togneri, then director of parliamentary affairs for Public Works Minister Christian Paradis, ordered civil servants to "unrelease" documents already released under the act. There is widespread belief that such orders are actually routine. With a majority government, information could dry up completely.

Groups with charitable status -- environmental organizations, anti-poverty groups, progressive think-tanks, women's organizations -- cannot spend more than 10 per cent of their staff time on advocacy activity on pain of possibly losing their charitable status. Before the last election, many of these groups received warning letters about participating in any way in the election. It is a virtual certainty that Harper will toughen up rules regulating civil society groups.  They could apply the defunding strategy applied to women's groups and international development organizations to every sector, including First Nations organizations. CIDA -- of KAIROS and Bev Oda fame -- will simply become a blunt instrument of Harper's extremist foreign policy.

The various watch-dog agencies, many of them already effectively silenced by the appointment of weak and compliant directors, will see their work further emasculated by the rewriting of legislation, budget slashing, withholding of information and more intimidation. Watch kittens.

This one really counts

Harper doesn't have to do much about the fifth estate, as the media has been largely quiescent over the past five years, virtually never drawing the obvious conclusion from all the individual scandals and abuses of power: that we have a rogue government run by a sociopathic, hateful prime minister who has deliberately poisoned our democratic system. There's just one thing left to do and it is both substantive and symbolic: get rid of the CBC.

With a majority government, and a senate full of Conservative hacks willing to throw democratic convention out the door, one of the few institutions left that can serve as a check on executive power are the courts. Harper has already replaced hundreds of 1,100 federal judges who sit on superior and appeal courts in each province, as well as the Federal Court, and the Federal Court of Appeal. Many, though not all, were small or large C conservatives. After all, it was a minority government. But by the end of this year, the Supreme Court of Canada, which Harper has accused of being "too left-leaning," will see eight of its nine judges eligible for retirement, leaving a Harper majority free to replace them with the most conservative candidates it can find.

And that's just his plans for democracy. Be very afraid. And then drop everything, learn about Harper (here and here), work on the election, open your cheque book, talk to your friends and colleagues, insist that they pay attention -- and vote. Tell them if they don't, they'll be responsible for the resulting dictatorship and the end of the country as we know it.