More than 65 Hollywood celebrities and Indigenous climate activists have signed a petition asking the Royal Bank of Canada and its subsidiary City National Bank to stop financing fossil fuel projects and defund the Coastal GasLink pipeline in northern B.C.

“It has come to the undersigned’s attention that our industry’s premier ‘bank to the stars,’ City National Bank, has a problem,” read the statement.

“Its parent company, Royal Bank of Canada, is financing the climate crisis and disregarding the rights of Indigenous peoples.”

The campaign calls on RBC to withdraw support from the Coastal GasLink pipeline “effective immediately.”

Wet’suwet’en Hereditary Chiefs made the same demand last month after they met with several high ranking members from the bank.

This week Molly Wickham, who holds the hereditary name Sleydo’, spoke at a virtual media conference organized to reiterate the demands to RBC.

Wickham was joined by actor Mark Ruffalo, who also called for public pressure on the banks to stop funding fossil fuel energy.

“The signatories in this letter have core values that the RBC is violating,” Ruffalo said, adding that while they do not wish to leave their bank, they do not want their money in any way associated with the “brutalization and erasure of any First Nations people.”

“At this point, the most effective thing any of us can do is pull our money out of institutions that continue to fund the fossil fuel industry,” Ruffalo added.

RBC’s financing of the Coastal GasLink pipeline has been the subject of scrutiny since last December when Greenpeace Canada activists protested outside the bank’s corporate headquarters in Toronto over its funding of fossil fuel projects. Activists claimed that Canada’s top five banks are providing $1.95 billion in financing for the CGL project.

This is not the first time celebrities expressed solidarity with the CGL pipeline opposition in northwest B.C.

“By encouraging illegal activity in the name of ‘conservation’ you are, in reality, harming the hard-working people — Indigenous and non-Indigenous — who are leading the way on providing environmentally sustainable solutions for my province,” Ross, a former chief councillor for the Haisla Nation, told DiCaprio in an open letter.

The 670-kilometre-long CGL pipeline in northwestern B.C. by TC Energy is being built to deliver natural gas from the Dawson Creek area to an LNG Canada facility under construction in Kitimat.

Pipeline opponents have repeatedly stressed environmental concerns of the pipeline being built under the Wedzin Kwa, otherwise known as the Morice River, without consent from Hereditary Chiefs.

However, 20 elected First Nation councils along the pipeline corridor had signed benefit agreements relating to the project. 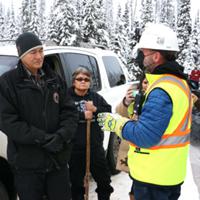 Wet’suwet’en Call on the UN to Support Land Battle

As part of this agreement, the First Nations are poised to take a 10-per-cent ownership stake in the CGL project once the pipeline goes into operation.

In a statement, TC Energy said it’s concerned that important facts are not being shared with groups and individuals who are concerned about Indigenous rights and climate change issues.

"Our Indigenous partners have been instrumental in the construction of Coastal GasLink. Since construction began, over $1 billion in contracts have been awarded to local Indigenous businesses and significant capacity is being developed in these communities through these partnerships and local job creation," said a TC Energy spokesperson.