Members of the Wet’suwet’en Nation are again calling on the United Nations to pressure the Canadian government over industrial development on its traditional territory.

Members of the Gidimt’en Clan of the Wet’suwet’en have submitted an eight-page document to the UN Human Rights Council, requesting it be presented at the council's regular session in September.

“The governments of B.C. and Canada continue to violate Wet’suwet’en jurisdiction and the [United Nations Declaration on the Rights of Indigenous Peoples],” the submission reads.

“Reconciliation will not come at the barrel of a gun. Canada and B.C. must withdraw the RCMP and associated policing and security services from our territory, and must immediately halt construction and suspend all permits for the construction of the CGL pipeline.”

They also extended an invitation for a UN delegation to visit the nation’s territory in northern B.C.

The Coastal GasLink pipeline is being built to carry gas from the province’s northeast to an LNG plant under construction in Kitimat.

Hereditary Chiefs have opposed the project.

It is supported by dozens of legal experts, Indigenous rights advocates and organizations, including the Union of BC Indian Chiefs, Amnesty International Canada and the BC Civil Liberties Association.

“They continue to do what they're doing. They're literally not paying attention to our submissions in terms of environmental laws, in terms of human rights, racism from the RCMP, the whole nine yards.”

Woos says the nation is calling on the UN to provide outside, non-partisan intervention in the high-profile dispute that has continued for more than three years.

The submission outlines more than a decade of pipeline resistance on Wet’suwet’en territory, which has led to multiple police actions and roughly 75 arrests.

“Since 2009, in accordance with our governance structure, a number of re-occupation sites across Wet’suwet’en territory are affirming our jurisdiction to our territory,” the submission says, adding that Wet’suwet’en families, Elders and children have moved to occupy cabins and other establishments on the territory.

It's not the first time the Wet’suwet’en have taken their concerns to the UN.

Wet’suwet’en Hereditary Chief Na’Moks, whose English name is John Ridsdale, and other nation members have spoken before the UN on several occasions since 2016 to share their concerns about the project.

Na’Moks last spoke in April 2019, three months after the first police action on Wet’suwet’en territory, to the UN Permanent Forum on Indigenous Issues in New York.

In December 2019, the UN Committee on the Elimination of Racial Discrimination issued a warning to the Canadian government over its concern the government had not received free, prior and informed consent before allowing projects like the Site C dam, Trans Mountain pipeline and Coastal GasLink through the territories of Indigenous nations that oppose the projects.

In 2020, the committee asked Canada to develop “a legal and institutional framework to ensure adequate consultation.” It gave the federal government until November 2021 to respond.

Canada missed that deadline. At the time, a spokesperson for Canadian Heritage said that the government intends to submit periodic reports to the International Convention on the Elimination of All Forms of Racial Discrimination this year.

In Monday’s submission, the Wet’suwet’en highlight their “unbroken, unextinguished, and unceded right to govern and occupy our lands,” which encompass 22,000 square kilometres in northern B.C.

It also points to the 1997 Delgamuukw decision, a groundbreaking decision by the Supreme Court of Canada that affirmed Wet’suwet’en and neighbouring Gitxsan Nation title had never been extinguished.

“In the case of the Wet’suwet’en, it affirmed that our Title is collectively held with the hereditary leadership as the proper rights holder and that the Baht’lats [feasts] is the forum of Wet’suwet’en governance,” the submission reads.

While chiefs from all five clans have opposed the pipeline project, five of the nation’s six band councils, which were formed under the Indian Act to govern reserves, have signed benefits agreements with Coastal GasLink.

The pipeline company and provincial government have repeatedly pointed to the agreements as indicating support within the nation.

Wet’suwet’en opposition to pipelines through the territory is long-standing. The Unist’ot’en Healing Centre was established in 2010 near the pipeline route in an effort to bring Wet’suwet’en members back to the yintah, or territory, while also blocking access to pipeline exploration.

For nearly a decade, a gate installed by the Unist’ot’en house group across the Morice West Forest Service Road at the Morice River blocked access to portions of the territory.

In December 2018, the BC Supreme Court issued an interim injunction to Coastal GasLink that barred anyone from blocking access to pipeline worksites or access roads.

On Jan. 7, 2019, RCMP enforced the injunction at Gidimt’en Camp, which had been established to support the Unist’ot’en, arresting 14 people. Days later, Unist’ot’en members agreed to open the gate while the injunction remained before the court.

A year later, on Dec. 31, 2019, the BC Supreme Court extended the injunction for the duration of pipeline construction.

As the pandemic set in, RCMP continued to patrol the remote resource road, which remained unimpeded until late 2021. However, in September, nation members again enforced the Hereditary Chiefs’ eviction order against Coastal GasLink and occupied a worksite where the company is preparing to drill under the Morice River, known to the Wet’suwet’en as Wedzin Kwa, a culturally significant feature for the nation.

One of the journalists was released the same day and two others spent several days in custody before they were released. The pipeline company announced on Dec. 24 that it would not pursue civil contempt charges against the journalists.

The others arrested in November are scheduled to appear in BC Supreme Court on Feb. 14.

In Parliament Monday, Nunavut MP Lori Idlout compared the response to current protests in Ottawa, where truckers and their supporters who oppose vaccine mandates have clogged downtown roadways and created disturbances for local residents, to Indigenous protests.

“This freedom convoy exposes the injustice that First Nations, Métis, Inuit and people of colour experience in Canada. The convoy has the freedom to demonstrate unrestricted violence, mainly without punishment,” she said. 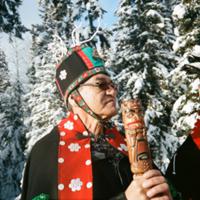 ‘The Wet’suwet’en Need to Lead This. That’s All There Is to It’

By Monday afternoon, Ottawa police said they had arrested 20 people and handed out hundreds of tickets as the protest extended into its 11th day.

“On the other hand, Indigenous peoples live in fear of reprisal for protecting Indigenous lands as they are met with violence by law enforcement,” she said.

“I stand with the Wet’suwet’en Hereditary Chiefs. I call on the Liberal government to protect Indigenous peoples’ rights as accorded in Section 35 of the Constitution Act, the United Nations Declaration on the Rights of Indigenous Peoples, and to uphold the rule of law.”

Chief Woos said Monday he didn’t know when to expect a response from the UN to the recent request.

He also didn’t rule out more blockades on the nation’s territory.