After two deaths, assaults that left two young men with permanent disabilities, a stabbing and a burn injury, the city and park board are finally planning to add showers, more washrooms and a warming tent to a tent city that has been in Vancouver’s Strathcona Park since June.

The improvements come as Vancouver attempts to prepare two city-owned properties, the 2400 Motel on Kingsway and the Jericho Beach hostel, to house people who are homeless.

But the city is still waiting for the needed provincial funding, Sandra Singh, the senior city staffer who holds the homelessness file, told media during a news conference Monday.

“We are not at this point ready to go with these sites,” Singh said.

The city is also trying to secure two more locations to use as indoor shelters, Singh said. With the 2400 Motel and Jericho Beach hostel, the new spaces would total around 300 spots. Singh added that the city is looking to increase the overall capacity of shelter and housing spots, and not reserve any one location for people who are currently homeless in a certain location, like Strathcona Park.

Around 200 people currently live in the park, and behind the scenes, park board commissioners have been making plans to clear the camp when those housing and shelter options are in place. During an in-camera meeting on Nov. 16 commissioners voted to support the park board’s general manager in issuing an order for the camp residents to leave the park.

Commissioners also authorized the general manager, Donnie Rosa, to apply for a court injunction to clear the encampment if the order isn’t effective.

The decisions made during the in-camera meeting only came to light Monday in a Vancouver Sun story.

Fiona York, a community activist who has been supporting the camp, said it was a shock to read about the plan in the newspaper. Camp residents should have been consulted, she added.

York said it was disappointing to see the park board and city try the same strategy used at a previous tent city at Oppenheimer Park and other previous Vancouver encampments. 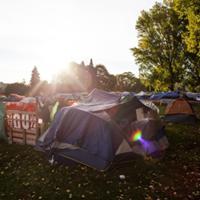 She said camp leaders have been asking for showers, a warming tent and a supply of fresh water for seven months. Currently, bathrooms at the park are closed and locked at dusk, leaving no place for residents to wash their hands during the COVID-19 pandemic.

“These things should have been provided right from the beginning. It's basically human rights — in any refugee camp, these things would be provided,” York said.

“Also things like electricity, and internet access so people can actually find information and have information around health and safety. Just all the essentials that should have really been provided from the beginning.”

Two men died at the park last week: one man was found outside a tent on Dec. 6, and the other was found on Dec. 10 inside an RV on Raymur Avenue, where people have lived in their vehicles for years. The cause of the deaths is not yet known.

But with deaths from overdoses soaring during the pandemic, Karen Ward, a drug policy activist who works with the City of Vancouver, said an overdose prevention site is needed in Strathcona Park.

Singh said staff “will be in discussions around ways to support harm reduction.” York said the camp is well-equipped with the opioid overdose reversal drug naloxone, and camp residents are encouraged to use drugs with other people nearby.

Given the number of deaths from tainted drugs, Ward said that isn’t enough. 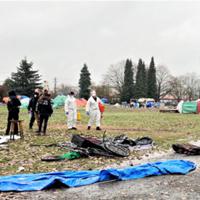 A Man Has Died at Vancouver’s Strathcona Park Tent City

“It would be great if there was a public health nurse there half the day, [that could] train some people to work there in a better way... because things are just falling apart,” she said.

Ward also called for a hygiene station to be set up to offer hand washing, hand sanitizer and masks.

Jamie Maclaren, a lawyer who lives in the Strathcona neighbourhood, said he’s been disappointed by the slow pace of the city and park board’s response. When a motion was passed on Oct. 8 to spend $30 million to quickly house people who are homeless, he expected some sort of interim shelter services to be offered to people in the tent city, whether indoor shelter spaces or a disaster relief-style tent shelter that could be erected in the park or some other location.

But Coun. Pete Fry said he was leery about adding any “enhanced shelter services” to the park.

“Given past experience with the camp organizers, however, I think this would serve to further entrench the park as a permanent tent city,” he told The Tyee in an email. “I’m firm that any city intervention for enhanced shelter services in the park needs to be balanced with a clear city-led management and decampment strategy.” 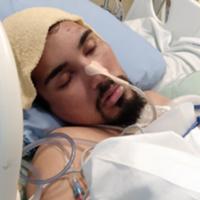 A Man Assaulted at Strathcona Park Lost His Leg

Maclaren said he feels there’s been a glaring lack of political leadership on the issue. He said it looks like it’s possible the camp will be in its current form until February.

Maclaren said he heard a propane tank explode in the park earlier this week. Vancouver Fire and Rescue Services say a man was burned on his hands and arms in another incident on Dec. 7.

York said that if a warming tent had been provided to the camp months ago, people may not have been driven to try to warm themselves using propane or other fuels.

“Rather than just saying, ‘You can't do that,’ the response should be, ‘Let's provide a safe way to keep you warm,’” York said.