Vancouver city council voted Thursday to spend up to $30 million to buy or lease hotels, apartment buildings and single-room occupancy hotels to quickly provide housing after a spike in homelessness caused by COVID-19 restrictions.

Vancouver Mayor Kennedy Stewart proposed the plan as an emergency response to an increase in homelessness in the city that has been made worse by COVID-19 restrictions.

Council asked city staff to look into using two properties in particular that are already owned by the city and could be used to house people right away: the 2400 Motel on Kingsway and the Jericho Beach Hostel west of Kitsilano.

But Andrew Newman, the city’s associate director of real estate services, said it could take six to eight months to reach lease and purchase agreements with other property owners.

Before council voted on the final motion, Coun. Rebecca Bligh successfully added an amendment that would allow the money to be used to buy or lease space for emergency shelters as well, with the intent to move people out of a tent city currently located at Strathcona Park.

Coun. Jean Swanson spoke against that amendment, saying she feared that option would be “coercive” for people who don’t want to go to shelters.

City staff estimate 750 people in Vancouver are currently living outside and need immediate accommodation, with 200 of those people living at the tent city in Strathcona Park since July.

In May, a tent city that had been located at Oppenheimer Park for two years was removed after the province used an emergency public safety order to clear it and house many of the residents in hastily bought hotels.

Stewart questioned staff on their timeline for finalizing lease and purchase agreements to buy properties, reminding them it took BC Housing just seven days to lease hotels to accommodate Oppenheimer Park residents.

Newman said BC Housing spent large amounts of money to acquire hotels and motels quickly across the province this spring. For instance, the province spent $55 million for one hotel in Vancouver — the Howard Johnson on Granville Street.

Stewart said he is very confident that provincial and federal governments will step in and help with funding, especially for operating costs for the buildings.

But Coun. Colleen Hardwick questioned how the mayor could be so confident, and what the cost to Vancouver taxpayers would be if senior levels of government don’t help.

The city can’t go to the B.C. government for more help while the provincial election period continues. It could be mid-November before that period ends, because it will take extra time to count mail-in ballots in this pandemic election.

While there are homeless people living throughout the city, the discussion at council was dominated by the Strathcona Park tent city, with concerns about the spread of COVID-19 as well as crime and violence.

Several Strathcona residents who spoke to council said the tent city is “out of control.” Violent assaults have become common and have spilled over into the neighbourhood, they said, including an incident where a man chased another man with an operating chainsaw.

Council heard that some residents have found weapons in the street, Strathcona Elementary is now fenced off, and there has been an increase in thefts and break-in attempts.

Some speakers said they wanted the camp to be moved out of the neighbourhood entirely; one Strathcona resident, Sophie Low-Beer, suggested the army should be called in.

But others said they would welcome a temporary disaster relief shelter in the same location — as long as it was fully staffed to provide medical and mental health help to tent city residents.

“Keep it in Strathcona,” said Marie Willcock, a Strathcona resident who spoke to council. “This is not an issue that can or should be moved.”

Staff had prepared a memo to council on five options, including buying housing; setting up managed encampments; using city-owned buildings for shelters; allowing tiny home villages; and identifying a site for a permanent RV park.

While council focused on the option to buy or lease housing units, there will be further discussion of tiny homes next week at council, when a motion brought forward by Coun. Pete Fry will be discussed. 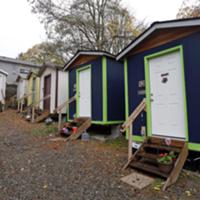 In a phone interview with The Tyee, Claudette Abraham said she found refuge at the Strathcona Park encampment after being evicted from an SRO earlier this year. Abraham was at city hall with tent city organizers and other residents to speak to council.

Abraham said she took a trip to Winnipeg this spring, fearful the spread of COVID-19 could mean she would never see family members again. When she got back to Vancouver, she said, she had gone blind because of untreated diabetes and found she no longer had housing.

After a stint in hospital, Abraham found a place in another SRO, but only stayed one night. She said she’d had previous difficulties with the way the building staff treated her, and it made her feel anxious to be there. The next day, Abraham said, she went to the tent city, where she felt safe and slept soundly.

Abraham said a group of around 100 tent city residents look out for and help each other. She said temporary housing is not a fix — but she would welcome permanent housing that was more like a normal apartment, with a kitchen, bathroom and more space than the 100 square feet of an SRO room.