The mother of a man who was assaulted at a tent city at Vancouver’s Strathcona Park says he is still recovering from a number of serious injuries and has lost one of his legs.

Connie Sinclair told The Tyee that her 24-year-old son Carl had been living in a Downtown Eastside building, but was evicted after a fight with his girlfriend in mid-September and ended up in the camp at Strathcona Park, about two kilometres away.

On the evening of Sept. 21, Sinclair was discovered at the park with serious injuries. Police believe he had been lying there for around 12 hours throughout the day before anyone called for help.

Sinclair said she last heard from her son on Sept. 17. When she wasn’t able to get in touch with him she filed a missing persons report, then started calling hospitals. That’s how she learned her son was at Vancouver General Hospital with serious injuries.

Sinclair, a member of the Skuppah Indian Band, took the bus from Kamloops to be near her son. He is now out of intensive care and conscious, but remains in hospital. His injuries include a cut and possibly burned arm that has affected movement in his fingers, broken ribs and a knife wound on his chest.

Sinclair said her son’s leg had to be amputated because of the way he had been left lying on the ground for so long.

“He lost his leg due to this crime,” Sinclair said. “The way he was laying, the infection kicked in and there was no blood flow to his leg.”

Sinclair says she now plans to move to Vancouver to care for her son.

Sinclair said police have interviewed her and she believes they are working hard to find out who did this to her son. The Vancouver Police Department did not respond to an inquiry from The Tyee about whether they had identified a suspect or charged anyone.

When Sinclair first learned what had happened, she was furious with the tent city.

“I wanted to burn the whole thing down,” she said.

But around six years ago, Sinclair was living on the street in Maple Ridge, and found refuge in a tent city there. 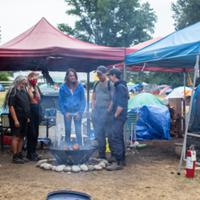 People who live at the tent city in Strathcona Park, home to about 200, say they’ve found a sense of community there. But residents also say violence is common. A week after Sinclair’s son was assaulted, another man was stabbed repeatedly in his tent and found hours later on a nearby street.

Sinclair said she doesn’t want to see the tent city shut down, but does want to see it become safe.

She suggested that something similar to the Bear Clan Patrol, an Indigenous-led community safety patrol that operates in Winnipeg, might help make people feel safer reporting crimes.

“Nobody wants to be that snitch or a rat — no one wants to be labelled that or your name is wrecked all over the street, if you go running to the police,” Sinclair said.

Sinclair said she also wanted to thank the person who called 911 to report that her son was injured.

“I’m sure they were scared to phone, but they did, and I’d really like to thank them for making that phone call.”