Chrissy Brett, one of the tent city organizers, said a man who had just moved into the encampment was stabbed near the shoulder by a man who doesn’t live at the tent city and had been asked to leave many times.

Brett said the resident had to get a number of staples and has damaged muscles and tendons but is back at the tent city.

Vancouver police confirmed a man was stabbed Sunday “after a group of people in the park were chasing the suspect for something unrelated to the stabbing. When the victim got closer to the suspect, the suspect stabbed him.”

On Friday afternoon, the police said they have recommended charges to Crown counsel in relation to the stabbing after what they called a “thorough investigation."*

Policing in Vancouver tent cities has been controversial. At Oppenheimer Park — where a large tent city was in place for two years before it was shut down in May — activists often complained about a police presence they said was too frequent and intrusive. In 2019, police said the Oppenheimer Park tent city had become so dangerous they would only visit in groups of four.

With over 300 tents, Strathcona Park is even larger than Oppenheimer Park. Brett said she wants to see more involvement from police when there are ongoing safety issues such as the events that she believes led up to the stabbing.

“We’ve asked them to leave [a patrol car] here parked during the day and maybe one parked towards the other end, and they’ve said that’s not possible,” said Brett, who has supported the Strathcona Park tent city, as well as previous encampments near Crab Park and Oppenheimer Park.

Strathcona residents have reported an increase of concerning incidents, including one where a man lifted up a five-year-old and shook him at another neighbourhood park.

But Brett said unhoused people are more likely to be victims of violence than perpetrators.

She said the man she believes was responsible for the stabbing had been involved in earlier incidents at Crab Park and Strathcona Park. 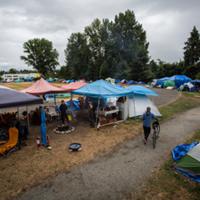 Tent Cities Aren’t Going Away. Why Not Provide Sanctioned Sites?

“It just seems as though there is this top-down, systemic colonial issue with police that homeless people are bad and violent and dangerous, and no one should go near them,” Brett said.

Brett said the camp has held regular meetings that have included the BC Ambulance Service, the parks board, the Strathcona Residents' Association and local community policing volunteers.

But the Vancouver Police Department, the City of Vancouver and Vancouver Fire Rescue Services have been absent from those meetings, according to Brett.

“We’ve always encouraged VPD to come to the table and have a conversation,” Brett said.

*Updated on Aug. 21 at 4:42 p.m. to include a police response received after deadline.