Downtown Eastside residents and service organizations are relieved to see Canada Post once again deliver mail to addresses on East Hastings Street, although not all buildings are getting their mail.

Mail delivery had been suspended since the spring, when COVID-19 precautions first started. Delivery was halted because some mail deliverers were not able to stay physically distant from others, as recommended by B.C.’s provincial health officer Dr. Bonnie Henry, according to Canada Post.

Residents of Tellier Tower at 16 E. Hastings previously spoke to The Tyee about how their lives had been affected by the six-month service cut.

While their housing operator, PHS Community Services, had arranged to have the mail delivered to its head office and then handed out to residents, social assistance and disability cheques were arriving late.

The situation was creating money worries, stress and conflicts with building staff, tenants Jo McRobb and Liane Gladue told The Tyee — and it felt like tenants were being discriminated against because they are poor.

It was also putting people in harm’s way: Gladue said that one man she owed money to because of the delay in getting her cheque was “livid” when she told him she couldn’t pay him back.

But last Friday, McRobb noticed mail carriers were once again in her building delivering the mail, and they assured her regular mail delivery would continue.

In an email to The Tyee, Canada Post said “after consultation with our local health and safety committee, some buildings resumed regular delivery.”

“These addresses were deemed to be safe, as physical distancing at these locations is now possible.” 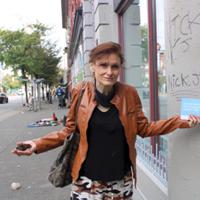 Canada Post says the problems mail deliverers are encountering include both crowding on the sidewalk on East Hastings, and difficulties maintaining distance inside the buildings, which are mostly single-room occupancy hotels.

Dense crowds of people are common on East Hastings, especially in the three blocks between Carrall and Gore streets. In a neighbourhood where many people live in tiny SROs or are homeless, it’s common for the sidewalk to be used for socializing, vending and buying and using drugs.

First United’s shelter at 320 E. Hastings is used as a mailing address by many people who are unhoused, but it was also one of the buildings Canada Post refused to deliver to. Instead, staff would go to a Canada Post depot at 333 Woodland Dr. to pick up the mail — a hassle for staff already busy with many other duties, said Keely Hale, director of programs for First United.

Mail delivery is very important for people who are living in poverty, Hale said. When GST cheques were being delivered on Oct. 9, there was a line of people waiting in the rain for hours, and staff stayed late to make sure everyone got their cheque.