Liane Gladue, McRobb’s neighbour, said the delivery disruption meant that her disability cheque has sometimes come two days late, forcing her to borrow money to tide her over. One week, the late payment put her in a scary situation.

“I borrowed money, $20 from a gentleman, and he was livid,” Gladue said. “I was trying to explain to him and he was like ‘Yeah right, yeah right.’ I ended up having to pay him double — I had to pay him $40.”

And McRobb raised the question of whether mail-in ballots for the coming provincial election would be delayed, possibly preventing people from voting.

Elections BC says it knows about the situation and has been in touch with Canada Post, and understands that “delivery arrangements are in place for those locations.”

But the agency says voters who have concerns about receiving their mail-in ballots can contact Elections BC at 1-866-661-8683.

Canada Post says mail delivery to several addresses along East Hastings Street has been suspended because crowds of people on the sidewalk have prevented mail carriers from practising physical distancing.

Dense crowds of people are common on East Hastings, especially in the three blocks between Carrall and Gore. In a neighbourhood where many people live in tiny single-room occupancies or are homeless, it’s common for the sidewalk to be used for socializing, vending and buying and using drugs.

Homelessness and fatal overdoses have both increased in the Downtown Eastside as COVID-19 precautions reduced the services that are normally available to people in the neighbourhood.

Tanya Fader, director of housing for PHS Community Services, said the agency was able to get mail delivery back at Woodward’s Community Housing following a CBC story about the delivery suspension in June.

But five of its buildings, including Tellier Tower where McRobb lives, still aren’t getting mail delivery.

Fader said Canada Post delivers mail to the PHS head office and staff then distribute mail to some of its buildings. Canada Post says residents of others can also pick up their mail at a depot at 333 Woodland Dr. — about a 30-minute walk from the neighbourhood. It’s open from 10 a.m. to 2 p.m. weekdays.

Fader said she understands concerns about crowding on the streets. But she questioned why mail carriers can’t do what PHS staff do — wear a mask, walk a slightly different route, or walk on the other side of the street if crowding is too intense in one area.

“I’d be curious to know if they’re doing this in any other neighbourhood,” Fader said. 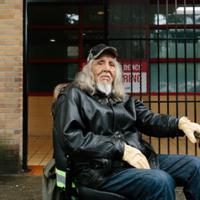 Downtown Eastside Residents Still Waiting for Visitors to Be Allowed

A resident of Sequel 138, a condo building at Main and Hastings that includes one floor of social housing, confirmed to The Tyee that it had been included in the delivery ban initially, but mail service has now resumed.

When The Tyee visited Tellier Tower, the sidewalk in front of the building was clear and the building’s lobby was empty.

“It’s a ridiculous argument — they could easily come into this building,” McRobb said.