A coalition including hereditary chiefs and the BC Civil Liberties Association today called on the RCMP Civilian Review and Complaints Commission to investigate “improper and unlawful” police actions in cutting access to Wet’suwet’en territories.

In a Vancouver press conference, BCCLA executive director Harsha Walia said an injunction and enforcement order granted to Coastal GasLink pipeline company on Dec. 31 does not mention Indigenous camps or residences on Wet’suwet’en territory, but police are still restricting access to the area south of Smithers.

The RCMP has set up a checkpoint on a forest road leading into the area and denied access arbitrarily, the groups said.

“The RCMP checkpoint, which is at the 27-kilometre mark, lies completely outside the scope of the enforcement power granted to the RCMP by the injunction,” Walia said.

“We are urging the [complaints commission] chairperson to launch a chairperson-initiated complaint and public interest investigation regarding the improper and unlawful actions of the RCMP in implementing and enforcing a checkpoint and exclusion zone on Morice West Forest Service Road in Wet’suwet’en territory.”

The complaint was jointly filed by BCCLA, the Wet’suwet’en hereditary chiefs and the Union of BC Indian Chiefs, and is supported by West Coast Environmental Law and Pivot Legal Society.

Walia said it includes eight firsthand accounts from Wet’suwet’en Nation members, media, legal counsel and those bringing food, medical or emergency supplies, and establishes a pattern of exclusion from the area.

Union of BC Indian Chiefs Grand Chief Stewart Phillip warned the situation is “very serious, dangerous and volatile,” comparing it to the 1990 Oka crisis.

“RCMP officers at the checkpoint have cited a range of inconsistent and shifting policies and procedures to those who are turned away, all of which are arbitrary.”

“What we’re suggesting now is this is a very overbroad, discretionary and punitive policy implemented by the RCMP,” she added.

On Jan. 13, the day the checkpoint was established, RCMP turned away media outlets, including The Tyee, saying that only accredited journalists approved by senior officers would be permitted access to the area. On Jan. 14, The Tyee was allowed through to kilometre 39 with proof of media affiliation and identification.

Since then, legal observers, who are trained to be witnesses in the event of a police action, have been turned away at the checkpoint because they aren’t carrying tire chains and radios. They were also told only lawyers licensed to practise in B.C. would be allowed past the checkpoint.

Irina Ceric, a faculty member at Kwantlen Polytechnic University in Surrey and a non-practising lawyer, described an “ever-shifting set of circumstances that [RCMP] may or may not let you in.”

“Frankly, I still don’t know why one day I couldn’t go in and one day I did go in,” said Ceric.

Ceric said when she attempted to pass the checkpoint with lawyer Noah Ross, whom she said has clients behind the checkpoint, and a trained legal observer they were initially told the observer would be allowed in.

Ceric said they were driving a 4x4 truck and the weather was “lovely and clear.”

The B.C. government website states that “Most resource roads are ‘radio assist’ and use of mobile radios for communicating location and direction is not mandatory.”

When Ceric returned the next day with the requested equipment, she was allowed through after showing identification and says the officer on duty did not ask for chains or radio.

“[We were] just really sort of struck by how arbitrary this treatment has been. It really seems, from my experience, from my conversations with others, that you’re kind of at the mercy of the luck of the draw in terms of which police officer you get and which policies they decide they’re going to enforce that day,” she said.

RCMP have cited “hazardous items of fallen trees and tire piles with incendiary fluids” along the Morice forestry road between kilometre 39, where access is blocked by felled trees, and camps at kilometres 44 and 66.

Accessing the area by air has also proved challenging.

On Tuesday, RCMP Cpl. Madonna Saunderson responded to multiple requests for clarification from The Tyee about whether media could be flown in. “Any decision to fly rests with the helicopter companies who we encourage to seek independent legal advice on what may or may not be permissible under the terms of the injunction.” 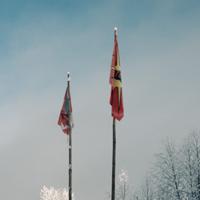 Requests to all four companies to fly media into the area have been declined.

Today’s announcement follows two complaints filed on Jan. 14 on behalf of individuals who were not allowed to cross the RCMP checkpoint.

“I would like to publicly call on Premier John Horgan to get off his high colonial horse and honour the Wet’suwet’en hereditary chiefs with his personal presence,” he said. “The hereditary chiefs have been asking for a face-to-face meeting with Premier Horgan and he has absolutely refused.”

Wet’suwet’en hereditary chief Na’Moks joined the press conference via telephone from Smithers. He said the complaint filed today is important because it raises broad issues.

“It’s very important that the Wet’suwet’en hereditary chiefs, our people and our nation stand together with everyone. The complaint against the RCMP must involve everybody. Because it is not only a Wet’suwet’en issue, it is not a personal issue, it is not just an Indigenous issue. This is a human rights issue, as well,” he said.

Tensions have been rising in the region since the B.C. Supreme Court granted Coastal GasLink a permanent injunction allowing the company access to the pipeline route on Dec. 31. Wet’suwet’en hereditary chiefs responded by evicting CGL from the area on Jan. 4 and closing the Morice forestry road, which leads to the pipeline construction site.

More than a year ago, on Jan. 7, 2019, RCMP officers enforced an earlier injunction by removing barricades and arresting 14 people, resulting in charges that were later dropped.

*Story updated on Jan. 30 at 2:45 p.m. to correct that the Morice forestry road is a radio-assisted road.