An RCMP letter to helicopter companies in Smithers, B.C., is creating more confusion than clarity around who is able to fly into Indigenous camps along the Morice West Forest Service Road cut off from vehicle traffic since early January.

As a result, companies say they are not flying anyone, including media, into the area.

The letter, which was sent to four companies on Friday, comes following a meeting Wednesday between RCMP deputy commissioner Jennifer Strachan and the Wet’suwet’en hereditary chiefs who oppose the Coastal GasLink (CGL) pipeline.

It outlines what is allowed under an injunction issued Dec. 31 by the BC Supreme Court granting the LNG pipeline company access to its work sites.

Wet’suwet’en Hereditary Chief Na’Moks said that while RCMP have said they would uphold the injunction, the order is specific to work sites and access routes. The RCMP’s limits on access to the camps go beyond the court order, he said.

“They’re basically holding our people hostage without the freedom to come and go as they please,” he said.

In the letter the RCMP says that flights for medical purposes, delivery of food, survival items or “necessities of life” and to remove people from the area are permitted. It does not state whether transporting people into the camps would be in violation of the injunction.

The RCMP did not respond to several emails from The Tyee requesting clarification about whether media could be flown into the Unist’ot’en Healing Centre at kilometre 66 of the Morice forestry road.

The camp is difficult to reach by road. In addition to winter conditions, RCMP have described “hazardous items of fallen trees and tire piles with incendiary fluids” blocking the roadway, making it hard for media and legal observers to access it if the RCMP decide to take action to enforce the injunction.

When contacted by The Tyee, all four companies who received the letter either said they were unclear about whether they could transport people into the area or that they had made it their own policy to not fly anyone in.

Karla Tait is a clinical psychologist and director of clinical services at the healing centre. She is also an Unist’ot’en house member. Tait said restricting access to the centre is “wildly beyond the scope of what’s covered in the injunction.”

“I am concerned because they have no legal basis to contact the [helicopter] companies in the first place,” Tait said. “It seems intentionally vague. It’s just providing enough uncertainty that it’s likely to be uncomfortable for helicopter companies that don’t want to be involved with any litigation.”

Tait said Sunday the group had not contacted helicopter companies to confirm that they would be willing to fly in supplies.

“If we wanted folks to come in for cultural activities like hunting and trapping, as far as we can tell from the letter that wouldn’t be permissible.”

On Monday the province announced that former Skeena-Bulkley Valley MP Nathan Cullen would act as a liaison between the province, RCMP, Coastal GasLink and Wet’suwet’en hereditary chiefs in the ongoing dispute.

“His focus will be on de-escalating the conflict surrounding the court-ordered interlocutory injunction regarding access to the Morice West Forest Service Road,” the province’s news release states.

Last week, Premier John Horgan sent Indigenous Relations and Reconciliation Minister Scott Fraser to meet with the hereditary chiefs. That meeting did not happen. Instead, the chiefs sent representatives to meet with Fraser at his Smithers hotel, saying they were in the previously arranged meeting with RCMP.

“It’s unfortunate that the Wet’suwet’en hereditary chiefs were unable to meet with us today. The most important part of any relationship is listening to one another and that was my only goal by being here today. We will continue to search for ways to continue dialogue and to attempt to achieve a peaceful and safe resolution,” Fraser said in a statement later that day.

Horgan was also in northern B.C. the previous week, with stops planned for Terrace, Kitimat, Fraser Lake, Vanderhoof, Prince George and Quesnel. He did not make any public appearances on Wet’suwet’en territory and declined to meet with the hereditary chiefs in person.

In an email to The Tyee Wednesday, RCMP Cpl. Madonna Saunderson said police will continue to allow time for dialogue between Wet’suwet’en hereditary chiefs, elected band councils, Coastal GasLink and government before enforcing the injunction.“When the RCMP are required to enforce the court-ordered injunction, we will seek clarity with the judge to ensure it is carried out in a manner as intended by the court, as we did in January 2019,” Saunderson said.

Tensions in the remote area 60 kilometres south of Smithers began to escalate in December 2018 when Coastal GasLink was granted an interim injunction against members of the Unist’ot’en house group who had been blocking access to the pipeline route at kilometre 66 of the Morice forestry road.

The neighbouring Gidimt’en clan responded to the injunction by adding a second camp and blocking access at kilometre 44 later that month. 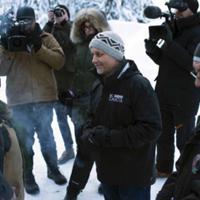 On Jan. 7, 2019, RCMP enforced the injunction by removing barricades and arresting 14 people, resulting in charges that were later dropped. Work continued on the pipeline until the BC Supreme Court approved an injunction on Dec. 31 that grants CGL access to the area until pipeline construction is complete.

On Jan. 4, 2020, Wet’suwet’en hereditary chiefs evicted CGL workers from the territory and closed the road at kilometre 39.

On Jan. 13, RCMP created a checkpoint at kilometre 27 and initially refused access to media and some Wet’suwet’en members. Those delivering supplies are now allowed access after showing identification and journalists must also provide proof of media affiliation.

On Jan. 24, RCMP at the checkpoint turned away legal observers, citing the need for tire chains and radios on the remote forestry road. Officers also stated that only lawyers licensed to practise in B.C. would be allowed access to the camps.