It’s a blustery Saturday in northern B.C. and Green party interim leader Adam Olsen has just stepped off a plane in Smithers.

He is heading to the Office of the Wet’suwet’en and a meeting with the hereditary chiefs fighting the Coastal GasLink pipeline through their traditional territory.

Hereditary Chief Na’Moks shows Olsen around the boardroom and explains a map of clan and house group territories. He points out photos of hereditary chiefs who paved the way for the nation’s land claims, and photos of Wet’suwet’en children. They remind the chiefs of their responsibility, Na’Moks said.

"Long-term planning," said Olsen, the MLA for Saanich North and the Islands who took over as interim party leader when Andrew Weaver stepped down in December.

Dominating the room is a table more than six metres long. It’s from the Smithers courtroom where the landmark Delgamuukw case was launched by the Gitxsan and Wet’suwet’en in Smithers more than 30 years ago. The case, ultimately decided by the Supreme Court of Canada in 1997, was critical in establishing Indigenous rights to traditional territories.

Sitting at that table, Olsen said he doesn’t have any simple answers to resolve the pipeline conflict. He stressed the importance of starting a conversation.

"It really starts with humility and listening and spending time and building relationships and having those conversations. I’ve been honoured to have the invite to come up and do it," Olsen said. "That invitation means something to me."

"We’re actually quite honoured to have Mr. Olsen here, as the leader of the Green Party of British Columbia," Na’Moks said. "Previously, we’ve had other leaders in here that would not stand behind their words when they talk to us. We expect better. I know we deserve better."

B.C. Premier John Horgan was also in the region on the weekend, with stops in Kitimat, Terrace, Fraser Lake, Vanderhoof, Quesnel and Prince George.

Horgan’s tour included a visit to the LNG Canada site in Kitimat that will use gas from the pipeline, but not a meeting with Wet’suwet’en hereditary chiefs who requested a meeting with him.

The same day, Horgan told media the provincial government would not respond to the Wet’suwet’en requests for a meeting.

"This project is proceeding, and the rule of law needs to prevail in B.C.," he said.

Olsen said Horgan’s position is troubling, especially as in November the legislature unanimously passed Bill 41, which commits the government to accept the provisions of the United Nations Declaration on the Rights of Indigenous People. That includes recognition of the right to participate in any decision-making through their own procedures and law.

"It’s problematic when you refer to the rule of law and Indigenous law is excluded from that," Olsen said. "I think it’s pretty clear that the Canadian court system has recognized Indigenous law as part of the broader legal context in this country and in this province. We’re sitting in territory where the court decisions reference and explain the very, very sophisticated order that this territory has been governed by since time immemorial."

He added that the province has a responsibility to find resolutions to land disputes that don’t involve the courts.

"I am here because I believe that we absolutely can find — all of us, all British Columbians, all Canadians — can find peaceful resolutions when we sit down at the table together, get to know everyone, build off the foundation with mutual respect," Olsen said.

"When you look at this table, this is a grand table. This table represents a very, very sacred representation of what’s been happening in this part of the country for a long time." 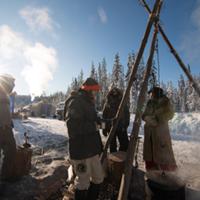 Olsen said his trip is consistent with the BC Greens’ approach to Indigenous concerns.

Olsen, a member of the Tsartlip First Nation, noted the party’s 2017 platform included a commitment to "respecting court decisions, the UN Declaration on the Rights of Indigenous People, and to the resolution of Aboriginal Rights and Title issues."

After the meeting Olsen travelled to the Morice forestry road, an hour’s drive from Smithers. He stopped at kilometre 27, where about a dozen Wet’suwet’en supporters have hastily erected a new camp to provide shelter to visitors just before the RCMP checkpoint controlling access to the pipeline route.

Olsen then passed through the checkpoint and travelled to a Wet’suwet’en camp farther along the road. He’s greeted by a crackling fire, a group of Wet’suwet’en supporters and Hereditary Chief Dsta’hyl of the Likhts’amisyu clan.

"I appreciate your words," Dsta’hyl tells Olsen. "Our elders, they used to say, we should not be raping the Earth, we should be nurturing the Earth. We’ve been telling the government that for years and they don’t hear us."

Olsen met with RCMP at the Smithers detachment Sunday and requested a peaceful resolution to the conflict. He said that officers are “put in an unfortunate situation” of enforcing a complex issue.

He was joined by federal Green Party MP Paul Manly, who arrived in Smithers Sunday and leaves today.