A former Canadian soldier who spearheaded a 2015 effort to deny Stephen Harper’s Conservative government re-election because of its treatment of veterans is once again urging voters to vote “ABC — anybody but Conservative.”

This time around, Tom Beaver says he is personally endorsing the Liberal government for meeting its key campaign promises to veterans. But the website for his group is called Veterans Against Conservatives.

“Yes, I am a Liberal. But In the past, I have also voted NDP and even Conservative once!” writes Beaver in a statement circulating via social media. “And yes, I have many good friends that support the NDP and Conservatives.... I trusted my life to them in the past, and I would again. I hope they would do the same. The ABC campaign is not telling anyone who to vote for. We are asking you not to vote Conservative.”

In a widely shared 2015 piece published in The Tyee, co-written with fellow veteran Ron Clarke, Beaver laid out his group’s grievances against the Harper government, including denying pensions to some disabled veterans, cutting their benefits and closing federal offices dealing with veterans’ issues.

The issue caused some flash-points on the election trail in 2015. And a Conservative veterans’ group formed to counter the ABC effort.

Four years later, Beaver says the current leader of the Conservatives, Andrew Scheer — and People’s Party of Canada leader Maxime Bernier — should be held accountable for their actions as members of the Harper government.

“Mr. Scheer and Mr. Bernier were standing right beside Mr. Harper when (he made) the most significant cuts off the backs of veterans since World War II,” he wrote.

Beaver says the Trudeau Liberals have completed “all obligations” they made to veterans in 2015. He checks off this list of items “completed”:

For one Liberal promise, ensuring surviving spouses of veterans receive appropriate benefits even if they were married after the age of 60, Beaver says there is “more work to be done.” 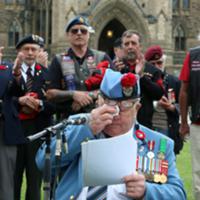 'You Have Forgotten': Seven Conservative Attacks on Canada's Veterans

The Scheer-led Conservatives have slammed the Liberals for not yet clearing the backlog of veterans’ benefits applications. “Talk is cheap,” Scheer said of Trudeau last month while unveiling his party’s veterans’ platform. “You have been betrayed. You deserve better.”

Beaver is not swayed. Of Scheer and the Conservatives, he says, “They promised everything they took away while they were in power.”

“As veterans,” he writes, “we answered the call from our country to serve. We expected, if we were fortunate enough to come home, that we would be given the support we need to survive. In too many cases, this has not happened.

“We believe that Canadians support their veterans and are also angered by the disrespect shown by the Conservative party.”