Prime Minister Justin Trudeau was nowhere to be seen among the dozens of world leaders and executives who on Monday made speeches to the United Nations about solving the climate emergency.

Technically that’s because Canada is in the midst of a federal election. But it’s unclear if the Trudeau government, which is a long way from meeting the climate targets it agreed to at the 2015 Paris talks, would have otherwise met the UN’s criteria. More than 50 countries were reportedly rejected from addressing the Climate Action Summit because the plans they presented weren’t ambitious enough.

Covering Climate Now is a worldwide network of over 250 publications, as well as many journalists and organizations, committed to covering the climate crisis with urgency and high journalistic standards. Members pledged coverage all through the week leading up to the United Nations Climate Action Summit in New York on Sept. 23. For more on who originated the initiative, who else belongs, and why The Tyee was early to join, click here.

Even with this criteria, however, the consensus among experts and observers was that world leaders failed to make commitments strong enough to achieve the 50 per cent reduction in greenhouse gas emissions that scientists calculate is necessary to give us a fighting chance of stabilizing the climate at 1.5 degrees Celsius.

Yet the event contained important lessons for Canada — and for whoever is elected to lead it after the October election. Here are three of the biggest takeaways.

Early in the day, 16-year-old Swedish climate change leader Greta Thunberg made one of the most fiery and emotional speeches of her life. “We are in the beginning of a mass extinction. And all you can talk about is money and fairy tales of eternal economic growth. How dare you?” she told the room with her voice on the edge of tears. “If you choose to fail us, I say we will never forgive you. We will not let you get away with this.”

These sentiments are shared by many of the millions of young people who skipped school on Friday — including 250,000 at the protest I attended in New York — to demand world leaders immediately transform our economy away from carbon-based industries.

Polling suggests many young Canadians are also sympathetic. A recent Abacus survey on the climate emergency found that nearly two-thirds of 18 to 29-year-olds support dramatically reducing or eliminating altogether our use of fossil fuels, the highest of any age group — although Canadians over 60 are not far behind.

2. The excuses for delaying climate progress are shrinking

Even though the UN Summit didn’t deliver commitments of a scale necessary to stave off global catastrophe, there were plenty of significant announcements. Sixty-five countries — including Switzerland, Costa Rica, Ethiopia and others across the development spectrum — are pledging to get bolder and stronger in their official greenhouse gas-fighting plans. Nearly 90 companies, which together have a market capitalization of over US $2.3 trillion, committed to actions that could align their carbon footprints with a pathway to 1.5 C.

Meanwhile Germany and six other jurisdictions bolstered the ranks of a global alliance to end global reliance on coal-fired electricity.

All of these developments contradict arguments often made by Canadian politicians and pundits for why dramatic action to fix climate change isn’t possible — that other countries emit way more than we do, that healing the environment is terrible for business and that major economies simply cannot function without fossil fuels.

3. The era of Big Oil’s dominance isn’t over — but it could be soon 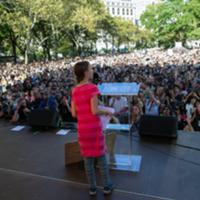 Greta Thunberg: ‘The People in Power Refuse to Listen… We Will Make Them Hear Us’

For all the talk of “sustainability,” “ambition” and a “green economy,” no leader at the Summit articulated a comprehensive plan for phasing out the oil and gas industry or blocking its vast political power. This, despite the fact that major producers have invested $50 billion in new climate-destroying projects in the last couple years. Much of that is in Canada: including Exxon’s $2.6-billion Aspen oil sands project and a $13-billion liquefied natural gas project from Shell.

Though oil and gas producers were not visible at the Summit, their influence is all over the UN climate negotiations process, whether in the failure of the Paris treaty to once mention fossil fuels or the overtures made to companies by the UN Secretary-General Antonio Guterres and his representatives.

Yet the rapid growth of electric vehicles and other alternatives to fossil fuels poses a growing economic threat to Big Oil. So far investors aren’t fleeing. But serious commitments from world leaders — such as a coordinated global effort to phase-out combustion engine vehicles — could rapidly change the financial calculus for investors in oil and gas, particularly in Canada’s high-cost oil sands.

“At some point there could be a race for the door,” Mark Campanale, the founder and executive director of the think tank Carbon Tracker Initiative, told me over the phone on Monday. “It could be that change is coming quickly.”