Two protesters were arrested Wednesday morning at a rally about the impact that the Kinder Morgan pipeline expansion might have on the survival of the southern resident killer whales off B.C.’s southwest coast.

The rally drew a crowd of 40 watched by RCMP who made the arrests.

Ruth Campbell and Noaa Edwards joined more than 210 people who have been arrested this year for blocking access to Kinder Morgan’s Westridge Marine Terminal in Burnaby to protest the Trans Mountain pipeline expansion project.

Campbell and Edwards face up to seven days in jail. Their courts appearances are scheduled for Aug. 14.

“Southern resident killer whales are doomed for extinction if Kinder Morgan goes through,” said Campbell, who is retired. “Somebody has to speak for these animals.”

Protect the Inlet group organized the “Tankers Kill Whales” rally as a response to the story of J35, a female orca that has been carrying her dead calf through the Salish Sea for more than a week.

The images of J35 have gained international attention and have sparked a conversation about the potential threats of the Kinder Morgan pipeline to the struggling population of orcas.

Jacqueline Lee-Tam, a volunteer with Protect the Inlet, hopes that J35’s story will convince more people to oppose the pipeline.

“Despite this issue dragging on, we will continue to show opposition to the pipeline because it violates environmental and Indigenous rights,” she said.

Grand Chief Stewart Phillip, president of the Union of B.C. Indian Chiefs, hopes this “watershed moment” will help raise more awareness about what he said were the inherent risks associated with the pipeline.

The fragile marine ecosystem of the Salish Sea cannot afford an oil spill, he said.

The orca is an iconic symbol of coastal and marine life and has inspired much environmental activism on the West Coast.

“The thought of the extinction of the southern resident killer whale is unthinkable,” he said.

The Trans Mountain expansion forecasts a substantial increase in the Port of Vancouver’s annual crude oil tanker traffic. Currently, the Port hosts up to 50 vessels per year. Once the expansion is complete, it will serve 37 vessels per month — 34 of the vessels measure 245 metres in length.

An increase in oil tanker activity will be “catastrophic” to the southern resident killer whale population, says Dr. Jason Colby, associate professor of environmental history at the University of Victoria and author of Orca: How We Came to Know and Love the Ocean’s Greatest Predator.

According to Fisheries and Oceans Canada, the greatest threats to southern resident orcas are the reduction in prey availability, contaminants, acoustic and physical disturbance and exposures to toxic spills.

The number of southern resident killer whales has fallen to an all-time low of 75 whales, and the species has been recognized as “endangered” by the Committee on the Status of Endangered Wildlife in Canada since 2001. 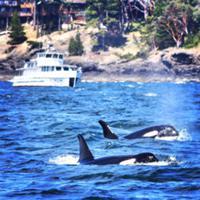 Colby says the plummeting orca population is correlated to the dwindling supply and increased difficulty of preying on Chinook salmon, which make up 90 per cent of a resident orca’s diet. Additionally, marine acoustics and marine pollution inhibit the ability of orcas to locate remaining food source.

Many critics will highlight the already existing high levels of marine traffic in the Vancouver area, said Colby. The proposed increase in vessels would only represent roughly 14 per cent of current marine traffic.

“This case is different because we are talking about adding large oil tanker traffic to the busy Salish Sea. The potential for boat strikes, the acoustic pollution, and the increased likelihood of oil spills are of major concern,” he said.

“It is important for people to understand that in addition to the dropping number of Chinook salmon, the Kinder Morgan pipeline is the most immediate and existential threat to the struggling southern resident killer whale population.”