Figures in a B.C. greenhouse gas inventory  released quietly before Christmas show emissions have risen for four of the last five years.

Previously the province released a full public report on emissions, including inventory methodology every two years, but in December the government released a spreadsheet simply listing emissions figures for the second year in a row. The spreadsheet was published without any formal announcement or news release. By law, the province is required to reduce emissions 80 per cent from 2007 levels by 2050. In 2008 the province created a benchmark within that reduction, committing to get to 33 per cent reductions by 2020.

But the new figures show B.C. is not on course to meet that 2020 target. Instead emissions are only 2.1 per cent lower than the baseline year of 2007 and are on the rise.

The government needs to take drastic steps if there is any hope of meeting targets designed to keep global warming below two degrees, Jens Wieting of Sierra Club B.C. told DeSmog Canada, adding it is distressing the emissions inventory was updated without a public announcement.

“Why is it an environmental organization that has to put out a press release telling the public this information is now available,” Wieting asked.

Wieting said robust reports are needed to help decision makers effectively work to reduce the province's emissions, adding this was the first time in 10 years the government has released only Excel files.   “We should be informed by more detailed not more superficial information,” he said. “What we have seen in B.C. for years is noble rhetoric about the need to confront climate change, but a lack of meaningful action.”

“We have not heard from the B.C. government how serious this is and that we are not close to meeting our reduction targets,” Wieting told DeSmog Canada.

A decade after B.C. committed to its 2020 target, the province is essentially in the same place, Wieting said.

The government is planning to introduce a legislated target of a 40 per cent reduction in emissions by 2030, a spokesperson from the Ministry of Environment and Climate Change Strategy told DeSmog Canada. The province will introduce targets and plans for the industry and transportation sectors, including helping emissions-intensive industries reduce emissions while remaining competitive.

“Underscoring these actions is the appointment of the new Climate Solutions and Clean Growth Advisory Council, which is advising government on how to achieve our climate objectives efficiently and effectively while growing our clean economy,” the spokesperson said in an emailed statement.

Sierra Club B.C. is calling for decisive changes in the way the province deals with greenhouse gas emissions, including a public inquiry into the impacts of hydraulic fracturing — often referred to as fracking — which annually releases 118,000 tonnes of methane, a greenhouse gas 84 times more potent than carbon dioxide.

The province has promised a review of fracking, a process used to extract natural gas, but a coalition of community, First Nations and environmental groups wants it broadened to a full public inquiry.

“If we increase fracking we can’t make any further progress,” said Wieting, who is concerned that Premier John Horgan is heading to Asia on a trade mission later this month without committing to delivering a clear message that new liquefied natural gas and other fossil fuel projects would compromise B.C.’s efforts to meet emissions targets.

“People are making changes in their lives. There are bike lanes and public transit, but all that will be overshadowed by new industrial development,” Wieting said. 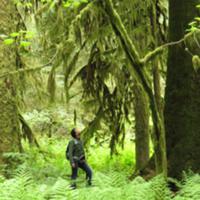 Preserve Old-Growth Forests to Keep Carbon Where It Belongs

B.C. has a history of considering projects, like the Pacific Northwest LNG facility, that would make it impossible to meet climate targets. The climate impacts of the Kinder Morgan Trans Mountain pipeline project were not considered by the provincial or federal governments during the project’s environmental assessment.

Sierra Club B.C. is recommending that all major industrial projects undergo a climate test, including a carbon footprint breakdown, as part of the environmental assessment process.

There should also be changes to the way in which the province releases emissions data, Wieting said.

Previously, a detailed report was released every second year, but, for the last two years, the information has come through a spreadsheet that no longer shows emissions related to logging. Emissions from slash burning — a process used to eliminate wood debris in logging operations — are shown as being “under review” and not available. Slash burning would have accounted for 13 per cent of B.C.’s total emissions in 2013, according to previous government inventories. That’s the equivalent of over 1.7 million cars on the road for one year.

However, despite their significance, forest emissions are not included in the official provincial count. A practical solution would be to protect old-growth tracts of forest that store large amounts of carbon while ending the practice of slash burning, Wieting said.