Hardly a day passes without news of unprecedented wildfires, hurricanes, and other climate related-disasters. In British Columbia alone, more than one million hectares of forests have burned so far this year — the highest number since records started. The carbon emissions from this year’s fires are so massive that the total annual greenhouse gas emissions of the province will be several times higher than in previous average years.

Failing to act on climate is no longer an option. Severe climate impacts are already here. Our governments have failed to take appropriate action, and we have little time left for the needed changes if we want a fighting chance to stabilize the climate before impacts worsen.

One of the most important recommendations made by climate scientists is to leave the vast majority of fossil fuel reserves untouched, labelling them “unburnable” carbon. In order to keep global warming to a minimum, we must apply the same strategic approach to carbon-rich forests and other natural carbon sinks to reduce land use related carbon emissions.

Just as we must set aside large fossil fuel reserves as “unburnable” carbon, we also have to map the world’s remaining carbon-rich, old-growth forests and protect ecosystems like the globally rare temperate rainforests in the Pacific Northwest as “unharvestable” carbon.

The damage inflicted on B.C.’s forests from the mountain pine beetle and wildfires highlights that not all forests are the same. B.C. Interior forest ecosystems with a certain level of natural disturbance from fire and insects, increasingly worsened by climate change, are now the hardest hit.

In contrast, B.C.’s old-growth coastal and Interior temperate rainforests contain ancient trees many hundreds of years old. These forests can store over 1,000 tonnes of carbon per hectare, one of the highest rates on earth. They’re like a carbon bank, accumulating carbon in soil, trees, and organic matter over millennia.

Shockingly, about half of the carbon stored in these ecosystems is lost due to clear-cut logging from exposed soils and large amounts of wood left behind. Destructive logging is often combined with slash burning, an egregious practice that releases millions of tonnes of greenhouse gases annually and must be phased out quickly. Reducing carbon emissions by protecting old-growth rainforest and phasing out slash burning will have immediate benefits for the climate.

Research increasingly shows that, contrary to industry claims, old trees store more carbon than young trees. A new study found that the older a tree, the better it absorbs carbon. Almost 70 per cent of the carbon stored in a tree is accumulated in the second half of its life. The new findings suggest that old trees store more carbon in proportion to their size. It makes no sense to cut down carbon-storing older trees at a time when scientists are madly trying to invent carbon-capture technology.

While old-growth rainforests are less vulnerable to climate impacts, global warming means they will not grow back the same. That’s why ecologists consider the remaining old-growth a non-renewable resource. The plants and animals that depend on these forests are already endangered and would disappear along with the old-growth.

Climate change is worsening fire and insect damage to many forests across the province. This means we have to work harder to protect ecosystems such as the old-growth rainforest that remain relatively safe from climate impacts but still face the risk of clear-cut logging.

In B.C., Vancouver Island is ground zero for the logging of endangered ancient rainforest. A recent Sierra Club BC analysis showed that between 1990 and 2015, Vancouver Island's old-growth declined by 30 per cent, three times faster than primary forest loss in tropical rainforests. Only about 10 per cent of the biggest trees remain standing. In the last few years, the annual old-growth logging rate was 9,000 hectares per year, or 25 hectares a day. 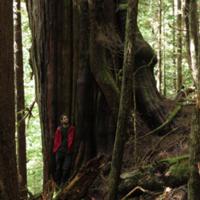 Sierra Club BC estimated the climate impact of one year of old-growth logging on Vancouver Island and found that it virtually eliminated progress made in reducing carbon emissions over the same time, releasing approximately three million tonnes of carbon dioxide into the atmosphere.

There are approximately 1.5 million hectares of unprotected old-growth forest on Vancouver IsIand and B.C.’s south coast. Within this area, there are 600,000 hectares of relatively productive stands (i.e. forests that grow taller trees), with significant carbon storage capacity. These forests store the equivalent of 13 times B.C.’s annual emissions, but a significant portion of these ancient rainforests could still be targeted for logging.

A new meaningful climate action plan for B.C. must therefore include a science-based plan to protect B.C.’s endangered old-growth rainforest as “unharvestable carbon.” New protected areas and conservation measures for Vancouver Island must respect First Nations rights and interests, enable a transition to sustainable second-growth forestry, support diverse economic activities such as tourism, and reduce carbon emissions. The Ahousaht Nation in Clayoquot Sound is leading the way in demonstrating alternatives to old-growth logging, with their land use vision that includes an end to industrial logging in their territory.

Sierra Club BC stands ready, together with other environmental organizations, to work with the new B.C. government, First Nations, and the forestry sector to increase protection of endangered old-growth rainforest. There is a wide range of options to strengthen forestry practices and forest management to create jobs and produce climate-friendly wood products. But this summer’s wildfires and hurricanes are a stark reminder that we can no longer take for granted our forests and their critical services for our climate, clean air and water, wildlife, and tourism. The time to save our endangered old-growth rainforest and its unharvestable carbon is now, not tomorrow.