A Liberal government plan to hold public consultations on national security including changes to Bill C-51 is presented in a way that is biased in favour of police and other authorities, warns a privacy watchdog.

The controversial bill, also known as the Anti-Terrorism Act, has civil liberties groups concerned over how vaguely some aspects of the bill are worded and how easily it allows law enforcement to breach the privacy of citizens.

Brought in by the former Conservative government in 2015, critics also said the bill criminalizes non-violent free speech and creates a chill on freedom of expression.

Concern about oversight of the Canadian Security Intelligence Service under the bill was also raised.

Ottawa said the consultations will “inform” any changes to national security policy while safeguarding Charter rights. The Liberals promised to repeal “problematic” parts of C-51 during the election campaign.

But David Christopher of the Internet rights group OpenMedia said the wording of the consultation’s backgrounder is biased in favour of law enforcement, for example often detailing how current legislation impedes law enforcement.

“Much of the explanatory information that is presented is really one-sided,” Christopher said. “We have all this background information written in a way that seems to address police concerns rather than what the public [is] most worried about.”

He said the backgrounder’s definition of encryption is written in a way that would mesh with arguments that police chiefs have made in wanting a law that could force people to hand over their passwords.

Christopher also worries about the document’s take on intercepting communications. 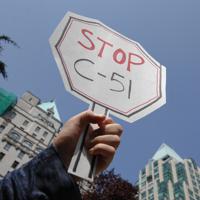 “With legal authorization, the ability to intercept communications is a valuable tool in national security and criminal investigations,” reads the backgrounder. “However, some communications providers are unable to comply with court orders to cooperate because they do not maintain the technical capability to do so.”

The sentence seems to be trying to open up a door to forcing telecom companies to build surveillance capabilities into their networks, Christopher said.

Bill C-51 came into effect more than one year ago, and Christopher said because of the opaque nature of Canada’s spy agencies and holes in the legislation, just how much authorities are using it to invade Canadians’ privacy is unknown.

He said while his organization is happy the consultation has finally been launched, OpenMedia will be approaching the federal government to ask it to change some of the wording in the backgrounder.