The broken promise of cleaner water could be the biggest missed legacy of the Rio Olympics, says a Portland political science professor who has spent months there researching preparations for the Games.

“If you go over to Guanabara Bay [the sailing venue] and take a big whiff, it smells awful,” says Jules Boykoff of Pacific University, who is launching his book on the Rio Games tonight in Vancouver. “It is putrid, the stench is hard to deal with.”

Water bottles, broken toys, animal carcasses and punctured soccer balls strangle the mangroves that are supposed to provide a natural filter in the giant bay where most of Rio de Janeiro’s untreated sewage ends up.

Rio’s successful 2009 bid included a pledge for sewage treatment in the city that hosted the United Nations’ Earth Summit in 1992 and a promise to cut pollution in the bay by 80 per cent.

Boykoff’s third book on the Olympics, Power Games: A Political History of the Olympics, traces political trends from the 1896 launch of the modern Olympics in Athens through Hitler’s 1936 Berlin Games and into the corporate era introduced with the 1984 Los Angeles Games.

He says the Guanabara Bay cesspool is a symptom of Rio’s double-whammy of political and economic crises.

Rio beat out Chicago for the Games in 2009 when oil prices were healthy and Brazil was a star among developing economies. The drop in commodities prices thrust Brazil into its worst recession since the 1930s. President Dilma Rousseff was suspended amid impeachment proceedings over allegations she attempted to obstruct investigation of a kickback scandal at the state oil company Petrobras and presented false budget numbers in advance of the 2014 elections. Fears over the mosquito-borne Zika virus only made matters worse.

“In a weird way, I’d say the Olympic organizers are among the very few beneficiaries of this double whammy crisis in the sense that, typically, all the more media attention is placed on the machinations of the Games organizing committee as the Games approach,” says Boykoff. “In the last few months they got a free pass.”

That is starting to change as the global media arrives in the city.

City, state and federal officials are still pointing fingers at each other about budget overruns and security preparations, he says. “They definitely have not been working in concert,” he says, point to “ a jurisdictional shimmy to avoid accountability.”

“The IOC does the exact same thing, they blame it all on Rio,” Boykoff adds.

The Rio Games have been a story of overspending, false promises, militarizing the city and displacement of vulnerable people, Boykoff says, but it is captured by the International Olympic Committee’s process for bidding for and hosting the event.

Host cities with dreams of global recognition and better infrastructure are at risk if the boom-bust cycles of capitalism swing against them after the Games are awarded.

The IOC has suggested changes to make hosting the Games less onerous under its Agenda 2020 manifesto, but change isn’t happening fast enough. “Fewer cities are game for the Games,” Boykoff says.

Beijing beat Almaty (in Kazakhstan), the only other city on the ballot, to win the 2022 Winter Games when the IOC voted last summer.

And earlier this year, when the Canadian Olympic Committee asked seven cities if any were interested in bidding for Winter 2026 or Summer 2028 Games, only Calgary expressed interest in the former. Vancouver, the Winter 2010 host, is wrestling with a post-Games housing affordability crisis.

Boykoff says the trend is toward Games’ bids from countries “that are more authoritarian in nature.” 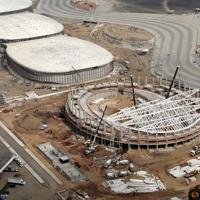 “They can get the job done no matter what the economic situation and they can also make sure there’s no dissent plaguing the big moment,” he says. “If you give the Olympics to more putative democracies, those countries have to become more militarized.”

What can the world expect from Rio?

“You’re going to see some amazing athletes, but we don’t need to check in our brains at the door to watch the Olympics,” he says. “We can raise really big questions.”

Boykoff says both Brazilian progressives and conservatives have been asking questions about corruption and misspending, particularly in the last three years. He predicts more protests about cuts to public services during the Games.