Reza Famili is a 38-year-old visual artist. His evocative paintings have sold in galleries abroad. He speaks many languages and is an experienced cook. 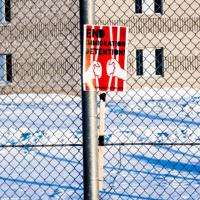 Famili is also a Convention refugee, meaning he faces a "well-founded fear of persecution" under UN definitions. He had searched for a home for 17 years until Canada granted him asylum Nov. 26. His quest began in 1998 when he fled his homeland, Iran, and journeyed by foot through Syria, Turkey, Bulgaria, Serbia, Bosnia, Croatia, Slovenia and Italy.

I know all this because Famili stayed in my bachelor apartment on and off for two weeks this month.

Here's how our unexpected friendship came to be: Last month I added my name to a list of Vancouverites able to offer short-term housing to refugees. On Dec. 1, I received a call from Inland Refugee Society of BC seeking emergency lodging for a client just released in Vancouver. He'd spent nearly 11 months in Canada Border Services Agency custody, he said, despite having committed no crimes, nor having faced any charges.

Famili is one of the nearly 25,000 asylum-seekers accepted by Canada annually. As The Tyee has previously reported, border authorities imprison thousands of them at any given time while their claims are processed, often in provincial prisons.

This month, Famili and I got to know each other. He's since found a longer-term home but is now part of my social circle: he braved a poetry and nonfiction reading, attended my rock choir's holiday concert, and he will join my family for Christmas dinner.

And just as I've heard from other refugee-involved Canadians for this Tyee series, my own life has been enriched from the experience. Here is our conversation about what we've both learned.

David P. Ball: My series is about Canadians getting to know refugees and how it affects them -- how it changes the lives of both.

Reza Famili: Everybody who's new here, or in any city or country, needs somebody to be helpful somehow, even with navigating the system, getting around or housing.

Because some things must seem pretty weird here.

I don't know... I think it's weird to put those paper transit tickets into the slots on the bus.

Yeah. Since the first time I got to the bus, I've had no idea how to put my ticket in. Every single driver has to explain to me, "Just take your time." They're nice guys.

Could you tell our readers about yourself and how you came to be in Vancouver?

I didn't really have a plan to come to Canada. I'd always heard about Canada as a good country with good people. For a long period living in the States with no status, getting no answer from immigration after nine years, it just made me depressed and pressured. I had no documentation or passport.

I had a really tough time in the past. I've been going country to country, homeless because I didn't have identity for any country for so many years. Finally, it came into my head to try one more time. I headed north and ended up in Vancouver. I turned myself in and said, "I want to be a refugee here." From day one, they took me to an immigration facility, to North Fraser [Pretrial Centre] for a couple days -- where I was with a lot of criminals -- then to the immigration unit of the Fraser Regional Correctional Centre. I sat there waiting for my court hearing for almost nine or 10 months just to see a judge.

I have no criminal record. The only reason CBSA held me in there wasn't because they needed to identify me -- they were already satisfied with my identity from day one -- but because I didn't have any family members or friends to bail me out.

When the judge finally saw me, he said, "I already know I cannot send you back to Iran, because of your status, your religion and your politics." I had to wait another 10 days; by then it had already been almost 11 months. One day, they brought me to CBSA [offices in downtown Vancouver] and said, "Congratulations." I said, "For what?" They said, "You got accepted as a refugee." Then they released me.

So you got out suddenly; what was next?

I thought they'd give me housing first and take me someplace. I'd heard there were small rooms with basic necessities for refugees. I asked, "Where should I go?" They said we don't help refugees, we're CBSA. They gave me a piece of paper with the address of Belkin House [Salvation Army homeless shelter]. I walked there, but there weren't any beds.

I was confused. I didn't know why I'm here. And now I have a lot of problems: I was released onto the street with no Canadian money. The gentleman at Belkin House told me about Inland Refugee Society, and said they could help find a place for me. I went to Inland, told them I needed a place -- and they found you.

I had seen a bunch of posts of Facebook about how refugees needed housing. My partner was doing some hampers and fundraising for refugee families, and I thought, "Why not just get on the list?" I didn't know if I had enough room as my place is very small. When Inland called, I wasn't expecting they'd need a place that night. I thought it might be, "In a month, we have a refugee coming"...

You'd just signed up that day?

About two weeks before, but I didn't expect a call for an emergency situation. I thought I could figure it out, maybe stay with my partner for a short time. But when I heard you'd be in a homeless shelter, I thought, "My place is really messy, but I guess I have a bed here and another place to stay."

That was actually really helpful. You have no idea -- when you just get released after 11 months in [detention], you don't know where to go. You're new here. Everything is new. You don't know the streets.

Inland told me you were really cool -- you are an artist, you speak something like six languages, you were close to my age -- and I thought you sounded really interesting. I remember when you arrived, I realized I didn't have any food so I got some hummus and olives. But you weren't very hungry. You seemed very happy with a beer, though!

[Laughs] After almost a year, that felt like the first beer I'd ever had in my life!

You said, "I don't need to eat, I just want to enjoy this beer." That's what I would want! I was happy to hang out with you, but didn't want to ask too much about your history. I was worried you'd think I was grilling you for information.

Not at all. I have a long life story, I would love to share it.

I didn't know what to expect, because I haven't done something like this before. Gradually over the weeks, you hung out with my friends and even came to some events like my friend's nonfiction reading, my choir concert, a potluck. What was your impression?

Everything was new for me. I always enjoy meeting new people. I'm very flexible.

What's one thing you've learned from this whole experience since you got your refugee status about your time here?

I learned that in this system, nobody is responsible for answering housing for refugees. And releasing a refugee or family -- what if they couldn't speak any English, where would that family go? They'd have to sleep in the street. Who is responsible for that? Inland Refugee Society is doing so much to help refugees. The Red Cross and other agencies are sending so many people to them, but aren't paying them for it. They're just sitting there all day helping people.

The biggest thing I've learned from this was remembering that when I traveled around the world, people were always inviting me into their houses in India, Lebanon, Syria, Turkey and Thailand. I thought, "Why don't I do that in Canada?" But then I'd always think, "I don't really know them" or "I'm too busy." I realized this was a chance to treat people like I was treated. It turned out to be really fun and I got a new friend out of it. I never thought that would happen.

I like meeting people. I don't go out to bars or clubbing, and I'd rather have a nice dinner by myself -- but if I find good people around, why not hang out with them? I didn't know where to go, it was very tough for me, but I finally got settled.

I came home one day, and there you were in my kitchen with all my food and condiments on the ground: you were cleaning the shelves of my fridge. What were you thinking?

I'm a very clean person. I've been living for so many years by myself. It makes me really organized. When I leave a place, I like it to be clean and organized.

I'm the worst. As a writer, I'm just so busy and always on the move. I don't have much time to clean and I'm also lazy about my house. I worried you'd think I'm such a slob!

No! It seemed like the least I could do after you shared your apartment with an unknown guy. I thought I'd help you out just a little bit.

That was really nice. I couldn't believe you were doing it. It had been so stressful for me to even think about cleaning my fridge! I was really touched by that.

Actually, in Persian we say, "One hand has no sound," [Claps hands] "but two hands can clap." It means one hand can't help itself -- you're busy working and don't have time, but two people's hands work better together.

Interview edited for clarity and length.