Thousands of immigrants are detained at any given time in Canada, some for nearly a decade and at great cost to their mental health, a new University of Toronto law faculty report has found. 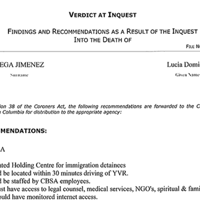 In addition, some detainees interviewed for the report describe being treated as "less than human," "animals" and "garbage" while in Canada Border Services Agency custody.

The report, titled "We Have No Rights," comes one week after an agitated and restrained 39-year-old man died in CBSA custody in Peterborough, Ont. The agency has not revealed who he was or how he died.

It also comes eight months after a B.C. coroner's inquest called for the agency to make mental health reforms and be brought under independent civilian oversight, following the suicide of Mexican detainee Lucia Vega Jimenez.

Detention is commonly used for deportees deemed to be an escape risk pending their deportation hearings, or for those whom authorities can't identify. Nearly one-third of CBSA detentions are contracted to provincial prisons, and the remainder are held in CBSA-run immigration holding centres in Canada's major urban centres.

The researchers documented cases of post-traumatic stress disorder, depression, bipolar disorder, schizophrenia and suicidal thoughts among detainees, conditions they found were inflamed when detainees did not know when or if they would be released.

Some detainees have been held in provincial jails -- normally reserved for criminals facing less than two years' jail time -- for nearly a decade, they found.

"Ten years is a very serious offence. That's manslaughter in Canada," said the program's executive director Renu Mandhane in a phone interview. "This is a legal black hole."

The indefinite nature of detention aggravates existing mental health issues, she said, and may create new ones.

The report uncovered what Mandhane called "quite startling findings" of worsened mental disorders "even after a relatively short stay in detention in medium-security conditions."

'It's out of control': former CBSA manager

Canada Border Services Agency did not respond to requests for comment sent June 15, but in a statement following the Vega Jimenez inquest said that its detainees' health and safety "is of paramount concern" and that the agency adheres to Canadian law and international standards.

"The CBSA is committed to ensuring the health and safety of those in our care, and as such we are continuously reviewing our internal detention operations," it said.

The fact that detentions have increased over the past decade, while deportations have been cut in half, concerns Reg Williams, a former senior manager of CBSA's Greater Toronto Enforcement Centre.

"It's a red flag. It's out of control," Williams said in a phone interview. "If you're going to detain somebody, you have to make a diligent effort at removal. You can't lock them up forever until you get around to it."

Williams, who worked in immigration enforcement for 23 years and retired in 2013, testified at the Vega Jimenez inquest. He said he supports that jury's call for an oversight organization "to investigate critical incidents in CBSA custody" as well as the need for an independent ombudsperson for complaints.

One recommendation, Mandhane said, is for the CBSA to adopt a "presumptive period." After passing a mandated series of detention reviews, a detainee would be released automatically after 90 days unless border services can prove they are a danger or flight risk.

Williams said the situation has reached a crisis point.

"People have taken their own life or harmed themselves," he said. "It's time for a serious overhaul, and an oversight body."