In a noisy kitchen in New Westminster, B.C., two children stir a large bowl of batter at a cluttered table. They help each other mix in sugar, chocolate chips, eggs and baking powder, briefly bickering over how to share the measurement of 2.5 cups of flour. 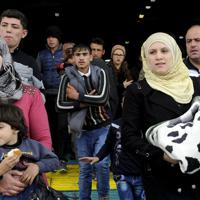 "We are making some cookies," boasts five-year-old Goodluck Edom. A Biafran refugee from Nigeria's southern Imo state, Goodluck arrived in Canada on Oct. 11 with his parents and three siblings.

Two years older, Rebecca Russell Black rushes to lift a large container up high with both hands to pour flour into a small cup. The two agree to each measure half.

"Be careful!" Goodluck tells her as the white powder tumbles over the top and across the tabletop. On his turn, he carefully contains the flour to the cup while Rebecca watches: "Not too much!" she warns.

Observing nearby is Rebecca's mother, Maya Russell, one of the home's owners. "I knew this would be interesting for our kids," she says as the kids attempt to keep the powdery mess to a minimum. "They are having a lot of fun together."

Along with her three children and husband, David Black, Russell is voluntarily hosting the six-member Edom family in their 3,000-square-foot home. The Edoms moved in on Nov. 29.

Like many Canadians, Russell and Black had watched the Syrian refugee crisis unfold daily on the news and wanted to help. They considered privately sponsoring a family, but didn't feel they had the necessary finances or volunteer network.

"We really couldn't wait, either," says Black, who is also the president of MoveUP (formerly the Canadian Office and Professional Employees union local 378). "The need was so great."

Then the couple saw a call online for temporary housing for asylum-seekers. "We can do that. We have space," Russell recalls thinking. "We have a big house, and we've always said we're over-housed."

They put in an offer, and a worker from the Inland Refugee Society soon replied. Despite the imminent influx of thousands of Syrians into the region, another family needed urgent assistance.

Newly arrived from Nigeria, the Edoms were crammed into a single room after they could no longer pay their hotel bills. The father, 40-year-old Emeka Edom, was sleeping on the cold floor outside the room so his wife Cynthia, 29, and children could have more space.

"I couldn't imagine six people living in a one-bedroom place," Black says. He felt compelled to help them.

Russell and Black talked to their children -- two seven-year-olds and a nine-year-old -- whose only concern was whether they'd still be able to watch Harry Potter and My Little Pony on TV.

The parents wanted their kids to understand who refugees are without frightening them, and to be sure they were prepared to share their toys with the newcomers -- three boys aged one, three and five; and their sister, age eight. The kids agreed.

Emeka Edom remembers the day he arrived at the Vancouver airport, one week after leaving his home country and transiting through the United States and Toronto.

"I never, ever imagined I would actually come here," he says. "Or if I did, it would just be me. So for me to be here with my family, I asked, 'Is this really happening?!'"

After arriving, Edom says he removed his shoes and put his feet directly onto the ground at YVR. "This is the land of Canada," he thought. "Canada, here I come!"

But the money the family had saved before the journey didn't last as long as they'd hoped. Worse, they didn't know anyone who could help them with some short-term cash or lodging.

"We didn't have anywhere else to go," Edom says. "I wasn't happy with myself for what [my family] was going through. In my mind, I felt like I was punishing them by bringing them here."

The Edoms weren't on their own for long. A local Anglican priest helped connect them with other Nigerian families. They discovered, to their delight, an African grocery store. Then they met staff at Inland Refugee Society, one of B.C.'s most established refugee settlement non-profits. The group put out the call for short-term housing that Russell and Black heeded.

Last week, having moved into the Canadian family's attic -- formerly a play area and occasional guest room -- the Edom family filed their application for asylum in Canada, a process that should take six months.

Moving in, Emeka Edom's biggest worry was that his children would annoy the home's residents with loud playing, yelling and running. He cautioned his kids to stay upstairs and respect the residents' privacy and quiet.

"I was shushing our kids," he says, cautious about letting all seven kids play together in case they got into trouble. Russell assured him her own children were generally boisterous and that they shouldn't worry about the noise.

The next morning, one of Russell's daughters began loudly pounding on the living room piano at 7 a.m. before school, startling the Edoms awake upstairs.

"It was very loud, I must admit!" Edom says with a laugh at what he imagined was some kind of daily before-school tradition in Canada. "As time passed, when Maya didn't complain, we thought, 'OK, let's give them their freedom!' That gave me a big relief. I came to the right place."For Cynthia Edom, seeing Russell and Black continuing their daily lives as normal, kids play included, "made us feel like everything was normal."

Unbeknownst to the guests, however, on the lower floors the host parents also worried about disruptive noise, and attempted (without success) to keep their kids placid.

"I've given up on that," Russell chuckles. "Their kids are actually much better behaved than ours. Now we just keep things as normal as possible. If we're being too careful all the time, it's not going to last... We want these guys to be welcome to stay as long as possible."

One thing Russell has learned in her life is that hospitality for people like the Edoms is rarely unreturned. Not only have the Edoms cooked their hosts meals of goat soup, yams and rice, but there have been life lessons for everyone involved.

That's no surprise to Russell. In the 1970s, when she was five, her parents sponsored the Vuongs, a family of 11 refugees from Vietnam fleeing the war there. Similar in magnitude to today's Syrian crisis, many fled on perilous boat journeys.

Also similar three decades ago was many Canadians' "strong urge" to help the refugees, Russell says. The Vuongs' two eldest daughters lived in her family home for a year.

Russell and other neighbourhood children loved to play at the refugee parents' house, which they nicknamed "Vuongland." More than just a new batch of friends to play with, the stories the Vuongs recounted of their high-stakes exodus from war-torn Vietnam stuck with Russell: being attacked by pirates at sea, and having to hide their only valuables in their mouths.

"We certainly learned about what we take for granted in Canada, and the pretty harsh reality of what some people risk to come here," Russell says.

In the decades since, Russell's parents have continued to be involved in the Vuong family's lives. "They still get visits from their grandchildren now," she says, to hear about marriages and engagements.

Cynthia Edom understands that feeling perfectly. Of her hosts, she says: "They look at us as their own family. They're in our lives now... I don't think my kids will ever forget this time when they're older. They'll always remember. And when they get married, they'll always come back to this family."

Her husband Emeka beams at that. "What I've learned myself is that anybody can do this," he says. "I don't think I grew up with that kind of mentality to help. In Nigeria, there were people displaced from north to south by [extremist group] Boko Haram. Maybe we could have taken in a couple families in Nigeria to assist them. But we didn't think it was necessary for us to do; we thought that was up to the government or organizations.

"How did this family decide to do this?" he asks himself. "I looked at myself and what I have to offer. I started thinking, 'Could it be this is the way I want to actually live life?'... This is how we should all live."

It's a "better way" of living, Cynthia agrees.

'We may do it again'

Asked what he's learned about hosting such a large refugee family, Black admits he was at first "a little afraid" of making such a big commitment. But after only two weeks, he says he's "very glad" his family was willing to take the leap.

Once the Edoms get their own home, Black and Russell plan to take some time for themselves. But already they're talking about hosting other refugee families in the future.

"It's been easier than I feared," he says. "It hasn't been as hard because the [Edoms have] been so accommodating, but also because of all the supports we've had from friends, family and neighbours."

Those supports include what Cynthia Edom describes as a bewildering and continuous procession of strangers bearing gifts for her family from morning to night."

Our family's been in Canada for generations," Black says, "but we know that Canada is what it is because people have come here from other parts of the world, including our families. I'm so proud to have Cynthia and Emeka here, because I know they and their kids will help make Canada great, too."

As the adults' conversation concludes, Goodluck and Rebecca carry out a tray of steaming chocolate chip cookies that have just finished baking. They look to the assembled adults, proud of their work.

"Right out of the oven!" Rebecca exclaims. One by one, hands reach in to sample the children's offering. Fruits of a friendship, newly baked.