The Musqueam Indian Band will get the lion's share of lease revenue from Paragon Gaming's $600-million Parq casino and hotel complex beside BC Place Stadium for the first three years, according to a quiet deal cut with B.C. Pavilion Corporation. 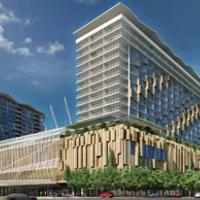 The Crown corporation's latest annual report -- released in July with public accounts -- mentioned the agreement related to the development of the casino, expected to open in late 2016. But it omitted both financial terms and the name of the First Nation.

"This agreement has no impact on the March 31, 2015 Financial Statements but will entail sharing of lease revenues for three years upon commencement of receiving lease revenues," said the report.

Stadium spokesman Duncan Blomfield confirmed the deal is with Musqueam.

That means PavCo will get $500,000 in lease payments from Paragon before 2020. When it was originally announced in March 2010 by then-premier Gordon Campbell, the development was supposed to earn PavCo $6 million a year in lease revenue for 70 years to help pay for the stadium's $514-million renovation.

But that was the year before Vancouver city council voted against Paragon's bid to put 1,500 slot machines and 150 tables in the new development, allowing it only to move the existing 500-slot, 75-table licence from Edgewater Casino at the Plaza of Nations. The Las Vegas company convinced PavCo to cut lease payments in half.

Musqueam Chief Wayne Sparrow said the deal with PavCo was done in 2013. He said Musqueam exercised its rights under a Nov. 2004 Supreme Court of Canada decision that said governments must consult and accommodate First Nations in decisions that may affect them. Though the 1,368-member band's reserve is in southwest Vancouver, downtown Vancouver is within Musqueam's traditional territory and land claim. The duty to consult and accommodate extends to the lease or sale of Crown lands.

Sparrow said Musqueam is still talking to Paragon about the installation of First Nations art in the complex and jobs for Musqueam members. The agreement could also be expanded.

"Originally, we talked about having one lump payment, but it was negotiated where it would be three payments," he said. "If there is any future negotiations with a longer-term lease or to sell the land, they would come back and have consultation with the Musqueam. That's what we agreed upon."

While the BC Place deal is a unique, short-term windfall for the Musqueam, it isn't so for PavCo, the money-losing stadium operator that has paid $2.55 million so far on a $150-million government loan for the renovation due in 2049. In 2012, the B.C. government nixed Telus's $40-million contract to rename the stadium Telus Park, instead paying the telecom $15.2 million for the wifi network and video screens it bought and installed.

Work began on Parq last summer and accelerated after the civic election in November. It will be the second major casino involving Musqueam.

In Nov. 2007, Musqueam settled three court cases with the provincial government for $20.3 million in cash and ownership of the land under B.C.'s biggest casino, River Rock Casino Resort, plus the University Golf Course and 22.3 hectares of Pacific Spirit Regional Park.

Last year, the First Nation became part owners of the Liquor Distribution Branch warehouse land in East Vancouver and Willingdon lands. The Aquilini Investment Group and Squamish and Tsleil-Waututh nations were also involved in the transactions.

Expanding the land portfolio and increasing revenue away from their largest reserve in southwest Vancouver has proven to be a more lucrative pursuit for Musqueam than the glacial B.C. Treaty Commission process. It is among 44 First Nations halfway through the six-stage negotiations, but its last major milestone was the April 2005 signing of a framework agreement.

''If there are First Nations that don't want to have treaties,'' Campbell said in a 2008 interview, ''then we'll work to build positive relationships in other ways. Treaties are not the only answer.''