Over a hundred prominent scientists in the U.S., Canada, Australia and Britain have called for a moratorium on any new projects to develop the Canadian oilsands, "unless consistent with an implemented plan to rapidly reduce carbon pollution, safeguard biodiversity, protect human health, and respect treaty rights." 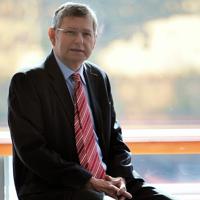 If Oilsands Are No Longer Profitable, What Next?

In announcing their "consensus" at a press conference on Wednesday morning, the scientists pointed out that investment in further development would "double down, even quadruple down" Canada's commitment to an unsustainable energy source, leaving a "legacy for generations."

The scientists listed 10 reasons for a moratorium, which can also be found on their website OilSandsMoratorium.org. The statement concludes: "We believe the time has come for scientists to speak out about the magnitude and importance of the oil sands issue and to step forward as participants in an informed and international public dialogue. Working together, we can solve the energy problems before us. It is not too late, but the time to act is now."

The signatories represent a broad range of physical, environmental, and social sciences, with substantial numbers from western Canadian institutions including Simon Fraser University and the University of Calgary. Among them are Thomas Homer-Dixon, Mark Jaccard, Michael Byers, David W. Schindler, and Andrew Weaver.

In a telephone news conference announcing the statement on Wednesday morning, the main signatories explained its origins and purpose. Dr. Wendy Palen of Simon Fraser University said the consensus emerged in a paper the signatories published in Nature Magazine in 2014. This led to a synthesis of the environmental, economic, and social-justice aspects of increasing development.

An argument for Plan B

Dr. Thomas Homer-Dixon of the University of Toronto said at the news conference that "The longer we wait, the worse the eventual costs will be." Canada has two options, he said: to step back from development or to "go rogue and dig ourselves deeper into our hole." He said the consensus was not an attack on Alberta, but an argument for a Plan B.

Dr. Mark Jaccard of Simon Fraser said: "Research shows we shouldn't be doubling down, even quadrupling down our investment" as fossil fuels become high-cost energy sources.

Dr. Ken Lertzman of Simon Fraser argued that "Social justice is another reason to support the moratorium." While indigenous people are most at risk from development, he said, "Consultation with them has been neglected in oil development."

In the course of the conference, the signatories answered a number of questions, pointing out that to keep carbon dioxide below 450 parts per million, further development of the oilsands beyond current production of two million barrels per day is not possible.

Dr. Thomas Sisk of Northern Arizona University warned that new energy pipelines would have "long and large impacts." David Schindler, an expert in boreal ecosystems at the University of Alberta, pointed out that such pipelines would cross hundreds of rivers and streams, "and you can't remove oil from under ice." He also noted that ice breakup in the spring poses a "formidable threat" to pipelines, and the impact of pipelines on threatened caribou populations is uncertain.

At the end of the conference, Homer-Dixon suggested that Alberta's "Plan B" might involve becoming a world leader in ultra-deep geothermal energy: "Albertans are good at drilling holes." The province could become a world leader in the selling of advanced drilling technology, he said. He also suggested possibilities in creating biodiesel from canola.