About a year ago, one of Canada's most influential money managers made a prediction that few people in the oil sands took very seriously. Leo de Bever warned the price of oil would drop from a booming $100 per barrel to a disastrous $70 or less. "People thought I was nuts," de Bever told The Tyee in a phone interview from Edmonton. But oil this past month dropped below $60, and is expected to fall further into 2015. It could end up costing Canada over $13 billion in lost revenues, according to a recent CIBC report. 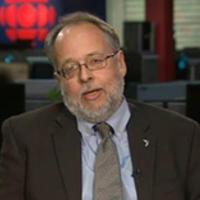 The Netherlands-born de Bever is highly respected in Canadian financial circles. He's soon retiring as CEO of AIMco, an Alberta pension fund that oversees assets worth $75 billion. Though oil prices are cyclical and may recover by the end of 2015, de Bever thinks they're only one of many threats facing the oil sands. In 20 to 30 years, he argues, the market challenge to gasoline and diesel posed by electric cars, clean energy, alternative fuels and climate action could go from nascent to formidable.

Which is why de Bever thinks today's oil price slump may foreshadow a not so distant future where Alberta is the source for a product nobody wants. It's a given for de Bever that oil sands firms need to make their operations as green as possible. But the longer-term solution he floated during a Tyee Q&A may surprise you. Read on to learn why he thinks the oil sands could shift from a source of road fuels to chemicals, and how come the most creative ideas often start out sounding crazy.

On the threats to Canada's oil sands that aren't going away:

"New heavy oil deposits [like in North Dakota] have been found closer to market. So Alberta's at the wrong end of the continent. It's got transportation issues and the cost of extraction is among the highest in the world... The oil and gas industry made a good living punching holes, finding reserves, aggregating that and selling them to a bigger company and doing it over again. That was because [high oil] prices helped them. Now you're faced with the reality that between conservation, alternative fuels, electric cars and lower oil prices, you're going to be backed into a corner."

On how Canada can prosper even as fossil fuel demand wanes:

"I'm thinking 30,000 feet now. But if we start from the premise that existing markets [for gasoline and diesel] might not be around [in 20 or 30 years], it's time to figure out what markets will still be around. My guess is chemical markets will be the place to go... Petrochemicals are the building blocks of plastics. Almost every industrial chemical tends to have a hydrocarbon base... If your diesel market at some point starts to peter out, there are very high-value-added chemicals that are light, they're easy to ship and so the disadvantage of a long pipeline or rail line disappears."

On why moving from road fuel to plastic isn't actually that weird:

"It's certainly true that the oil industry in many countries is a base for the chemical industry... The Dutch chemical company DSM got going as an offshoot of the coal industry, so this is not a brand new idea. I just feel we should think a little bit harder [about the future] because when oil went from $20 to $100 it was easy to make money. But how do you make money when the price is likely to stay somewhere in the $70 range? Maybe this is the diversification Alberta has been looking for, how to move from pure energy production to producing higher value chemicals."

On the reason that such a shift could be good for the climate:

"That's one of the implications... If you go after the environmental angle [on the oil sands], we can cut the emissions at the production stage, and you can probably do something on the pipeline stage because there's some methane leakage, but that doesn't take care of the bulk of emissions [an estimated 70 to 80 percent] once you finally start burning [the gasoline or diesel in a vehicle engine]."

On why we can't afford to wait 20 years to rethink the oil sands:

"When you look at the history of innovation, it usually takes close to a generation for a really dramatic shift in technology to be implemented... [And] the development cycle for energy technology tends to be one of the longest of any sector in the economy... It took 40 years for oil sands technology to really hit its stride.

"Technological change is accelerating right now... You sort of see Moore's law [of exponential growth] happening with fuel cells and wind turbines. With solar the cost is cut in half every three years. And you see that kind of thing happening everywhere... We have to do in five years what would normally take 20."

On why creative ideas often seem crazy until they suddenly aren't:

"I started talking about $70 a barrel oil about a year ago and people thought I was nuts. People still haven't internalized the fact that oil may not go back to $100. And if that's the case, then let's accelerate the adoption of new technologies... If we don't think differently from what the mainstream is thinking, then we're going to keep on doing what we've been doing. The history of innovation is that the big changes come from looking at the same problem from a radically different angle, and it's amazing what you can do when you do that... There's much more possible than we realize."

[Editor's note: de Bever's responses have been edited for length and clarity.]