A novel financial experiment that's pumped an estimated $50 million into communities across Nova Scotia is about to go bi-coastal. In September, the Vancouver Island Community Investment Co-operative held an inaugural meeting to elect a board of directors. Next year, it hopes to issue British Columbia's very first "Community Investment Bonds." 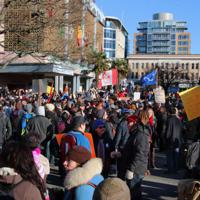 If all goes as the new co-op hopes -- and that's not yet certain -- the money raised will begin to address a growing shortage of affordable housing in the B.C. capital region.

"People are having a really tough time," says Rupert Downing, the cheerleading executive director of the Community Social Planning Council of Greater Victoria, which is behind the idea.

How the Community Investment Fund Works

One way the Vancouver Island Community Investment Co-operative raises money is by selling RRSP-qualifying shares to local investors, though it also accepts other capital investments.

People building their RRSP savings can direct a portion of their yearly contribution into the co-operative's fund. (Nova Scotia even offers a bonus 35 per cent provincial tax credit for RRSP investments in community bonds, something the co-op hopes to see in B.C.).

An independent board will review applications from "local environmentally responsible and socially innovative businesses, co-operatives, community enterprises, or affordable housing developments," for debt or equity financing, according to the co-op's website. Returns on the loans and investments it makes will eventually pay back the RRSP-holders' retirement accounts.

Community investment is not the only model of funding housing projects in the emerging "social finance" sector. Others tie investment returns to achieving identified, measurable social goals; or allow housing organizations themselves to issue and repay bonds on the market.

"We see it every day: people are having to make hard choices because of their housing costs.... They have to commute from one end of the region to the other because they can't find affordable housing near where they work."

The problem is an ever-shrinking stock of market rental housing, as older buildings are demolished and replaced by high-end condominiums that are out of reach to many among the majority of employed Victorians who rely on that type of housing.

"Our economy can't afford that trend to continue," Downing says. "It's a major crisis."

Finance, with a social conscience

Armed with 25 years in the social housing sector, Downing began looking for solutions to the lack of capital for building apartments that were relatively affordable to Victoria's working and middle-class families.

"We looked across the country and internationally at what kind of social finance vehicles were out there," he recounts. "We found lots of stuff."

The answer that went to the top of his self-styled "agenda" was an idea called social finance. He summarizes it simply: "It is financing, it does create a return for people who invest, but it has a social purpose. My agenda is to ramp this up in our own region."

The model he hopes to bring to southern Vancouver Island is heavily inspired by an entire network of community investment co-operatives operating in Nova Scotia. More than 40 separate local funds have so far redirected roughly $50 million into local projects in the 15 years they've been available in the Maritime province, he estimates.

So, where does all that money come from? Simple: from the neighbours. More accurately, from their Registered Retirement Savings funds.

"They're locally, community-controlled funds that then invest in local projects that benefit the local community, but are RRSP-eligible for local investors," Downing explains. (See sidebar for details.)

The basic idea is to encourage local money to stay and support community projects, instead of go into generic products sold in major financial markets. Anyone with funds to invest will be able to do that through the co-op's community bonds.

But the investors Downing really wants to attract are those who are deferring income tax and preparing for their post-working life by contributing to Registered Retirement Savings Plans (RRSPs), a pool of capital potentially worth millions.

The RRSP-eligible shares that the Vancouver Island Community Investment Co-operative hopes to issue early next year would offer slightly lower returns than other private sector funds. But investors would also know that their money isn't being sent out of their local community, and instead is helping address social needs closer to home.

In Nova Scotia where it's widespread, Downing says, "It's a very successful program that's survived three different changes of provincial government because it's so popular with local communities, nobody dares touch it. We've adapted that."

The idea has yet to raise its first dollar in Victoria, and needs to build up a capital pool before taking on any sizable projects. But affordable rental housing seemed like a crucial place to start, Downing says, in part because he knew that several other organizations were on the cusp of developing new affordable rental projects -- but hadn't quite been able to close the gap between their expected costs and available mortgages.

The co-operative is already in talks with three such non-profits about financing, Downing says.

Now, he adds, "We need to create a vehicle where people can put some of their savings... into a fund that will help generate benefits to the local community." And the biggest benefit he sees for those funds, "is affordable housing. Helping to finance market rental housing -- to keep it at affordable rates."

Privatization with a social glow?

As defined by federal department of Employment and Social Development Canada, social finance is, "an approach to mobilizing private capital" that creates an "economic return to achieve social and environmental goals."

As such, the sector "creates opportunities for investors to finance projects that benefit society and for community organizations to access new sources of funds," the ministry states. In a 2012 letter, then-minister of Human Resources and Skills Development Diane Finley celebrated social investment funds because of their "enormous potential for unlocking new sources of capital and new ways of thinking to improve social and economic outcomes" for citizens.

"Our government can't achieve different -- and better -- outcomes for Canadian taxpayers if we don't change how we do things," she wrote.

But while the social finance model can boast some promising cases studies in adding to affordable housing stock in the United States, Europe and Latin America, not everyone is a fan. The Canadian Union of Public Employees (CUPE) -- which represents many of Canada's social service and social housing workers -- submitted a brief to the federal government in January 2013, warning it against social financing.

Representing 628,000 workers, Canada's largest union wrote that it has "substantial concerns" about such market-based approaches to housing, particularly about their "economic sustainability, fairness and risk."

CUPE called it "commendable" that "affluent and wealthy individuals want to address inequality," but argued that the most effective way for them to do so is through the existing tax system, and public services offered by government, not by seeking to "profit" off of social need.

Its brief cast social financing as just another way to shift the burden of social support from the shoulders of government to the private sector. "The services being targeted for social financing are the very same services that have faced chronic under-funding and then public funding cuts in recent years," CUPE argued.

The labour union called for "a full and public assessment" of the social financing model in Canada, "before going ahead with any part or version of those approaches."

For Downing, CUPE's concerns reflect a valid anxiety -- that as governments at all levels pull back from directly financing affordable and social housing, the market and private-public partnerships are being encouraged to step in and fill the void. But given that governments have stepped back from social obligations, there needn't be "only one channel" for funding housing.

"Governments do have a responsibility to invest in the housing needs of their residents," Downing says. “We need to keep advocating for governments to provide financing for social housing. But right now there's half-a-million [dollars] every year on Vancouver Island that people are contributing to their RRSPs. None of that is invested locally in housing developments."

A bigger hurdle to his plan, he says, are costly and time-consuming government reporting requirements designed for giant banks and their associated financial conglomerates.

In order for the Vancouver Island pilot project to proceed, Downing says, provincial securities regulations would need to be streamlined and made easier to navigate for the co-op's comparatively mom-and-pop scale operation -- which is what Nova Scotia and several other provinces did to kickstart their versions of the model, alongside a tax credit for investors.

RRSP-eligible bonds aren't the only arrows in the social finance quiver. A September report released from the Real Estate Foundation of B.C. and B.C. Housing examined no fewer than six potential such models, with varying levels of real-world experience.

For its part, the Real Estate Foundation is interested in any initiatives "that could sustain themselves partly through market mechanisms," says grants manager Leanne Sexsmith.

"It's been 20 years since the federal government started moving away from social housing," she explains. "When there's a major government shift like that, there's some concern that focusing on alternative funding solutions will deflect from the need for housing as a basic public good. But 20 years later, the trend is continuing and groups are adapting.

"The foundation is interested in supporting initiatives that are pushing the envelope in terms of addressing a variety of housing needs at all points on the continuum, and also creating opportunity for some social impact investing."

For his part, Downing vows he's "not waiting for the government to catch up," as the Vancouver Island Community Investment Co-operative joins the burgeoning sector of non-government social housing innovation we've been profiling in this series.

While the co-op's social bonds may raise eyebrows -- or even outrage, in some quarters -- Downing hopes that soon, they'll also be raising walls and roofs that actual working Victorians can afford to occupy.