Big, rude in appearance, and a delicacy sold for $80 a pound in some restaurants in Asia, the geoduck clam is a bonanza for those who raise it or gather it wild along British Columbia's coast. 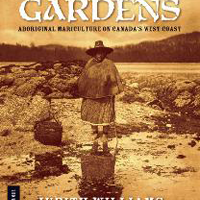 The Department of Fisheries and Oceans Canada (DFO) is about to let a lot more people in on the boom as the federal agency finalizes plans to greatly open up B.C. coastal areas to commercial geoduck farming.

Up until now only a few such aquaculture sites in the Strait of Georgia have been operating, but demand for geoducks has grown steeply over the past 15 years. Most of the mollusks are exported to Asia where they are sought after by some for their supposed aphrodisiac properties.

In 2013 the estimated revenue of wild geoduck fisheries was $50 million, making it B.C.'s most profitable dive fishery.

Now there's a push to move towards aquaculture as shellfish growers want to get in on the lucrative market as well. And the DFO, which in 2010 assumed responsibility over most aspects of aquaculture operations in B.C., is poised to open up more areas and grant more licences to expand the industry.

But for residents on Denman Island, who live right next to Baynes Sound where more than 50 per cent of B.C.'s shellfish is produced, the new geoduck plan is a sign of trouble to come.

Shelley McKeachie, director of the Association of Denman Island Marine Stewards, a local organisation of concerned islanders, said the current level of aquaculture was already causing problems -- a walk on the island's beaches during low tide revealed as much.

As the water pulled away, large areas covered in predator netting became visible; further south the industry impact was more apparent with metal structures scattered across the beach, seemingly abandoned and left to rust.

McKeachie said upwards of two thirds of the island's west coast was like this.

When the tide returned, a red pickup truck made its way across the sand hauling clams to the processing plant. The driver was smiling, apparently unaware it's illegal to drive on beaches. McKeachie said such practices were the norm rather than the exception.

"They seem to be in a gold rush mentality and it's like there's no end to what they wish to do," she said.

On top of that is the debris from industry that washes ashore. Last year the islanders collected between three and four tonnes, said McKeachie -- most of it plastics. "This is the water we all have to eat from," she said.

She worries that the new geoduck venture will only lead to more of the same.

When McKeachie complained to DFO over the issues she was taken aback by their response. They told her they had no means to enforce the rules or fine shellfish growers -- their only option was to advise them to follow the guidelines. "There seems to be nothing sacred. Industry just gets whatever they want," said McKeachie.

David Graham is serving his last term as a representative for Denman Island in the Islands Trust, the federation of self-governing islands in B.C. He is equally frustrated with DFO's handling of the shellfish issue which he said ignores the Islands Trust's authority.

Most of the areas that DFO have cleared for aquaculture are regions that the Islands Trust has designated as protected marine areas, said Graham. While the trust maintains the ability to deny new tenures, DFO's plan allows for existing ones to switch to geoduck without applying for new permits.

"That's not fair from a local government's point of view," said Graham. He said the current level of industry is out of scale but that it's near impossible for the trust to get a say in the matter as DFO won't include them on its shellfish advisory board.

With the new geoduck plan about to be finalised, Graham expects "interesting times ahead."

McKeachie worries about the environmental impact when geoduck tenures start popping up around the island. A common practice for growing geoduck involves planting geoduck seeds in PVC pipes, leaving them in the water for one to two years while the geoduck mature. It takes seven to eight years for geoduck to reach maturity.

The first PVC pipes have already been installed on the island's west coast and in mid-June McKeachie discovered the installation was being expanded. She has a bad feeling about what the island's coast will look like a few years from now.

"I'm just so damn mad at what they're doing [to this island]," she said.

Despite the interest in geoduck aquaculture in B.C., little is known about potential impacts on the marine environment -- in fact, only two papers on the subject have been published to date.

The latest was done by a group of DFO scientists but the results were inconclusive and with lots of caveats. Scientists only looked at a small-scale geoduck farm with one harvest over a period of a year -- which the authors noted was not comparable to the large-scale operations driven by industry with multiple harvests over seven to eight years.

"Larger-scale research is required to examine potential effects," said the scientists in their conclusion.

One area that Dr. Doug Hay, a former DFO scientist, would like to see examined is the long-term effects of geoduck aquacultures on herring. He said the areas that will be opened to aquaculture around Denman Island in Baynes Sound and Lambert Channel are "smack dab" in some of B.C.'s most important areas for herring. Nearly one in four of B.C.'s herring spawn in these areas, he said, and there's no telling what impact industrial geoduck aquaculture will have on that.

"That's the problem," said Hay. "If we don't know then it's not a good idea to open up these sensitive parts of the coast to this kind of development."

Previous disruptions to herring habitats have been known to end spawning in those areas. 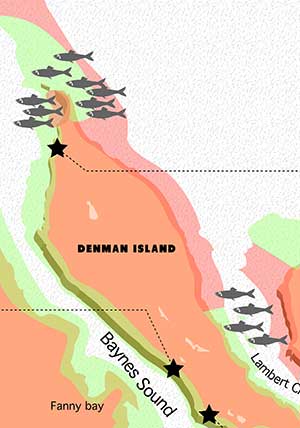 Hay is not against aquaculture but stresses that we need to find areas where it can be done without jeopardizing other resources.

From his home next to Baynes Sound he has a direct view of the contested waters and he's concerned about what he sees.

"What we have right now is an unbridled expansion," he said, adding that the federal government seems to be practising "little management at all."

He's worried that the sound won't be able to sustain much more but fears government and industry will keep developing until something happens.

"It's human nature," he said. "Once we commodify an item we exploit it until we can't do it anymore."

'We need to reseed what we take'

Eric Gant is of another opinion. The former gold miner and wild geoduck fisher, now turned aquaculturist, believes that aquaculture is the only way of ensuring a sustainable future. If he had his way all wild fisheries would be replaced by seafood farming operations.

"We need to reseed what we take out of the land or the environment is going to turn on us," he said, with a nod to the decline of wild fish stocks all around the world because of overfishing.

Gant is ready for DFO's new geoduck venture. At his geoduck hatchery, he showed water tanks that currently hold some four million tiny black geoduck seeds. Once they've grown larger they will be planted like potatoes in the ocean. Gant plans to do that with the help of K'ómoks First Nation, who have six geoduck tenure applications ready and want to make their $30-million shellfish business in Baynes Sound an $80-million one with the help of the giant clam.

Still, Gant is frustrated with DFO's plan which he feels favours the wild fisheries, leaving aquaculture with what he called ill-suited areas for growing geoduck.

Richard Hardy of K'ómoks Nation agrees. He is working to advance the band's geoduck plans and is general manager of band-operated Pentlatch Seafoods, which will be in charge of any future geoduck business.

Hardy said DFO's new plan disregards the First Nation's ongoing treaty process which encompasses all of Baynes Sound and the surrounding territory -- territory the DFO is instead allowing non-First Nations shellfish growers to use.

"It's not accidental," he said of DFO's decision. "It's a blatant disregard of the process."

Both Gant and Hardy said there are a lot of misconceptions about how geoduck aquaculture in B.C. will be. They say they have no plans of planting PVC pipes and will be harvesting far offshore to ensure the least possible disturbance to island inhabitants and the environment -- a message they both said had been largely ignored by aquaculture opponents around Baynes Sound.

Gant expressed frustrations with getting his points across, claiming his involvement with aquaculture made him subject to a "witch hunt". He'd like more dialogue but said he's given up trying to create it.

Hardy said K'ómoks Nation have been stewarding and living of the land in the region for thousands of years.

"We're not going anywhere," he said. "Why would we do something that could possibly compromise this area?"

DFO expects to have its final plan available in fall 2014.