[Editor's note: Every day this week we'll feature a report in Christopher Pollon's quest to follow a pound of B.C. copper from cradle to grave -- and back again. The story below tells why this needed to be done. The map above shows you where he went and what he saw.]

I'm standing on top of five billion pounds of copper on a sunny August afternoon in southwest British Columbia near Princeton, trying to figure out where it all goes.

Dust and smoke rise, as explosives shatter seams of rock into moveable chunks 350 metres below me. Bungalow-sized Komatsu trucks (the tires alone cost $40,000 each) wind downward around the terraced edges of the pit toward North America's biggest hydraulic shovel which can scoop up 80 tons of rock in a single bite. Deceptively toy-like from a distance, the moving parts of the mine perform their ritual 24 hours a day, seven days a week. "Mining on this scale is what makes it economical," Don Strickland, Copper Mountain's VP of Operations, tells me.

By last century's standards, there's not enough high-grade ore here to warrant mining it. But ever-bigger equipment and new processing methods have made it possible to move -- and mine -- mountains. With historically high copper prices over the last five years, and most of the world's best deposits already tapped, Copper Mountain can afford to break and crush 150,000 tonnes of rock a day that will produce just 90 tonnes of refined copper down the road -- and still make a profit.

The vast operation makes an amazing spectacle. Yet as far as I can tell, practically no-one here seems to know or care what happens to all this copper once it leaves the mine for somewhere else. As long as the company can extract and sell a consistent supply at a contained cost, it's 'end of story' -- unless you happen to be me, in which case it's just the beginning.

I've come to Copper Mountain (See Chapter 1 in the map, above.) on the start of a personal quest: to follow a pound of copper from this southern B.C. pit through its entire life-cycle. I want to see where it goes, what it becomes, and where, and so better understand the forces that dictate the ebbs and flows of our provincial resource economy.

There are several reasons to focus on copper. After coal, copper is B.C.'s biggest and most lucrative mineral export. The red metal is essential to the manufacture of consumer electronics, housing and automobiles -- making it a bellwether for the global economy's recovery from the recession of 2008. And soon we may be digging even more of it. At least five proposals to develop large deposits in the northwest are now in play, with new mines expected to come into production in the coming decades, including one as early as this year. 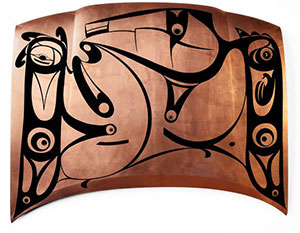 Mining is also what Canadians do best after hockey. Copper mining by First Nations goes back millennia on Canada's west coast. Modern-day British Columbians have a particularly romanticized connection with minerals -- one part truth, one part spin -- born when a flood of mostly Yankee prospectors descended on the Lower Fraser River in 1858 and accidentally prompted the creation of a province. Yet despite our pride in being "miners to the world," our knowledge of the wider marketplace of which we are a part tends to stop at the edge of the Pacific.

We need to look further. Canada's federal government has declared the country open for resource extraction. B.C.'s newly re-elected provincial government has dedicated its four-year mandate to expediting exports of natural gas and is spending nearly a billion dollars to extend power lines and other infrastructure to those promising copper fields in the northwest. What happens to our copper and other resources once they leave our shores is about to affect us here at home more than ever before.