David Cobb is preparing to go to jail for a day, after he was found in contempt of court.

Why successful salmon season spells trouble for BC fishermen

But he is more concerned about the welfare of the boat that he and his two dogs call home -- a working boat that he says deserves a place to tie up, as well as respect for its role in West Coast history.

The 66-year-old skippers the Chief Skugaid, commissioned in 1912 as a Bering Sea halibut schooner, motorized and later used for Prohibition-era liquor exports to California. In the 1960s, Chief Skugaid added three, 24-foot freighter canoes. When the Canadian Fish Company (Canfisco) didn't want it anymore in 2010, Cobb bought it for an undisclosed sum. Cobb had sold salmon and herring to the boat in the mid-1970s when it was a trawler for B.C. Packers.

The 80-foot carvel, wooden Chief Skugaid and its sister Chief Zibassa (now the Western Star) were commissioned by Canfisco and built at Vancouver Shipyards, between Cambie and Abbott streets on Coal Harbour. Skugaid is 16 years older than the RCMP St. Roch, which is on permanent display inside the Vancouver Maritime Museum.

"The value to me [is] beyond its utility. It still is a using or working boat, notwithstanding it resembling a halting site, as they say in Ireland, or tinker's encampment. It's upside down and inside out, because I'm redoing the bunks," Cobb told a reporter dockside in New Westminster.

It currently has eight big bunks in the galley, and will have 12 to fulfill Cobb's planned launch in 2014 of what he calls "eco-tourism, 'hairshirt' version: kayaking, gold panning, whale watching in inlets up the coast."

That is, if Cobb can find a place to park the boat. His search for moorage recently ran aground in court, with his unwillingness to move the boat resulting in a night in jail.

The New Westminster pier at the Fraser River Discovery Centre is a natural home for the Chief Skugaid, since the Royal City's harbour commission came to be 100 years ago in 1913. City hall disagrees, citing conditions of its water lot lease with Port Metro Vancouver.

A division of real estate investor/developer Larco known as 143 Cathedral Ventures Ltd. convinced B.C. Supreme Court Justice Shelley Fitzpatrick on Jan. 16 to order the Chief Skugaid be gone by Feb. 15 from a nearby pier. On March 9, Cobb moved it to the present location. The City of New Westminster sought an injunction on April 11 against Cobb and an order to move the vessel, alleging trespass because its presence violated conditions of its water lot lease with Port Metro Vancouver.

B.C. Supreme Court Justice Victoria Gray found Cobb in contempt of a May 8 order by Justice Robert Jenkins "by continuing to trespass on the water lot located in the Fraser River located to the south of the Fraser River Discovery Centre." Jenkins had ordered Cobb to remove the boat by midnight June 14. 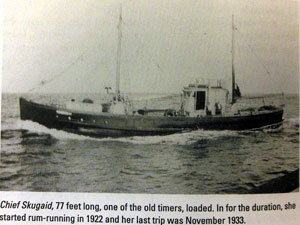 The Chief Skugaid in 1930, “before she unloaded a big cargo of Vancouver liquor in California waters." Photo from The Historic Chief Skugaid website.

"I'm like in Newfoundland -- between a rock and a hard place," Cobb said. "I considered this an interim refuge or sanctuary. I appealed to the city at that point three months ago; I offered them $800 a month which is far more than this berth is worth; I offered them a hold-harmless waiver in lieu of an insurance policy. They summarily and flatly refused. They wouldn't consider it."

A request to interview New Westminster Mayor Wayne Wright was not successful.

"At the bottom of the whole matter is... the ability to arbitrarily exercise that power they wield," said Cobb of the city's efforts to push him out. "This is not power that's vested in them by the electorate. They are the people with the lines of power or the reins in their hands, and I'm virtually powerless through the courts to rebut or rebuff."

On May 30, Cobb awoke to find a drowning man outside the Chief Skugaid and assisted in his rescue. That was two weeks after he was paid a visit by the Vancouver Police patrol boat R.G. McBeath, which had, onboard, two Transport Canada inspectors and, in Cobbs words, "a token New Westminster constable" for the "city-sanctioned home invasion."

Cobb claims Chief Skugaid has all the requisite safety features, but is facing a catch-22. It has to be in an approved marina to apply for insurance, but marinas, he says, are reluctant to host an uninsured boat.

"I have gone above and beyond the purchase price, I've got about $30,000 into it," Cobb said. "I'm depending on my old-age pension, a very small CPP, and my Irish army pension."

Once the cosmetics are done on the boat, Cobb promises "it will be every bit as good or better than most of its 100 years, especially since it has the low-hours, large Volvo [engine] in it now."