When Mike Bonnici decided to leave Mormonism six years ago, he turned to his life's other passion: street art. Today, knife juggling, riding a 10-feet tall unicycle and performing for passersby attracted to his art is his full-time job. 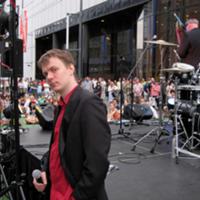 According to Bonnici, leaving the religion he was raised into allowed him to break away from the "severe constraints" of Mormonism and fully embrace the "powerful force of freedom" embedded in a busking lifestyle.

Busking is divine, he says. He sees art as something that has allowed him to connect with people in a meaningful way. Busking is also "a way I have been able to deal with some of the weird ideas about trying to reconcile my past with my future," he says.

When asked about the influence art has in him, that answer is simple: "Art makes me human."

Two months ago, the passion he feels for busking put him in a hard spot. Bonnici was forced to leave Granville Island, his usual performing spot for the last three years, after the Granville Island Cultural Society (GICS) -- the organization that oversees all cultural programs on the island -- suspended his pass for 13 months. The decision came after a discussion between he and Una Memisevic, the busker co-ordinator for the GICS, over a new set of rules the cultural society came up with.

According to Bonnici, Memisevic said she felt threatened by his behaviour during the discussion. Bonnici admits that he "lost his cool," but he says he was not in any way mean-spirited or threatening, just passionately arguing against something that affected his income and ability to perform.

When contacted to confirm Bonnici's version of the story, the GICS declined to talk about his case.

Bonnici was protesting four rules regarding busking activities. The first is a ban on the use of fire on the island. He says there's no reason for implementing that rule, considering that in the last 10 years there hasn't been a fire-related accident and they are all highly trained professionals that know how to manage an emergency.

The second rule Bonnici is opposed to is the doubling of the fee for the pass that allows artists to perform on Granville Island. The cost of the pass is now $110 for the entire season, up from $55 last year. The GICS's reasoning, according to buskers, is that there hasn't been a price increase in the last five years and now they are catching up to the price of other venues.

Bonnici is also against a change in policy that prevents artists from doing circle shows -- the kind where an audience gathers in a circle around the performer -- before or after another circle show. The rule, says Bonnici, eliminates 30 to 50 per cent of the spots circle show performers like him were eligible for before the rule came into effect. Although the GICS says that the rule has been in effect for several years, the artist argues they started enforcing it just a couple of months ago.

Finally, Bonnici protested a rule that artists must undergo a casting process in order to perform on the island. Busking, he says, is about learning on the fly, trying your luck and using your resources. Forcing artists to audition, he believes, will ban novice performers from the island and affect the variety of shows presented there.

When Bonnici found out about his suspension, he tried to appeal the decision within the GICS. He says he has tried to discuss his suspension numerous times, but has heard silence. That's why he decided to go to the agency that manages the island; the Canada Mortgage and Housing Corporation (CMHC).

Six weeks ago, Bonnici sent Lisa Ono, CMHC's manager of public affairs and programming for Granville Island, a letter asking her to mediate between him and the GICS. Ono, Bonnici says, declined to do it.

When contacted, Ono declined to talk about the juggler's case. She pointed out that Granville Island has a code of conduct, and buskers who fail to comply with it can get their licenses revoked. Regarding the new rules, Ono said that the objective is to provide an environment that "encourages and enables a range of high-quality busking performers."

A magician leading the charge

Bonnici is not a sole fighter when it comes to the new rules. A group of Granville Island performers who share the same concerns have organized themselves and the GICS has agreed to negotiate with them.

Eden Cheung is representing artists in this negotiation process. Cheung says he's not thrilled to be in a leadership position -- he doesn't like talking to authority figures, he says -- but understands the importance of the task at hand.

Cheung has been a magician for eight years and a full-time busker for five. Unlike Bonnici -- who performs as DynaMike -- Cheung performs only as Eden; his given name is good enough for the stage, he says.

Four years ago, Cheung started performing at Granville Island. He left downtown Vancouver, his previous spot, when he felt his act was ready to attract a larger crowd. One show a day is usually all you get on the island, Cheung says, but it's enough to provide him his daily wage.

The magician acknowledges that the GICS wants to make a program that benefits the whole island. But he does believe that there are mismanagement issues, like the decision to double the price of the pass overnight instead of adjusting it accordingly over the years.

Cheung is cautious when talking about Bonnici's situation because he knows that the juggler has been talking to legal sources for advice. Cheung says its his personal opinion that Bonnici was "a little bit out of line," but believes that his colleague has been treated unfairly and that he was given an extremely severe punishment in order to scare other complainers. "Back in the day, if you stole a loaf of bread, they would cut your hand off... it's kind of the same thing," he says.

Nick Broad, one of the founders of the Busking Project -- an effort to document busking activity all around the world -- sees the new rules in Granville Island as another example of a worldwide trend to increase restrictions on street performing.

In 2011, Broad embarked in a journey to document buskers in 40 cities on five continents. His trip allowed him to interact with around 300 artists and discover how street art varies in every country. It also showed him the numerous endeavours performers face in order to be able to perform on the streets. During his journey, he learned of regulations to restrict, and even ban, busking in various cities around the world.

The Busking Project website contains bios of 360 performers from all around the world, and Broad sees the site as a space where performers can promote themselves, support each other, and show the diversity of street art. It has another goal as well: to help street performers defend themselves in court.

Broad believes that lack of positive feedback is to blame for the bad rap against street art. He claims that no one ever calls the city council to comment on how enjoyable a show was. He also believes that street performers are still seen as beggars instead of artists, and that there's an effort to "clean up" the streets.

According to Broad, losing street performers would mean not only losing a way to "educate kids and entertain children," but also losing a way for people to make a living. Broad also believes that it means the loss of a rather unconventional form of exchange, one where the costumer gets to decide if a product is worth paying for after they have used it. "In my eyes, is the most honourable and honest way of making a living out of the arts," he says.