It was not looking good at Dr. Margaret MacDiarmid's Vancouver-Fairview campaign headquarters when the polls closed at 8 p.m. on Tuesday. 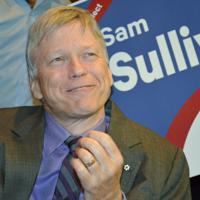 Add One More to Sam Sullivan's Many Political Lives

So the volunteers were going to make the best of a potentially bad situation.

Salmon was on the barbecue and beer in the cooler as the webcast of CTV's election night coverage was booted up on a screen inside the former Veste Cucina kitchen design store on West 2nd Avenue.

Early reports from the NDP and Liberal campaign headquarters were telling different stories.

The NDP was in the Vancouver Convention Centre East, the closest venue to the downtown Vancouver cabinet offices in Canada Place. The same venue where Adrian Dix won the party leadership in 2011.

The Liberals were at the Sheraton Wall Centre, where they celebrated the first of three Gordon Campbell-led victories 12 years ago on May 15, 2001. On TV, the NDP setup looked glitzy, with party members milling about in anticipation of history. The Liberals? A tad dull and empty.

Party sources were saying internal polling scenarios contemplated a worst-case scenario of 17 seats across the province. Campaign manager Mike McDonald sent out a plea for Liberal voters to get to the polls with less than three hours to go.

An orange wave was supposedly gathering off the coast and, according to pollsters, set to spread eastward to the Rockies. Then the tide turned. The NDP, poised to be in power for only the fourth time, didn't get the vote out. The Liberals did, perhaps owing to the controversial Multicultural Outreach strategy that was hatched in-house, with public resources, despite government rules. Clark had paid particular attention to private schools, churches and temples in the last two years. Smart places for a retail politician to seek wholesale votes.

Heyman knocked on doors until the end

MacDiarmid had ended her "get out the vote" campaign an hour before the polls closed, but her NDP opponent George Heyman was pounding the pavement and knocking on doors until the very last minute. His office, in a former mattress store on Broadway, seemed tense.

The results rolled in. Leads began to develop and mathematical trends were established, so much so, that winners were declared, riding by riding. Angus Reid pollster Mario Canseco stated earlier in the broadcast that the chances of an NDP win were 90%. At 9:06 p.m., CTV called it a Liberal win. There was widespread disbelief among the dozen people gathered so far. "Are you surprised?" "We won?!?"

More results showing the surprise Liberal win -- and shocking NDP defeat -- came in. At a breakneck speed. It was standing room only. Bruce Young, a lobbyist with Earnscliffe Strategy and a high-ranking federal and provincial Liberal strategist, arrived wearing a jean jacket.* Despite the unfolding comeback for the party, he had a concerned look on his face. "She's on pins and needles," he said to one member about the count in Vancouver-Point Grey where the NDP's David Eby eventually won an upset.

MacDiarmid appeared and was cheered by supporters, but her enthusiasm was muted. Away from her supporters, she admitted her single-digit lead over Heyman may not hold and she may not return to Victoria. She was more upbeat about the province-wide result.

"I always believed that we had a chance to form government again," said MacDiarmid. "I wasn't feeling terribly optimistic."

In the end she lost by 966 votes to Heyman, the former B.C. Government and Services Employees' Union boss. Her total was 9,999. Was it one shy of the 10,000 threshold because of the absentee ballot that Clark may have spoiled at a a Burnaby advanced voting photo opportunity on May 8?

"I don't think it's good to live in the past," MacDiarmid said.