Chances are the next government of B.C. will be chosen by approximately half of all eligible voters. That means that even in a landslide the winning party will probably have the support of no more than a quarter of all the province's citizens. 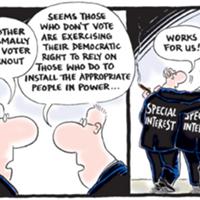 Where Have All the Voters Gone?

Like other Canadians, British Columbians are becoming less and less inclined to vote. In the 2009 provincial election, only 51 per cent of all estimated eligible voters bothered to turn out.

A lot has been written about falling turnout rates and the precise causes of the decline are still largely a mystery. Some blame a dwindling sense of civic duty in young people. Some blame negative, fear-based campaigns.

HOW TURNOUT TRIPS UP POLLSTERS

"Because those that turn out usually differ substantially from those that don't."

Penner, a veteran campaign pollster, said "the better pollsters" use turnout models that try to predict who's going to vote. One way to do that is to ask respondents if they're going to vote. Those answers aren't always reliable, though.

People who aren't going to vote may tell pollsters they intend to do so because that's the socially acceptable answer. Or respondents may intend to vote but then change their minds.

So pollsters can also look at who has tended to vote in recent elections -- older people and homeowners are two such groups -- and weigh their data accordingly.

Unfortunately for pollsters, the last election won't be just like the current one, Penner said. "So you kind of have to put it all into the mixer and kind of have to figure it out. And the more times you do it, the better you get at it and the more likely you are to be correct."

While all good campaign pollsters have some sort of turnout model, most pollsters who make their work public through the media don't, Penner said. And that affects their accuracy, he argued.

Mario Canseco, vice-president of Angus Reid Public Opinion, said his firm does have a method for predicting likely voters.

In last year's U.S. presidential election, the Reid firm noticed that supporters of Republican Mitt Romney were less committed to voting than those of President Barack Obama, he said. The difference meant that the election wasn't as close as some pundits were predicting.

But there's another side to it. Declining turnout also affects how elections are fought. Ironically, the more that voters stay home because of politicians' bad behaviour, the more likely politicians may be to behave badly.

Lyle said that in the old days, when turnout was in the 70 per cent range or higher, campaigns concentrated on wooing ambivalent voters, or what Lyle referred to as "cross-pressured" voters.

But as the turnout gets lower and lower, the people who show up to vote tend to be the ones who aren't cross-pressured -- "people that have very consistent points of view, very ideological positions," said Lyle, who was Gordon Campbell's campaign director in the 1996 B.C. election. That's led parties to build their campaigns around strong differences "that will essentially scare their voters into getting up and going to vote," said Lyle.

In other words, politicians and strategists try to create wedge issues -- issues that motivate true believers and offer little room for compromise. Abortion and gay rights are classic examples; in B.C. elections we've seen treaty rights and debt and the deficit used to drive a wedge between voters.

Subconsciously, he said, the torn voter might say: "Well, I think the NDP's more interested in health care, but I think the Liberals would do a better job of balancing the budget. How am I to resolve this? I don't like this. Maybe I can just ignore it."

And, except for a slight uptick in 2005, every B.C. election for the past 30 years has seen a lower turnout rate.

French philosopher Jean Baudrillard argued that what we generally see as voter apathy is in fact a way of resisting a political system that disenfranchises ordinary people. Most commentators, however, see nothing positive in declining turnout. Pollster Frank Graves has written that the trend may represent a shift "from democracy to oligarchy."

Graves, like many writers, observes that those least likely to vote tend to be the young and the low-income. "Although these groups have always had lower participation rates, their current anaemic levels of voting make it difficult to claim that governments legitimately speak for these large and growing portions of society," he writes.

A recent study by BC Stats found that a number of factors seem to influence turnout. The study, titled Who Heads to the Polls? Exploring the Demographics of Voters in British Columbia, found that neighbourhoods that had high turnouts in the 2009 election had:

Neighbourhoods with low turnouts had:

The study suggests that voting becomes a habit: almost three out of five people who voted in 2009 had also voted in the 2001 and 2005 elections. Strikingly, two-thirds of all newly eligible voters -- those who registered after the 2001 election -- did not bother to vote in 2009.

As that last statistic suggests, voting turnout declines sharply with age. As the graph below shows, there is a huge gap between the turnout rates of young voters and older voters.

This may not mean that young people are apathetic when it comes to politics. A number of studies, including one by Statistics Canada, suggest that young Canadians are often politically active in the sense that they might sign a petition or boycott a product -- they just don't seem to think voting is important.

Whose voters will show up?

Given that the young and low-income tend to be less likely to vote, it is sometimes said that the New Democratic Party benefits from a higher turnout. But if this was ever true, it seems unlikely to be the case in the May 14 election.

"In this election, I'm not sure higher turnout would be as good for the NDP," said Lyle. "Because while socioeconomic factors have an influence on turnout, so does emotion.

"Right now, if you're a New Dem, you're probably both angry and excited. You're angry about the Liberals and you're excited about the prospect of an NDP government."

It's a long way to Election Day, Lyle noted. Still, "at this point, odds are it's the Liberals who are going to have a harder time turning out their vote than the NDP," he said. "If there's a 45 per cent turnout, I wouldn't panic if I was the NDP. Because my voters are mad and excited, so they're likely to show up. They're more likely to show up than a disillusioned, disenchanted, despairing Liberal."

Pollster Bob Penner agreed with Lyle, saying you can't generalize about how turnout will affect the fortunes of one party. Usually, parties want the turnout of their voters to go up, he said.

Turnout is often a factor in elections, said Penner, who has a long history of working for election campaigns.

"It really depends on how it plays out. No matter what happens, there'll be some close ridings and in those ridings the party that's most successful at turning out its votes will be the one that wins."

Penner said that given the NDP's current lead in the polls, the Liberals will have to close the gap before turnout becomes a major factor in their campaign.

If the gap between the two parties does close, it could have an effect on turnout. The BC Stats study found that highest turnouts in 2009 tended to come in the ridings with the closest races. That was in an election where, as another BC Stats study found, interest was generally low, even among those who voted.

How much of this was due to negative campaigning is impossible to tell. But if Lyle is right, turning away from negative politics won't improve anything.

"People who want politics to be better and are staying away because it's not better reinforce the bad side of politics," he said. "If they want politics that's more focused on the centre, that's more open to compromise and more balanced, they need to show up so that campaign strategists see them as people likely to vote and then seek their support.

"So long as they stay home, the campaign strategists are going to focus on mobilizing their base, which is going to mean wedge issues and fear politics."