Christ Church Cathedral stands overshadowed by modern glass and steel skyscrapers in Vancouver's downtown core. The century-old Anglican church is a bit of Vancouver heritage, a reminder of the province's British colonial roots. When British royalty visit, they worship there. 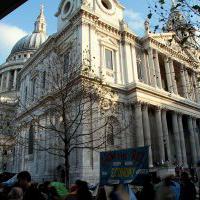 On a Monday, the church offers shelter from the rain and a meal for city homeless. On a Sunday, it still provides mass. But on a Saturday late in April, the hall of worship provided space for an event of a different sort. Delegates from the Lower Mainland's 60 Anglican parishes met with over a dozen representatives from other denominations to take a good look at projects to transport more oil sands crude, and the hazard those pose to the environment and B.C. First Nations.

"No religious tradition says 'blessed are the greedy.' It's out of that tradition that people can speak to the pipeline tanker issue," said Robert Worcester, who sits as co-chair of the eco-justice committee of the Anglican diocese of New Westminster, which stretches from Hope to Tsawwassen.

He said participants learned about the impacts of the Enbridge Northern Gateway and Kinder Morgan pipelines, and increased tanker traffic in the Port of Vancouver.

From 'prophetic' to eco-focused

The Compassion for Creation event, organized by Anglicans for Eco-justice, is one more milestone towards more faith group participation in environmental debates. And the heavy Anglican presence at the forum reflects the increased pull environmental issues have among many mainline Christians, who are putting more pressure on their leaders to oppose energy projects that will increase greenhouse gas emissions and perpetuate our reliance on fossil fuels.

Those at the forum, said Worcester, agreed Anglican bishops needed to take a stronger stance on the Northern Gateway Pipeline.

This is not the first time Anglicans have waded into B.C. energy debates. In response to pressure from the B.C. and Yukon diocese, six Anglican bishops released a Good Friday statement this April expressing concern over the "fairness" of the Enbridge Northern Gateway pipeline hearings. The group said federal Conservative comments, and government attempts to streamline environmental assessment reviews, risked jeopardizing democracy by denying those affected -- especially First Nations -- a fair chance to air their views.

That statement is the strongest the church has been willing to make on the pipeline, and it reflects caution among top Anglican clergy, who don't want to alienate Anglican churches who might be supportive of the pipeline, said Worcester.

In a recent story on The Tyee, Donald Grayston, a retired Simon Fraser University religious studies instructor, said the Anglican clergy was once deeply involved in social causes. The 1960s and '70s formed the heydays of the Anglican social mission in Canada, when "prophetic ministry" found purchase amongst the top ranks of B.C. clergy, he said. Ministers were encouraged to prophesy hellfire and damnation as a way of moving society to address injustices.

Anglican activists in B.C. and elsewhere worked parallel with other civil-rights era campaigns, where church organizations -- led by the likes of Rev. Martin Luther King -- formed the nucleus of many groups seeking to rectify racial and economic inequity.

However after the 1970s, church attendance rates fell and prophetic ministry appeared to be turning off too many people. In recent years, the upper echelons of the Anglican Church have been reluctant to take sides on issues of systemic inequity like those raised during the Occupy Wall Street protests. Many churches have preferred to focus on social issues like gay marriage, which has created friction between progressive and conservative Anglicans worldwide.

'Late to the table'

Now, though, new alliances within the church may be forming over saving the environment.

"Christians have come late to the table" as active participants in the environmental movement, said Mallory McDuff, a lifelong Episcopalian and an environmental education instructor at Warren Wilson College in North Carolina. She is author of Natural Saints and was lead contributor to the recently published Sacred Acts, two books that give voice to people of faith on the front lines of environmentalism.

She said the weight of scientific evidence over climate change, and concern over environmental despoliation in general, is leading many faith groups to fuse existing traditions of social activism with environmental concern. In other words, Anglicans are increasingly being swept up in a broader green faith movement.

Stewardship over God's creations and loving neighbour as self are two principles which lead Christians to respect nature, said Reverend Margaret Marquardt, who helped organize the forum at Christ Church Cathedral. "Neighbour is not just humans being neighbour; neighbour is other creatures and neighbour is the land," she said.

Beyond 'dominion over the earth'

Neighbour also includes developing world countries who don't have the resources to cope with the many impacts of climate change, said McDuff.

"Christian groups worldwide are on the front lines of disaster response.... And they're like, look, we're going to be in the position of full-time disaster relief if you can't get people on board to address climate change through both mitigation and adaptation," she said.

"We're really seeing a re-framing of a classic argument that Christians think we have dominion over the earth.... Unfortunately, the reality is a lot of people, including environmentalists, are just hearing this vocal minority like (former Republican presidential candidate) Rick Santorum and some of the super conservative Christian groups."

McDuff said Christians are involved in climate change activism in North America. Initiatives like Creation Care and What would Jesus drive? have tried to curb emissions and waste south of the border. The Keystone pipeline protests involved religious groups both in Washington, D.C., and on the ground in Nebraska, said McDuff. Closer to home, April of last year, Earth Ministry -- a Washington state coalition of Christian activists -- played a key role in lobbying to have the state's last coal power plant retired. (The bill, E2SSB 5759, passed, and both of the plant's coal-fired boilers are to be shut down by 2025.)

"We're finding that there are a lot of congregations, based on the principle of justice, that are able to unite around climate change" despite disagreeing about issues like abortion and gay marriage, said McDuff.

As a consequence of that agreement, Christian activists can harness and deploy church space, congregation volunteers and donations, and other church assets from multiple different denominations in the service of environmental causes. And their contributions could become increasingly significant in Canada, where the Conservative government has already expressed suspicion towards where secular environmental groups get their money.

A moral stance on consumerism

He said many participants at the April forum were of the view that prevailing consumerist values were broken, and that Christians could play a key role in reshaping them. Voluntary simplicity, he said, is something common to many Christian traditions, and it's the "most radical position" one can take in a consumer society.

"It's appropriate for people with a religious background to say money is not the most important thing here.... It's respect for (First Nations') culture and the natural world; these are more important issues than how much money a few Texans can make," he said.

"In the states there's the confusion between right-wing political ideologies and right-wing conservative religious values.... We don't buy into that."