It started with a few scribbles on the back seat of a Surrey municipal bus. 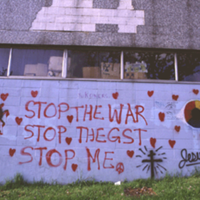 The Writing's on the Wall

Popping the top off a dark blue permanent marker, Pontus Agren began to write, his clunky block-letters rendered more illegible with every bump and twist of the road. "Public Enemy Rules." You might be able to decipher the tag if you bothered to notice it at all. Agren was 14 years old at the time and this was about as pure a form of self-expression as he could imagine.

Agren began seeking out new canvases and covering them with new tags.

"Public Enemy Rules" he quickly cast off as so much "bubble gum" graffiti, like some love note etched into a homeroom desk. He cycled through a half dozen aliases before finally settling on a distinct trademark in the final years of high school. By then he'd swapped his markers for aerosol cans. Soon the tag was everywhere: thrown up on basketball backboards, underneath overpasses, and along warehouse and alleyway walls everywhere between Surrey and Vancouver.

That was the spray-paint flourish that made Agren a known entity within the loose subculture of Lower Mainland graffiti writers.

All of Agren's tags have long since been whitewashed or tagged over. He stopped writing graffiti 10 years ago. Yet even now he is reluctant to tell me about his graffiti nom-de-plume.

Shortly after he stopped tagging, after his umpteenth and final run-in with the police, Agren became the first anti-graffiti coordinator for the City of Surrey. Last Thursday, he graduated from Simon Fraser University with a degree in Criminology. When I meet him at a New Westminster cafe, he speaks in the clipped poly-syllabic nomenclature of academics. This summer, he plans to work for the Vancouver-based anti-graffiti program, RestART, as a mentor to young taggers.

Again, a smile and a shrug. "By shooting off my name, those young taggers will think I'm a nobody." A decade later and on the other side of the law, tagging is still all about cred.

After Agren's final arrest, he was diverted into a "restorative justice" program. He was introduced to a number of city representatives, former taggers, police officers, and property owners. As Agren told me in a phone interview: "Ideally, with that sort of restorative justice process, an offender will learn empathy for their victims and will learn how they might be harming others and how to possibly take responsibility for their actions." Once inside the program, an ex-tagger can then be given the resources to pursue legal alternatives to tagging, such as mural painting.

'There was no light bulb moment'

As Agren himself admits, his story is ripe for oversimplification. "I think some anti-graffiti proponents point to my story as a shining example of transformation," he says. "But to be totally truthful, there was no lightbulb moment. Eventually I just grew out of it." Hardly the consummate tale of personal redemption, Agren stopped tagging gradually.

Moreover, Agren doesn't necessarily see a younger version of himself in those he hopes to mentor. "I don't think I'm representative of the taggers today."

For one, Pontus Agren was never a troublesome kid. He never dealt drugs and he never got into fights. His late-night run-ins with the police never amounted to anything more than confiscation of his paint and a stern warning. The first time he laid his hands on actual spray paint cans, he didn't "rack" them -- shoplift the aerosol canisters from a hardware or art-supply shop. He asked his mother. And she agreed. She rushed over to Canadian Tire.

Agren laughs as he recounts his mother's lack of concern: "'Here's your paint,' she said. 'Now stay out of my hair, go to school, and do good.'"

And he did do good. Agren enrolled in a technical drafting program right out of high school.

With an intimate understanding of tagging, Agren does not criminalize graffiti. But neither does he take it lightly. Like all converts, he is all the more steadfast in his beliefs.

Throughout his thesis and throughout our conversation, two basic themes resound: graffiti is harmful and graffiti is important.

He speaks of "a natural connection" between street violence and the "ego and bravado" inherent in marking one's territory with flashy calligraphy. He explains how both tagging and drug dealing take place in the same environments. He speaks of "slippery slopes," "broken windows," "public apathy," and "correlation, if not causation."

On the topic of his own career as a tagger, his tone softens. Less clinical, nearly sentimental, Agren uses the terminology of a recovering addict.

"There is a weird goal within the graffiti subculture to be the 'King of the City,'" he explains. "You want to be the one with the most tags out there, with the best skills, the one who can get to the most interesting locations.

If you talk to the APA [American Psychological Association], they'll laugh at you. But I would call it an addiction." For Agren, what distinguishes the addiction of tagging from legitimate artistic drive is the rule of law. It is this understanding that has led Agren to where he is today. When he goes to work this summer for the anti-graffiti initiative RestART, he will be doing so not because he has learned to hate graffiti, but because he still loves it.

"When I go to an abandoned building that's just covered in graffiti, it's just so rich with culture. It's all the meaning and connotation, it's the hate, and the egos, and the challenges, and the competition. And it's the style. Some people called me a sell-out for becoming an anti-graffiti coordinator when I was 25 years old. But I figured that this is a good way to stay connected."