[Editor's note: It's the weekend when we give more flowers than at any other time of year. Most of those blossoms will come from abroad, often from developing countries where nursery conditions have attracted criticism for being hard on the environment and exploitive of workers. But now new initiatives, modeled on programs that certify other indulgences like coffee and chocolate as good for the conscience as well as the morale, are certifying some bouquets as 'fair trade.' But do such labels really represent better practices where our flowers are grown? Supported by The Tyee's readers through a Tyee Fellowship, reporter Gabriela Perdomo has been checking out the high valleys of South America's Andes that produce more than half our imported flowers. Here is the first of her reports.]

I can't always buy flowers for my mom on Mother's Day, because I live in Vancouver and she lives in Bogota, Colombia. But on this Mother's Day I'm in Bogota and I'll certainly show up to our traditional Mother's Day lunch with a bouquet of white lilies, her favourite. Mother's Day is as big a deal in Colombia as it is in Canada. My mother-in-law lives in Ontario, and my husband and I will of course make sure she gets some flowers on her day, too. 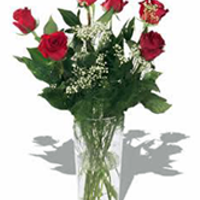 Growing up I can't remember a week when we didn't have roses, alstroemerias, freesias or lilies in our house in Bogota. I knew the flowers were from Colombia, grown not far away in valleys west and north of the city. But it never occurred to me to question how they were grown, or how far they had traveled. Now I know that the flowers my Canadian mother-in-law receives this weekend will most likely be from the same South American valleys that produced the blooms I'll deliver by hand to my own mom.

I also know that flower farms in developing countries have been accused of paying unfair wages, employing child labour, exposing workers to harmful chemicals and polluting the environment and water sources with toxic agrochemicals. That led me to wonder: on the weekend when North Americans buy more flowers than at any other time of year -- spending an estimated $1.9 billion -- do all those bright blossoms hide a sordid back-story of human and environmental abuse?

Perhaps you thought the Fraser Valley provides most of the flowers we enjoy in British Columbia. While the valley has a lot to offer, especially those beautiful tulips now in season, the truth is that most cut flowers sold in our province come from somewhere else. Last year, our province imported $23.6 million worth of fresh cut flowers. Nearly half came from Colombia, and another 15 per cent from Ecuador. Roses are no longer cultivated commercially in B.C. at all -- pushed aside by imports.

We're not the only ones getting our flowers from farther and farther away. The global flower market is gargantuan. Each year, fresh cut flowers account for over $100 billion in global trade. Social and environmental circumstances in the countries where they are grown -- including Holland, Canada, the United States, Israel, Colombia, Ecuador, Costa Rica, Kenya, Zimbabwe and Pakistan -- vary greatly. According to Industry Canada, in 2010 this country bought $145.5 million worth of flowers from all over the world. Of those, $70.1 million came from Colombia and $29.9 million from Ecuador.

We are also buying more flowers. I spoke to several flower wholesalers, retailers and supermarket managers who all told me the fastest growing section in North American supermarkets is the flower department.

B.C. is no exception. Flower imports to the province have grown nearly 20 per cent in just four years, driven mainly by increased purchases from Colombia, home to world-famous roses and after Holland the second-largest grower of gerberas. Those imports are poised to grow larger, along with other kinds of trade, when Canada's free trade agreement with Colombia comes into effect on July 1.

While all these gorgeous flowers may brighten hearts on Mother's Day, I had to wonder whether they concealed a disturbing history. For over three decades, the flower industry has faced criticism on two major fronts: the treatment of its workers, and the impact of large-scale floral agriculture on the environment. Among other things, labour groups have complained about the use of child workers, unequal treatment of men and women, unfair wages, and long days lasting up to 11 hours.

And perhaps because flowers are not generally for human consumption -- except for rare cases where chefs would like you to have that chocolate mousse with some rose petals -- the flower industry has enjoyed some leniency in its widespread use of agrochemicals. That has been accompanied by complaints about worker exposure to harmful chemicals, the lack of proper equipment to handle toxic substances, the use of prohibited agrochemicals and the pollution of natural water sources in areas surrounding the farms. Flower farms have also been criticized for their wasteful use of water to spray flowers and electricity to heat greenhouses.

Not all these shortcomings blight the flower industry the way they used to. Some international growers have made monumental efforts to change for the better. The tightening-up of practices has been driven by several factors: fear that bad publicity would kill the industry; activists pushing for more equitable trade between rich and developing countries; environmentalists demanding better farm practices; growers targeting more sophisticated consumers in niche markets; and scientists inventing better products to reduce the use of toxic chemicals.

Another key driver I learned of was that European consumers -- voracious buyers of flowers -- began to demand proof that their blossoms were grown in safe and fair conditions. Certification programs such as Fairtrade and the Rainforest Alliance claim that they are both forcing the industry's improved performance and documenting it.

Certification programs in other areas have successfully introduced the idea that responsible consumption of products like coffee, chocolate and even lumber should include the concepts of fair trade and sustainable farming. But flowers have lagged behind, and Canadian consumers are not generally aware of programs like the Fairtrade and Rainforest Alliance certifications for flowers.

To find out whether these programs are truly producing a more humanely cultivated and even "greener" bouquet -- and whether we flower-loving British Columbians are contributing to that change -- I travelled in April to Colombia and Ecuador. In Colombia I visited flower farms certified by the Rainforest Alliance whose roses, gerberas, lilies and other blooms are for sale at Whole Foods Market, Costco and some other B.C. retailers. In Ecuador I saw farms that are pioneering Fairtrade's certification in South America, and whose roses are available at Choices Markets, South Burnaby's Buy-Low Foods, and local florists such as Olla Flowers in Vancouver's Gastown. 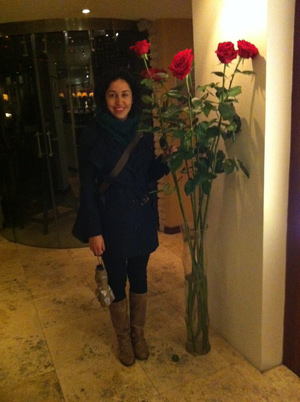 Writer Gabriela Perdomo next to a vase of 5' 8" Ecuadorean roses.

It's been a rich experience. Most flowers in Colombia are grown in the fertile Bogota Savanna. Hundreds of acres of plastic-covered greenhouses cut across this vast and temperate Andean valley 2,600 metres above sea level. You'd think this might be an ugly sight but, oddly, it isn't. More than 30 years of flower farming have absorbed the greenhouses into the landscape.

In Ecuador, I traveled to the Cayambe region, an hour outside Quito, where water from a glacier atop the Cayambe Volcano turns the desert back into fertile land. At 3,000 metres above the sea, this valley is even higher than the Bogota Savanna, which means roses grown here develop very big heads on large, strong stems. That has made them favorites on the world market. At one Quito restaurant where I couldn't resist standing next to a vase of export-quality Ecuadorean roses, I was shocked to see the blooms stood at least four inches above my head -- and I'm 5'4"!

Over the coming days I'll report in more detail on what I found when I followed the flower trail back to the mountain valleys that grew nearly two out of every three blossoms Canadians will enjoy this weekend. From what I have seen so far, however, I can tell you that certified farms do seem to be truly improving labour and environmental conditions on the ground.

In North America alone, an estimated $1.9 billion is spent on flowers every Mother's Day. I can't think of a better Mother's Day gift than flowers. I know that no soap or fancy silk scarf can make my own mom's face light up the way a bunch of fresh lilies can. Flowers are a graceful and powerful presence in our lives. That's all the more reason we should be aware of where they come from and how they are produced -- especially on the industry's biggest sales weekend.