[Editor's Note: Canadians are buying more flowers than ever, and most come from greenhouses as distant as Colombia and Ecuador. Nurseries in developing countries have been called hard on the environment and exploitive of workers -- conditions that 'fair-trade' programs have gone some way to relieve, as Gabriela Perdomo reported earlier in this reader-supported Tyee Fellowship series. Still, the tulip and daffodil fields of the Fraser Valley anchor a B.C. flower industry worth $333 million a year. In her fifth and final report, Perdomo checks out how B.C.'s buds stack up against the certified variety from South America.]

It was still cold and dark outside just before 6 a.m. on a chilly morning in March when I approached the large warehouse in Burnaby that houses the United Flower Growers (UFG) auction. In the parking lot, flower farmers from all over British Columbia unloaded pink, yellow, and purple tulips by the bucket. Inside the no-frills building, dozens more people arranged the flowers by lots on steel wagons in preparation for the next three hours, during which thousands of blooms would change hands in the largest Dutch-style flower auction in North America.

About the Fellowship Funds

The unusual auction works backward. Sellers set an opening price for a wagon-load of blooms. Then a clock starts ticking while the price drops by the second. Buyers must judge how long to wait before they make an offer and 'stop the clock' to get the product for that price. If they wait too long, another bidder may scoop the deal. On the late winter morning I was there, the first local tulips were selling cheap -- 25 cents a stem. Local retailers sell them tied in five-stem bunches for five to eight dollars.

I was there as a guest of UFG marketing representative Bob Pringle. Tulips, he said, are B.C.'s number one floral product. "The auction sells about 11.5 million of them each year," he told me. The UFG itself is a co-op of B.C. flower growers. Through the auction, which operates online as well as in-person, the co-op sells flowers to wholesalers and florists from all over Western Canada. Just under 90 per cent are grown in B.C., Pringle said. The rest are imported, mainly from South America with some coming from Asia.

In earlier installments of this Tyee series, I reported on how fair trade certification programs have improved labour and environmental standards in greenhouses in developing countries, where most imported flowers come from. But what about flowers from here? How are they grown? Do B.C. standards on agrochemicals, for example, measure up to what labels like Fairtrade and Rainforest Alliance have achieved in South America?

The Fraser Valley is a major hub of floriculture -- the professional cultivation of flowers. According to Flowers Canada Growers, an industry association, B.C. farmers grow one-quarter of all flowers cultivated in Canada, and sell about a third of a billion dollars worth of blooms each year.

But many shoppers seem unaware. Metro Vancouver's successful farmers markets are a testament to consumer preference for local products. But when it comes to flowers, many of us don't know whether we're buying local or imported. It can be hard to tell. Flowers pass through many hands before reaching consumers.

Often florists themselves don't know where their flowers come from. They buy mainly from wholesalers, who buy from importers or the Burnaby auction. Much information gets lost. I randomly interviewed some florists in Vancouver to see how much they could tell me about where their flowers were grown. Most didn't know that some were from B.C. Few of those who did bothered advertising B.C.-grown blooms as 'local.' One reason, they explained, is that any given bouquet might include anything from locally grown tulips to Colombian gerberas to greens imported from California.

The UFG's Pringle believes most British Columbians neither know nor care where their flowers come from. "Some buyers are obviously knowledgeable," he said, "But most surveys have shown that that is not a major buying criteria."

Megan Branson and Dionne Finch disagree. The two own the lush Olla Flowers shop in Vancouver's Gastown. They believe B.C. has a market not only for locally grown produce, but for sustainable, organic and fairly traded plants and flowers. Indeed, it's their business model. The two got into the flower business by selling what grows in their own gardens --something they still do. As Finch says, "Why not?"

They remain committed to buying from other local growers. But Branson is frustrated by the lack of information available at the UFG auction about how the plants or flowers for sale are grown. "Are they local?" she is left wondering. "Were they fairly traded if imported? Are they organic?"

Branson and Finch have gathered an eclectic bunch of local flower providers who meet their standards. Solefood Farm is especially unusual. Operating in Vancouver's Downtown Eastside, it empowers at-risk residents by turning them into urban farmers who cultivate garden plants, flowers, and produce. Everything they grow on an empty lot at the corner of East Hastings and Hawks Avenue is organic and sold directly to local florists, restaurants, and retail shops.

Okanagan Fair Flowers is another of Olla's providers. It grows organic seasonal flowers and plants in the Okanagan's Similkameen Valley. Safder Alladina, its founder and owner, says he'd like to "reintroduce the old concept of not importing flowers from all over the place," to British Columbia. His harvest has turned up at Choices Markets and Whole Foods, but Alladina prefers working with small customers like Olla and the Rocky Mountain Flat Bread Co. restaurant in Vancouver. 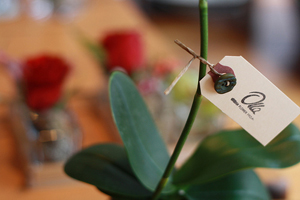 When they want to supplement their local bounty with more exotic flower varieties, Olla's Branson and Finch seek out fair trade certified supplies. Their roses are the big-headed tall variety I saw growing at the Ponte Tresa Farm in Cayambe, Ecuador, as I reported in the second article of this series.

Three major supermarket chains -- Choices Markets, Whole Foods, and Costco -- also advertise their support for locally grown flowers. And for these retailers, "local" is usually not enough. All demand some sort of certificate proving that the flowers have been grown in a sustainable and socially responsible way.

Murphy and Crockett share a concern with Olla's Branson and Finch: local doesn't always mean sustainable. As Branson told me, local florists and retailers with high environmental standards usually face a dilemma. They can get certified organic flowers from California or conventional flowers from their own backyard. Which is better?

They want their Good Roots Farm to be recognized as both local and organic. That, Murphy explained, means using "no chemical fertilizers, pesticides, or herbicides." The diversity of the farm should help. "Instead of having mass acres of one thing," Murphy says, "we have vegetables and we have flowers and different types of things. Hopefully it will all work together, so instead of spraying with pesticides we can have a natural population of predators."

Good Roots is a rarity, however. As the UFG's Pringle told me, most commercial flower growers in B.C. are large-scale producers, who use conventional chemical crop treatments. Pringle says that's okay, because "Canada's labour and environmental standards are high."

"I don't think that's true at all," Murphy objects. "I think people have a really misinformed view of agriculture in Canada. They think, 'Oh, we're in Canada, we have better laws.' It's not the case at all." Murphy cited the example of lilies, a non-native flower that some B.C. growers cultivate year-round in greenhouses using agrochemicals to keep pests and weeds in check. "If you had to drive to the greenhouse and walk in to get them, if you saw the way they were grown," she said, "you'd never buy them." 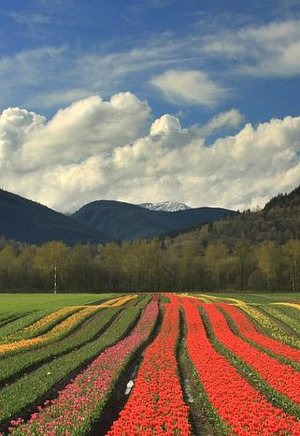 Vancouver environmental lawyer Paula Barrios, an expert in hazardous chemicals, also disagrees that Canadian standards guarantee B.C.-grown flowers to be safe for workers and consumers. "Complete trust in the government is not appropriate," Barrios says, "The problem with toxic substances is that most are still under scrutiny to know their effect on people and the environment. This includes chemicals currently allowed (in floriculture)."

According to Barrios, the Canadian government has begun reviewing 23,000 chemicals currently on the market. A priority list of 200 compounds was identified in 2006, to be assessed and considered for restrictions or outright bans on use. That study continues, with a few chemicals like Bisphenol A (BPA), once found in baby bottles, now banned. The vast majority continue in use, and most B.C. growers use several on the flowers we buy from them.

In the end, our buying choices as consumers may be our most powerful opportunity to ensure our flowers' provenance is as bright and pure as the colour they bring to our tables. Below are some places where you can find socially and environmentally conscious blooms. Look for the Fairtrade or Rainforest Alliance logos on imported stems, and ask for locally grown, or organic blooms. If you know of other retailers where you can shop for flowers with a clear conscience beneath the blush, feel free to mention them in the comments.

A special thanks goes to you, Tyee readers whose donations made this series possible with support of a Tyee Solutions Reporting Fellowship. To find out more about the Tyee Fellowships Fund, click here for info about how to donate or apply.