Empowered in Calcutta: Story of a Sex Workers' Co-op

[Editor's note: This article is third in a series adapted with permission from the chapter "Daughters of Kali" in the book Humanizing the Economy: Co-operatives in the Age of Capital, New Society Publishers.]

Braided throughout the stories of prostitutes told in this series of articles, binding those stories together in a pattern, are the three elements that underpin the sex trade in Sonagachi and most everywhere else: poverty, patriarchy and powerlessness.

All the women I spoke to, both individually and in groups, were driven to sex work by the desperation brought on by poverty. The money they earn, especially if they are new to the trade, is siphoned off to support an intricate superstructure of pimps, thugs, madams, landlords, moneylenders, police and the politicians who sit at the top of the heap. For all of these, it is essential that sex work remains an underground activity that is never legitimized.

Legitimacy would mean the end of graft, the system of payoffs and bribes that feed the spectral figures that loom behind every woman working the street. This is the system that maintains the internal exploitation of the trade and the perpetual poverty at the bottom.

Outside, in the villages where most of these women come from, the pattern is the same if more difficult to discern. The women are still at the bottom, do the hardest work for the least money, have the fewest options. The subjection they endure is systemic and essential to the patriarchy that still rules India. As the stories I've shared with you this week show, the humiliation of women through sexual harassment in the workplace is a pervasive phenomenon.

Everywhere in India, women are expected to submit to the continuous sexual advances of their male co-workers. In the unskilled professions, particularly the construction industry, women workers are required to service their male counterparts if they hope to keep their jobs. It is a major factor in women's decision to take up sex work.

The habitual behavior of Indian men, impelled by a mix of sexual frustration and gender entitlement, drive many women to the trade while the men themselves provide the market that sustains it. The fact that there is so little protection for women, so little recourse for complaint and restitution, is what makes this chain of economic dependence, sexual harassment, exploitation and social ostracism so profoundly unjust.

As was bitterly remarked by the women of Sonagachi when they sought medical treatment, the same physicians that refused to treat them in the daytime would be their customers at night.

The ostracism and discrimination that sex workers face extends to their children. To be a known child of a sex worker means social humiliation, exclusion from schools and banishment from the innumerable social activities that make a child part of the broader community.

Then there is the issue of human trafficking. Every day, dozens of young girls arrive in Calcutta as indentured slaves to the sex trade, many from the poor backwaters of Nepal or Bangladesh. They are part of the vast land of lost souls that populate the sex trade stretching across the face of Asia and feeding the unappeasable appetites of a market that grows daily.

Combating trafficking and the entry of minors in the sex trade has been a major priority for Durbar in Sonagachi and throughout West Bengal. Once a minor has been identified in the trade, Durbar members often intervene directly with brothel owners and pimps to encourage them to release these minors, arguing that their employment only harms the trade and provides an additional reason for police and political harassment.

Durbar members also help unite minors with their families and assist them in getting into school. The association also runs its own residences, training facilities and schools that provide essential support to minors who, for one reason or another, cannot be returned to their families.

When the first base-line survey was completed by the Sonagachi Project in 1992 over a quarter of the women working in the sex trade were minors. By 2008, that figure had dropped to an astounding 0.5 per cent.

Through skilled and patient organizing, and a growing capacity for the creation of community through co-operation, Durbar and its constituent organizations have granted sex workers the power to defend their interests and emerge from the shadows of their trade. But more than anything, the work of Durbar illustrates that in the extreme circumstances of a marginalized and exploited community such as sex workers in India, political activism alone is insufficient.

The power of new community

The heart of Durbar's success is its capacity to create a new community. And what made this possible was the forging of a new social identity for its members. Co-operation and the sense of mutual need were essential to this task.

By working together to solve mutual problems sex workers began to identify with each other not as isolated and competing individuals but as a group with a common identity and a shared experience. Co-operation gave them a new social identity. This was, and remains, an identity they have forged for themselves. Of all the gifts that co-operation has given them, from credit and financial security to the education of their children, this sense of a new self, of a common social identity, is by far the most precious. It is the foundation and future for everything else. As every organizer knows, the first step to empowerment is the recognition of self-worth and the identification of one’s interests with that of others. Political mobilization depends on this.

Since the Sonagachi Project began and sex workers started organizing, the impact on the lives of Durbar members and the broader community has been immense. The association has established 12 HIV and general health clinics that see more than 3,000 patients a month. Forty per cent of these patients are male. The use of condoms among sex workers in Sonagachi has gone from 2.7 per cent in 1992 to 86 per cent today, the highest in India. The prevalence of HIV infection among sex workers has stabilized at around 5.2 per cent. By comparison, the incidence in Mumbai and Chennai is over 20 per cent.

The creation of 32 literacy centers for adults and children alike has tripled the literacy rate among sex workers from 4 per cent in 1992 to 12 per cent in 2005. Four hundred adult sex workers and over 700 children are enrolled in these programs.

Among the children enrolled at Durbar learning centers, over 77 per cent have been admitted to mainstream schools, slowly reversing the institutionalized discrimination of the school system against the children of sex workers. The incidence of violence and abuse against sex workers in Sonagachi has fallen dramatically. The women refuse to submit to it. The beatings and rapes that they endured at the hands of thugs and police have subsided. Perpetrators know that the impunity they enjoyed for years is over.

Despite these achievements, and despite the undisputed power of Durbar as a model for grass-roots organizing within the sex industry, the challenges faced by the sex workers of Sonagachi and elsewhere in India are still immense.

The legitimation of sex work, the primary political issue for the movement, is also laden with difficulty. Even among Durbar supporters this issue presents problems. Some believe that if sex work were to be decriminalized it would become an acceptable option for more women, particularly from more affluent families. Their entry into the trade could adversely affect the incomes of the mainly poor women who now work in the industry. Legitimization would also entail government regulation and oversight, something sex workers reflexively resist. 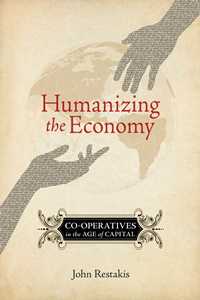 This article is excerpted from Humanizing the Economy: Co-operatives in the Age of Capital by John Restakis (New Society), a global survey of co-op success stories.

The moral questions that surround sex work are not so easily dispensed with by the claim that prostitution is a profession like any other. It isn't. If sex work is an extension and expression of gender inequality and abuse, unless these social conditions are changed the trade itself is tainted. Legitimization without reform means normalizing the social attitudes and conditions that have driven so many of these women to the trade. This is a conundrum that has no easy solution despite what anyone, including sex workers, say.

What is clear is that the current criminalization of sex work leads neither to social change -- in fact, it is essential to maintaining those very systems of abuse and exploitation -- or to improving the condition of sex workers, and, least of all, to ending the practice.

It is also clear that without the economic and social power that their organizations give them, sex workers will continue to labor in the shadows.

Durbar is dragging these discomfiting issues into the light and, in the process, rehumanizing sex workers as women of value with a place of their own to claim in society. The co-op form, directly embodying and expressing the true voices of these women, is an absolute necessity in this struggle. The democratic and communitarian character of their co-op not only binds the women together in a shared sense of identity, it acts as the primary means for mediating their common interest with the rest of society. The co-op and the broader collective of Durbar itself provides them with a public face and a political voice.

Durbar reveals that in India what separates the sex worker from the respectable housewife is not morality but poverty, powerlessness and misogyny. It is a revelation that makes possible the reclamation of self worth for the sex worker while damning the social conditions that make sex work a necessity.