Vancouver's two major newspapers are sponsoring a government-run centre that will tell international media covering the 2010 Winter Olympics about how the province is dealing with homelessness issues in the city's troubled Downtown Eastside. 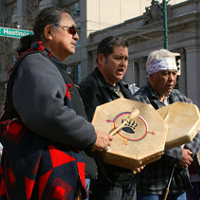 Media observers say The Vancouver Sun and The Province should investigate the veracity of the information that will be presented by the centre, not sponsor it. But The Province's editor-in-chief has said that sponsorship deal would only create a conflict of interest if it had been arranged by the paper's newsroom -- which it wasn't.

News that BC Housing and the City of Vancouver wanted to establish a centre to "showcase the range of programs and services that have been undertaken to address the issues of homelessness" was first reported by Public Eye in November.   "We think there's a good story to tell about what we've done in B.C. for homelessness, mental health, drug addiction," Housing and Social Development Minister Rich Coleman later explained in an interview with The Globe and Mail's Frances Bula.

Now it comes to light that six private sector interests -- including The Vancouver Sun and The Province -- are sponsoring that centre, which is being set up in the Woodwards building and will also target the city's international visitors.

A spokesperson for BC Housing confirmed the newspapers, which are published by CanWest Global Communications Corp.'s Pacific Newspaper Group Inc., are "providing promotional ads about the centre while it is open in February."

Reached via email, The Vancouver Sun's editor-in-chief Patricia Graham stated she didn't know anything about the deal.

Nor was The Province's editor-in-chief Wayne Moriarty aware of that arrangement, stating, "That's not my department."

But, that being said, Moriarty explained, "We have contra deals with all sorts of agencies and people we report on. And there's lots of things the company does in terms of giving space away and cross-promotion and free promotion that could be viewed as a conflict if it was run out of a newsroom. But it isn't."

Instead, those things are run out of Jamie Pitblado's department. He's the vice-president of promotions and community investment for Pacific Newspaper Group.

"We certainly think it's an opportunity to shed some light on the homelessness issue at a time when it will be front and centre in people's minds -- not just international media but local people who live here and visitors who come here," Pitblado told Public Eye when asked about the reason for the sponsorship.

Is he concerned the centre is being run by the government, whose motivation may be different from the media's truth-telling mission?

"No," the vice-president responded. "We support lots of private sector programs. We support some public sector programs. We believe part of our role as one of the leading media outlets here is to engage our community, spark debate, discussion and dialogue and see if it can make a difference."

Pitblado declined to disclose the value of the advertising being given to BC Housing, which he said wouldn't be a "significant contribution of our inventory."

Moriarty said The Province's newsroom is also providing BC Housing with free access to photos from its Operation Phoenix series of stories -- which reported on what was working and what was broken in the Downtown Eastside.

"They've asked us for some editorial support in terms of the use of our photos for helping when all the media come in to the Downtown Eastside," he said, adding the newspaper has reviewed that support and determined it won't constitute a conflict of interest.

But not everyone shares Pitblado and Moriarty's opinions.

"That's shocking," said University of Victoria journalism professor Lynne Van Luven, when told about the free advertising. "I don't think that either major paper in a city as plagued with social problems as Vancouver should be engaging in that sort of venture."

"They should be, in fact, standing away from it and looking at it and writing stories about it and trying to find out if it indeed is whitewashing the homeless problem or if, in fact, this BC Housing gambit is actually legit," she continued.

That view is shared by Klaus Pohle, a specialist in media ethics at Carleton University's school of journalism.

"It's a conflict of interest. Newspapers shouldn't be in the business of promoting anything like that. They should be reporting it. And, if they do report on it (now), it becomes suspect because they're involved in it," he said.

"If this centre turns out to be a bust or whatever, they're not going to report on it honestly because they're part and parcel of it. There can't be arms-length reporting of something in which you're involved."

Four firms connected to the real estate development industry have also signed-on to sponsor the centre.