Camilo Sanvezzo is an ex-Vancouver Whitecap, mere months after winning the Major League Soccer (MLS) 2013 scoring title with 22 goals for a team that missed the playoffs, and scoring one of the most spectacular markers of the year in all of soccer (see above). 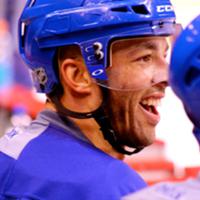 Gays and Hockey, Breaking the Ice at Last

After three seasons, Sanvezzo goes from the Whitecaps to the White Cocks, or Gallos Blancos, of the Mexican first division's Quer&eacutetaro FC.

After becoming the face of the Whitecaps in 2013 -- a franchise that has had four coaches and only one road playoff game to its credit after three MLS seasons -- the Brazilian evidently wanted a raise from his less-than-$250,000 salary to the million-dollar-plus designated player range.

The Whitecaps seemed to be initially caught off-guard by the Sanvezzo-to-Quer&eacutetaro story broken by ESPN Deportes, then denied it would or could happen. A player under contract cannot unilaterally decide to move. But that all changed when photographs of Sanvezzo wearing the white, orange and blue of Quer&eacutetaro were tweeted and the Whitecaps were shown who could decide what could or would happen. The initial New Year's Day shock to Whitecaps' fans turned to disgust at the perceived lack of loyalty by a player who had once talked about becoming a Canadian citizen.

It is fitting that Sanvezzo's rise and departure came within a few months of the Vancouver Canucks' reconciliation with Pavel Bure. Not since Bure had a player excited Vancouver sports fans or produced goals of such high quality or quantity. Coincidentally, the 'Russian Rocket' was traded away to the Florida Panthers on Jan. 17, 1999 -- exactly 15 years before Sanvezzo's transfer. The Russian Rocket had similarly butted heads with management and forced a trade even. Instead of defecting to another team, he stayed in Moscow in fall 1998 and enjoyed the nightlife.

Together, they're among five sports stars that Vancouver could've kept or could've had.

Pavel Bure, the Russian Rocket, was the NHL's rookie of the year in 1991-1992 for the Canucks and recorded 60-goal seasons in 1992-1993 and 1993-1994. The $8-million-a-year superstar eventually wanted out of Vancouver and stayed home in Russia instead of reporting to the Canucks in fall 1998. General manager Brian Burke reached a multi-player deal with the Florida Panthers on Jan. 17, 1999. Bure, who had scored 254 goals over seven years in Vancouver, was represented by agent Mike Gillis, the future Canucks' general manager.

Bure became the first player inducted to the Hockey Hall of Fame as a Canuck in November 2012. His number-10 jersey was retired almost a year later, on Nov. 2, 2013, in Vancouver.

The Vancouver Grizzlies had two chances to bring Steve Nash to Vancouver.

Victoria-raised Nash's talent was obvious, but his rise to stardom and his back-to-back NBA Most Valuable Player awards couldn't have been predicted. Still, a homegrown player wearing the baby blue would've spurred greater local interest and may have delayed or stopped the team's 2001 flight to Memphis. Even before the 1996 draft, there was much buzz about bringing Nash back to B.C. But the Grizzlies instead chose Shareef Abdur-Rahim third overall. They could've had Nash or even Kobe Bryant.

Vancouver hosted the 1998 draft and the Grizzlies chose Mike Bibby second overall but could have made a deal for Nash in front of the hometown crowd, as many were urging them to do. At that draft, the Milwaukee Bucks flipped German Dirk Nowitzki to the Dallas Mavericks. The Phoenix Suns shipped Nash to the Mavs. The two went on to form one of the best partnerships in the game for many years. Nash was in play but the Grizzlies missed out.

Nash, an avid soccer player and fan, is now part owner of the Vancouver Whitecaps, the team his brother played with for many years.

Three years later, the Grizzlies were in Memphis.

The Great One that got away, twice

Before he became a Los Angeles King and became the NHL's lever for southern expansion, Wayne Gretzky almost became a Vancouver Canuck.

Edmonton Oilers' owner Peter Pocklington began shopping the Great One around after the club won the 1988 Stanley Cup. He offered him to Vancouver for $22 million and five first round draft picks, but he was sold to the Kings on Aug. 9, 1988 instead, for $15 million and three first round picks. Marty McSorley and Mike Krushelnyski accompanied number 99 to La-La Land, while Martin Gelinas and Jimmy Carson were shipped to Northlands Coliseum. On March 23, 1994, Gretzky broke Gordie Howe's all-time scoring record, netting number 802 against the Canucks' Kirk McLean in L.A.

The Kings traded Gretzky to the Blues during the 1996 season and he went shopping for a new team that summer. Vancouver, owned by John McCaw, had the framework for a deal. Gretzky wanted to sleep on the offer. Stanley McCammon, McCaw's top executive, couldn't wait until morning and wanted Gretzky and his manager to agree in the middle of the night. Gretzky, unhappy with the ultimatum, later signed with the New York Rangers where he recorded 249 points in 234 games over his last three seasons.

Gretzky eventually did play, and score, for Vancouver in a different arena. He lobbied the International Olympic Committee in 2003 for Vancouver's successful bid for the 2010 Winter Olympics and he was among the final four torchbearers, with Nash, at the Feb. 12, 2010 opening ceremony. Afterward, he was trucked to Jack Poole Plaza to light the permanent outdoor cauldron.

Flutie debuted as a pro with the USFL's Donald Trump-owned New Jersey Generals in 1985, but was a backup with the Chicago Bears and New England Patriots until coming north. He played two years for the Lions, dazzling fans with his fleet scrambles as well as his passing, winning the CFL's Most Outstanding Player Award in 1991 with 38 touchdown passes, 14 rushing touchdowns and 6,619 yards passing.

Financially troubled Pezim would eventually let the team go bankrupt in 1992, after he let Flutie get away to the Calgary Stampeders, where he led them to the 1992 Grey Cup title. He won two more in 1996 an 1997 with the Toronto Argonauts. In 2006, TSN named the three-time Grey Cup MVP Flutie the CFL's greatest player of all-time. Flutie returned to the NFL in 1998 for eight seasons with the Buffalo Bills, San Diego Chargers and New England Patriots.